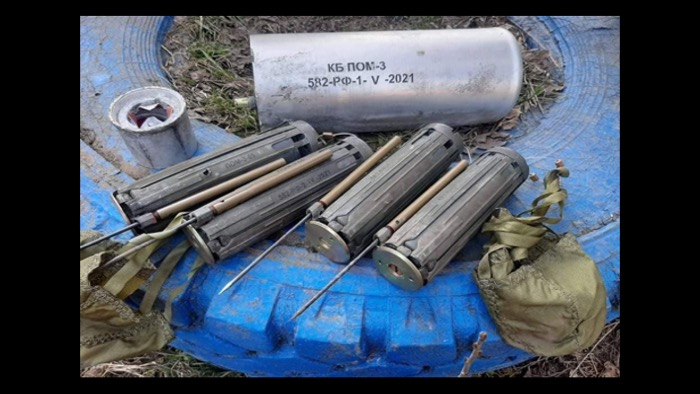 Russia is now turning to illegal weapons in desperation as they struggle to get out of the quagmire they created in Ukraine.

The illegal weapon adds to the many war crimes Russia has committed in the past month. Some of which include sending a rocket into a maternity ward, shooting fleeing refugees, firing at nuclear reactors, bombing a theater filled mostly with children. That theater was clearly labeled with the word “children” in Russian (дети).

Russia assumed it would have an easy time defeating Ukraine. All predictions were that they would take over the country in a few days. But they entered Ukraine with untrained force. Also, people trying to hold on to their country have a mental advantage over invaders who think they are going on a training mission. As a bonus, Ukraine has an incredible leader like Zelenskyy.

The new reports are that Vlad’s war criminals are using illegal landmines. The POM-3 was made illegal in the 1997 Mine Ban Treaty  Neither Russia nor the U.S. signed the treaty, but Ukraine has. Originally the treaty was signed by 133 states. Since 1997 that number has grown to 164 nations.

Russia is deploying anti-personnel mines designed to detect approaching footsteps and then obliterate anything within a 16-metre [17.5 yards] radius in northeastern Ukraine, a human rights report has found.

The POM-3s were discovered in the northern Ukrainian city of Kharkiv on Monday by  Ukrainian ordnance disposal technicians.

POM-3s are designed to be fired into enemy territory and descend by parachute before burying themselves into the ground if the earth is soft enough. They are equipped with a “seismic sensor,” which registers when someone is approaching before launching a bomb. The subsequent blast and shrapnel it projects can cause death and injury.

Some call it the jumping bomb because the launch takes it around head high. 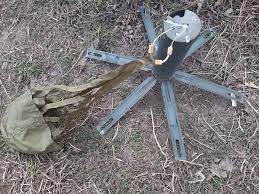 This is not the first time Russia laid landmines in Ukraine:

Earlier in March, an official from the International Red Cross accused Russia of placing landmines along proposed humanitarian evacuation corridors outside of the southern port city of Mariupol. [But not the POM-3]

The U.S. and others have already suggested that Russian war crimes be formally reported to the proper global authorities. There is little doubt that this latest news will be well-examined and thrown on the pile of accusations. The problem is, however, if they are convicted of war crimes, how will the guilty be arrested?