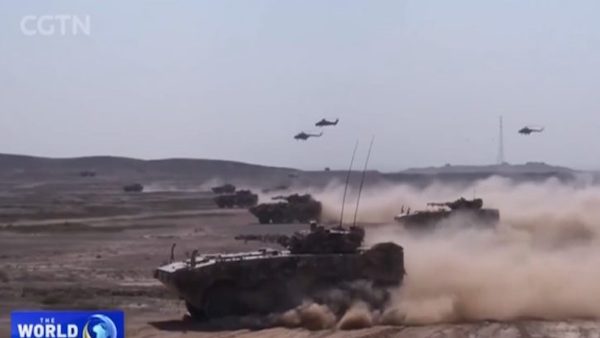 This is a rather interesting development.  Russia and China have sent 10,000 troops to the Ningxia region of north central China for a joint exercise there with ground and air forces.  Russia has deployed motorized infantry, multirole jet strike-fighters (Su-30SM), and air defense systems.  China’s got tanks (which seems to mean armored assault vehicles of various types, based on video footage), self-propelled howitzers, J-20 stealth fighters (making their first appearance in a joint exercise with a foreign force), and advanced early warning aircraft (the KJ-500).

Western media are reporting this as an exercise responding to concerns about stability in Afghanistan, designed to improve Chinese-Russian cooperation against problems like terrorism.

Russia isn’t saying much in English-language reporting, from what I can tell.  But China seems to be talking out of both sides of its mouth.

Western media are quoting a Chinese statement carried by Xinhua, as reflected in this ABC News report:

The official Xinhua News Agency said the exercises began Monday and were presided over by Li Zuocheng, a member of the ruling Communist Party’s Central Military Commission.

The exercise aims to “deepen the joint anti-terrorism operations between the Chinese and Russian militaries and demonstrate the firm determination and strength of the two countries to jointly safeguard international and regional security and stability,” Xinhua said, citing Chinese and Russian officials.

The typical Western article also dutifully notes the potential for Asian security conditions to deteriorate as the Taliban retake Afghanistan. 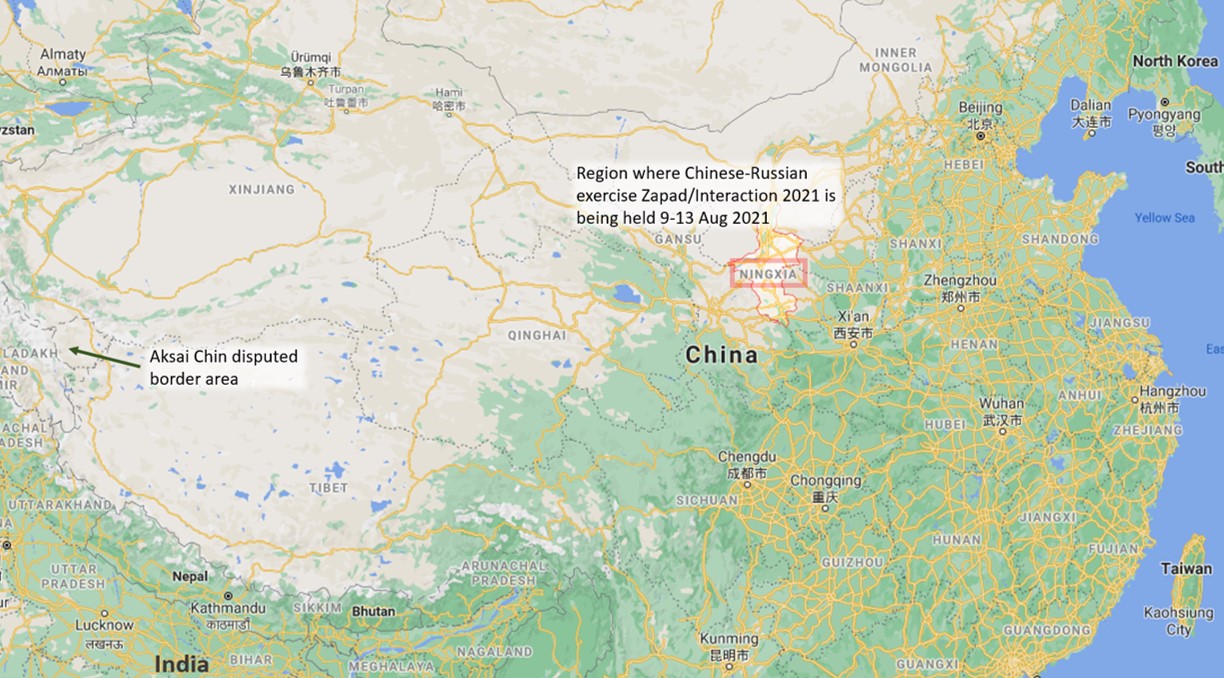 In other Chinese outlets, there’s been somewhat more detail on the nature of the exercise.  China Daily (link at top) contributes this, for example:

More than 10,000 troops from the PLA Western Theater Command and the Russian Armed Forces’ Eastern Military District, as well as about 200 aircraft, more than 200 tanks [note: I haven’t seen main battle tanks in the videos posted so far. – J.E.] and armored vehicles, and over 100 artillery guns from both sides are involved in the exercise at the PLA Ground Force’s Qingtongxia Joint Tactical Training Base.

Troops involved in the exercise will test and hone their abilities and skills in performing reconnaissance, early-warning alerts, electronic strikes and joint assault operations, according to Senior Colonel Wu Qian, a spokesman for the Chinese Ministry of Defense.

CGTN quoted a deputy brigade commander from the Western Command of the People’s Liberation Army (PLA):  “It’s a way to test the combined combat capability. The firepower of this drill has high density. There could be over 100 large-caliber guns fired in a minute in the same place.”

Firing over 100 large-caliber guns in a minute is not a typical combat discipline required to fight “terrorism,” nor is using anti-aircraft artillery.

It’s equally interesting that some of the Western media are referring to the exercise as “Sibu/Cooperation 2021,” seemingly giving it a name conferred by the Chinese.  China, however, is referring to it in English-language outlets as “Zapad/Interaction 2021,” and noting where it falls as the fourth such exercise in a series between the two nations (from China Daily):  “This is the PLA’s first joint exercise with a foreign military this year and also the fourth consecutive joint operation held by the Chinese and Russian militaries since the Vostok (East) 2018, Tsentr (Center) 2019 and Kavkaz (Caucasus) 2020 exercises, which were held in different parts of Russia.”  (Zapad, as a reminder, means “West.”)

Thus, the fourth exercise is named “West/Interaction” and follows “East,” “Center,” and “Caucasus.”  “Zapad,” notably, mirrors Russia’s focus in 2021 for the eponymous massed-force exercise expected to kick off later this month in Western Russia.

The naming scheme doesn’t seem to have a whole lot to do with Afghanistan.  The combat disciplines indicated by the force mix and reporting so far certainly don’t.  There’s no need for stealth air superiority fighters or advanced air defenses, just for starters, for any foreseeable application in Afghanistan, anti-terror or otherwise.

The Chinese training base where the forces have gathered has the following amenities, to be sure:  “Qingtongxia CATTB, established around 2000, includes an urban warfare training village, electromagnetic environment simulation, monitoring, and control systems, as well as a 1:500 scale (900 meters x 700 meters) mock-up of the contested Aksai Chin border region.”

At this point, the exercise doesn’t appear to have involved activities that would be held in the urban warfare training village.  But with the Aksai Chin mock-up, which reflects the disputed border region with India, bringing in Russian forces to conduct large-scale maneuver and firing drills with armor, big guns, and (likely) motorized infantry — as well as air defense and air warfare, and probably aerial strike training in the coming days — would certainly be a way to try to, er, impress India.  Especially if Chinese media put out plenty of descriptive articles and videos. 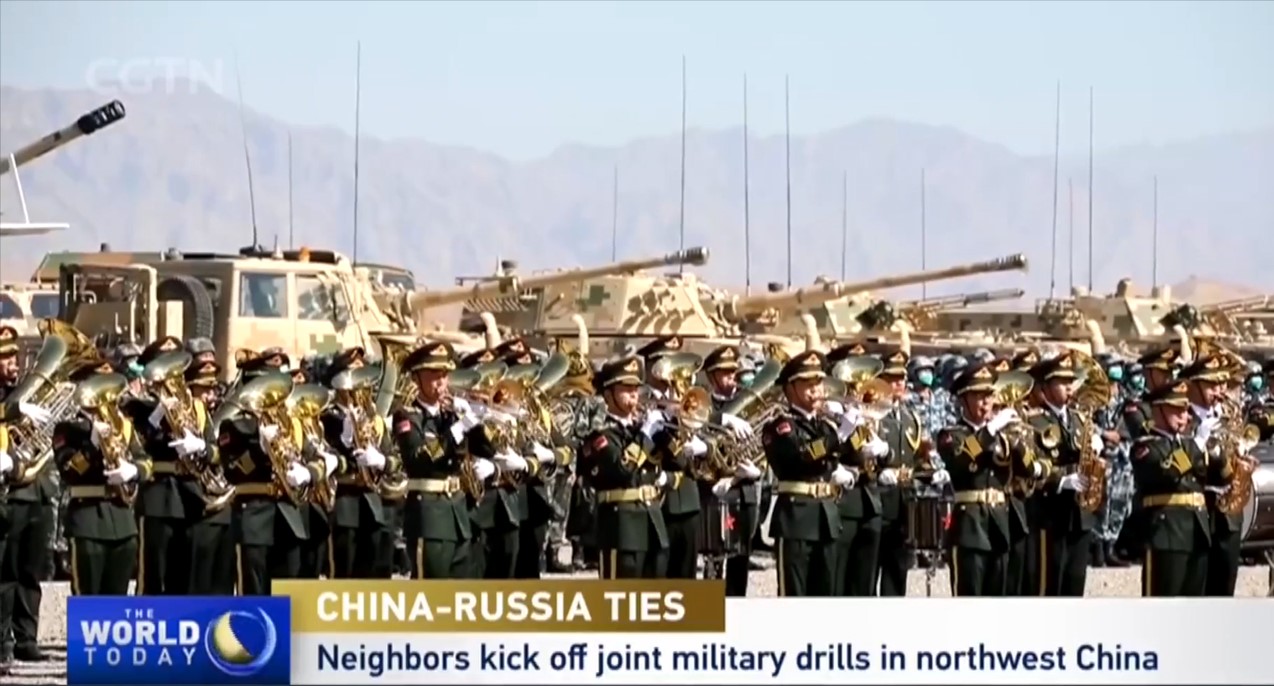 What’s curious is that the Western media seem to just be repeating the Chinese statement retailed through Xinhua without inspecting the situation in a bit more depth.   This is no “anti-terrorism” exercise going on, at least not at this point.  It may eventually include anti-terrorism scenarios.  But given the weapons and force mix and what has been done so far, its fundamental character is an exercise of massed conventional weapon systems for a peer-competitor force-on-force scenario.  It’s what Churchill would call “war war” that they’re practicing out on the edges of the Gobi Desert in Ningxia.

And the disparity in reporting — Chinese media versus an official statement promulgated through Xinhua versus the Western media consensus narrative (plus the factor of comparative Russian silence) — is very informative.  Cui bono?  The Western media’s perfunctory relay of Chinese talking points would be–advantage, China.  Let us make like grasshoppers and learn from it.