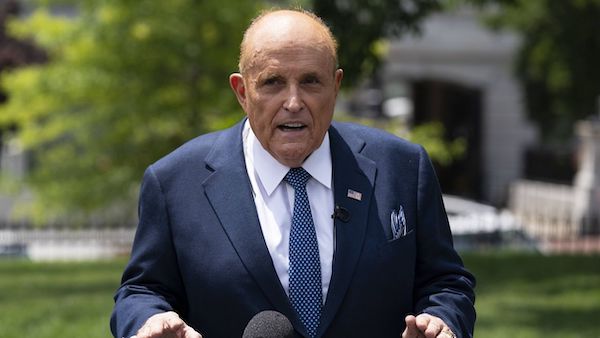 The home of the former president’s lawyer Rudy Giuliani, who was a federal prosecutor and the mayor of NY, was raided by the FBI on Wednesday morning even though he was already answering the DOJ’s questions and offering them the evidence they asked for.

The raid seemed like the latest move by the FBI to go after the Administration of Donald Trump.  Giuliani has been under investigation since  2019 by the Manhattan U.S. attorney’s office as part of the liberal effort to impeach Trump because of a phone call he made to the president of Ukraine. Because Rudy defended Trump against the impeachment hoax, the DA claims that Rudy illegally lobbied the Trump administration on behalf of Ukrainian officials and oligarchs in 2019 ahead of the 2020 election.

Spokespeople for the Manhattan U.S. attorney’s office and the Federal Bureau of Investigation declined to comment.

Mr. Costello in an interview called the move “legal thuggery.” He said that in recent years he had offered to answer investigators’ questions as long as they agreed to say what area they were looking at ahead of time. He said they declined the offer. “It’s like I’m talking to a wall,” he said.

Executing a search warrant on a lawyer—particularly a lawyer for a former president—is an unusual step for prosecutors to take.

Costello’s issued a statement that said in part:

“Twice, Mr. Giuliani’s counsel offered to sit with the SDNY and demonstrate that Mr. Giuliani’s conduct was lawful,…It is outrageous that the Trump Derangement Syndrome has gone so far that the hatred has driven this unjustified and unethical attack on the United States Attorney and Mayor who did more to reduce crime than virtually any other in American history.”

Of course, I’m sure you will not be surprised that the FBI left behind the only electronics that contain evidence of crimes, the Hunter Biden hard drives. Mayor Giuliani offered them on several occasions,  but the agents steadfastly declined.  Keep in mind that the agents could not read the physical hard drives without plugging them in, but they took Mr. Giuliani’s word that the hard drives were copies of Hunter Biden’s hard drive and did not contain anything pertaining to Mr. Giuliani.  Think about what that tells you. Their reliance on Mr. Giuliani’s credibility tells you everything you need to know about this case.

Andy Giuliani. Rudy’s son made a statement after the raid:

Folks, this is another example of liberals using our DOJ to go after Donald Trump.  It’s long past time for them to move on. But they hate Donald Trump more than they love America—so it’s up to us to vote them out of office.