Come On Rudy: Enough Teasing, If You Have Proof Show It 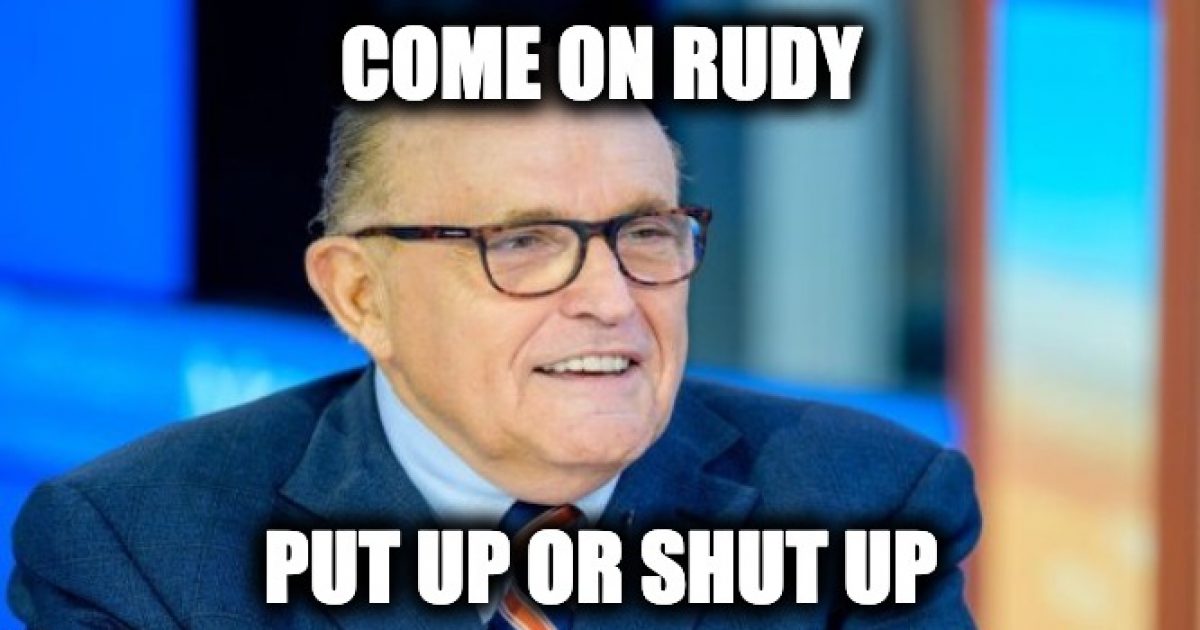 On Fox News, Ed Henry asked  Rudy Giuliani if he spoke to the President since he was part of some of the witness testimony in the bogus impeachment hearings. His answer raised some eyebrows:

You can assume that I talk with him early and often and have a very, very good relationship with him, and all these comments — which are totally insulting — I mean, I’ve seen things written like he’s going to throw me under the bus. When they say that, I say, ‘He isn’t, but I have insurance.’”

He wasn’t talking about insurance like Blue Cross Blue Sheild. He tweeted later in the day that the insurance was just a sarcastic remark.  Giuliani added he has “files in my safe about the Biden Family’s 4 decade monetizing” of the former vice president and senator’s office. “If I disappear, it will immediately appear.” He also talked about the “RICO chart.” implying that he has still unreleased information about the mafia from his days as a U.S. Attorney.

The statement I’ve made several times of having an insurance policy, if thrown under bus, is sarcastic & relates to the files in my safe about the Biden Family’s 4 decade monetizing of his office.

If I disappear, it will appear immediately along with my RICO chart.

I don’t understand –if he really has the docs, why doesn’t he release them? Not the Rico chart that might earn him a bullet and a hitman saying, “leave the gun and take the cannolis.” But the Biden documents, their release would undoubtedly help his client, Donald Trump, defend himself in the impeachment hearings right now.

Earlier that day, Rudy Giuliani tweeted that he “discovered a pattern of corruption that the Washington press covered up for years! I’m also going to bring out a massive pay-for-play scheme under the Obama Administration that will devastate the Democrat Party.”

I discovered a pattern of corruption that the Washington press covered up for years!

I’m also going to bring out a massive pay-for-play scheme under the Obama Administration that will devastate the Democrat Party.

Do you honestly think I’m intimidated?

Adding to the bravado, Rudy said.

The Mafia couldn’t kill me so NO, I am not worried about the swamp press!

Rudy was a great  U.S. Attorney for the Southern District of New York, he put three of the heads of New York’s so-called “Five Families” in jail under the RICO act, went after Wall Street criminals like Ivan Boesky and Michael Milken, and amassed a record of 4,152 convictions with only 25 reversals. And he is credited with making the perp walk a common occurrence.

As Mayor, he is credited with cleaning up NYC, and when 9/11 happened, he not only brought the city together but helped to unite the country, which earned him the title of America’s Mayor.

But all that aside, he still has to prove what he says. I am not saying that Rudy Giuliani is lying about his safe full of Biden papers or his proof of a pay for play scheme under Obama, but they are just words. Being a New Yorker, he probably understands the Yiddish phrase “tuchus oyfn tish,” literally “put your arse on the table,” and that’s what the Mayor has to do now, put his cards on the table.

If Rudy Giuliani really has all the things he tweeted about, he should put up or shut up.  Without proof, all he is doing is teasing, and in today’s time, with Biden’s actions in Ukraine being a big part of the impeachment hearings, and the belief by many that President Obama was behind setting up the Russia-gate spying of President Trump teasing only generates more rumors.  America doesn’t need more rumors they do nothing but divide the country,  we need proof.