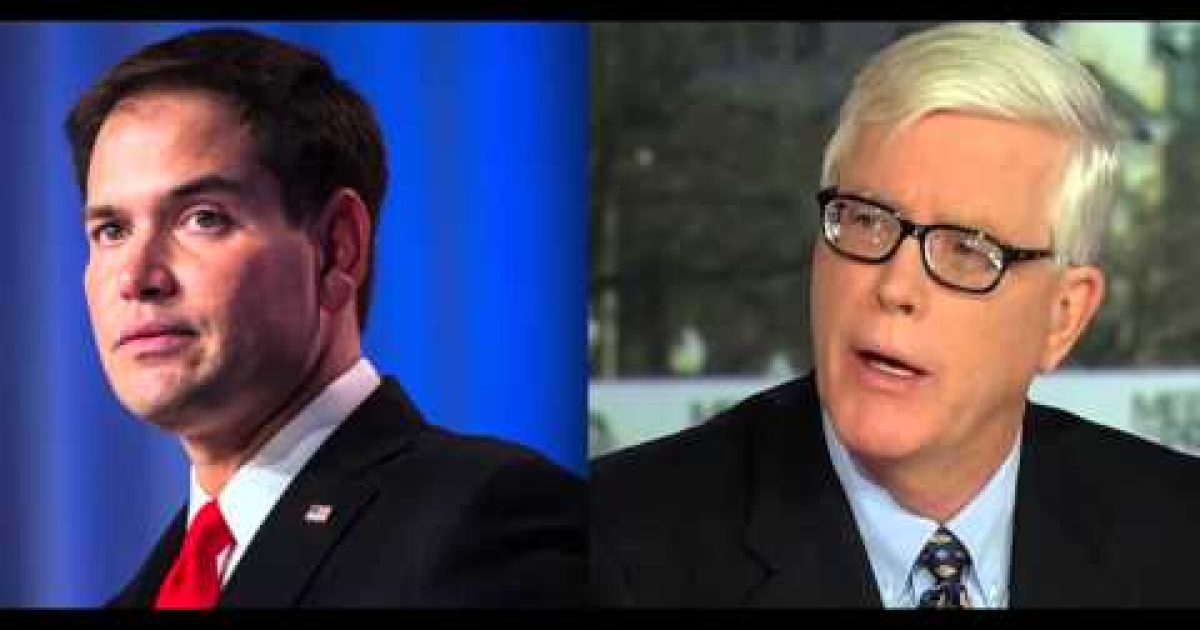 Marco Rubio was a guest on Tuesday evening’s Hugh Hewitt Show. The two discussed a wide-range of topics, the most timely of which were the Iranian nuke talks and Obama’s trashing of Benjamin Netanyahu and Israel.  On Iran, Rubio was clear, if he was to become President he would revoke a deal signed by Barack Obama as the deal wouldn’t be enforceable, wouldn’t cover Iran’s ballistic missile program, or stop Iran’s state sponsorship of terrorism.

As for Israel Rubio was clear, Obama doesn’t even have a professional relationship with Netanyahu after all he sent his entire political team to defeat Bibi.

Below is the transcript for the two segments described above along with the audio for each segment.

Hewitt: Should we walk away from these negotiations in Geneva right now because of the conduct of Iran in other places than that negotiating room?

Rubio: Well first of all, we need to remember what’s not being covered by these negotiations, which are just as important as their nuclear ambition, and that’s the intercontinental ballistic missiles that they’re developing. And it’s very reasonable that before the end of this decade, Iran could possess a long range rocket that could reach the United States, the Continental U.S. They’re rapidly, that’s not even being covered by these negotiations. They’re not even the subject of sanctions. And I think that alone is a reason to be imposing sanctions on Iran, not to mention their state sponsorship of terrorism. That being said, any agreement that allows Iran to retain enrichment capability, leaves in place the infrastructure they will need in five, ten, eight, whenever they decide to ramp up enrichment and produce a weapon, if the only thing standing between them and a nuclear weapon becomes, and the ability to deliver it through a long range rocket becomes the ability to enrich at a higher level, that’s the easiest switch to flip. And you saw the North Koreans follow a model such as this. So I just think the deal is premised on an agreement on something that is totally unacceptable, and quite frankly, abandons almost a decade of sanctions built on the idea originally that they would not be allowed to enrich. And by the way, the Saudis, the Turks, the Egyptians, even the Jordanians have made very clear that whatever Iran is allowed to do under this agreement, they will expect the same. So if Iran is allowed to enrich up to 5%, 20% for research, the Saudis are going to insist on the same capability. And you suddenly are going to have region awash with nuclear infrastructure.

Hewitt: Then let me ask you the three ifs. If that deal is in fact signed by President Obama that allows them to retain enrichment, and if you run for president, and if you win, would you revoke that deal?

Hewitt: Would you go on record and just let them know that’s not going to…

Rubio: Absolutely, and I already have. And the point, because it’s not, first of all, it’s not an enforceable deal as we made clear in the Cotton letter. It won’t survive this president in terms of you know, a future president will have to decide whether to live by it or not. It’s not enforceable. It doesn’t have the force of law. Now if he brings it to the Congress and can get it passed, that’s a different story. He’s indicated that he prefers to take it to the United Nations instead of the U.S. Congress. The second point I would make is that I think it’ll be difficult to reassemble the international sanctions if this falls apart, but nonetheless, we should be willing to lead unilaterally. And I think others will ultimately see it. And the third is I anticipate the Iranians will take advantage of any loopholes they can find in the deal, and I think they’ll flat out try to violate portions of it. You know, Iran has other challenges ahead. They’re going to have a succession fight fairly soon when the Supreme Leader passes from the scene. And it’s very possible that the new leader of Iran, after the current leader vanishes, could be someone even more radical, as hard as that is to imagine. And that’s something to keep an eye on as well.

Hewitt: Last question, Senator Rubio, your speech about Israel last week, I replayed most of it, it was warmly received by most people. Today, the President got a question about his relationship with Benjamin Netanyahu. This is what he said.

Obama: I have a very businesslike relationship with the Prime Minister. I’ve met with him more than any other world leader. I talk to him all the time. He is representing his country’s interests the way he thinks he needs to, and I’m doing the same. So the issue is not a matter of relations between leaders. The issue is a very clear, substantive challenge. We believe that two states is the best path forward for Israel’s security, for Palestinian aspirations and for regional stability.

Hewitt: Senator Rubio, do you believe him on the businesslike relationship?

Hewitt: And what about this two-state solution at this time in this place?

Rubio: No. First of all, he’s wrong on both counts. Number one, he can’t say he has a businesslike relationship or that it isn’t personal when his entire political machine, virtually, some of the top people in his political operation were in Israel, on the ground, trying to defeat Netanyahu, which is unprecedented. You know, he didn’t send anyone in any other country to try to influence the outcome of those elections. And from Jeremy Bird down to others that were deeply and intricately involved in his campaigns in the past, he sent them down there to start the equivalent of a superPAC to try to oust Netanyahu. So I mean, what he’s saying is absurd in terms of it not being personal. That sounds pretty personal to me. As far as the two-state solution, I would say what many Israelis say, which is yeah, that’s the ideal outcome. It’s also the least likely. And here’s why, because you don’t have the conditions today for that to happen. You have a Palestinian Authority that has no interest at this point. Certainly Hamas has none, but the Palestinian Authority has no interest at this moment on being a serious partner for peace. They continue to reward and elevate people they call martyrs, who we call terrorists, who have killed Israelis and even Americans. They’ve walked away from very generous offers over the last, at least twice over the last 15 years that have been made by the Israelis. The conditions just do not exist at this point. They teach their children to hate Jews, that it’s a glorious thing to kill Jews. These are the sorts of things that make it impossible at this moment to have an agreement. And in fact, if you’re standing from the Israeli perspective, what you see is the possibility that that second state that some are calling for would be nothing more than a launching pad for further attacks against Israel in the future.