The Rubble That Could Have Been Jews

80 Years Ago This Week 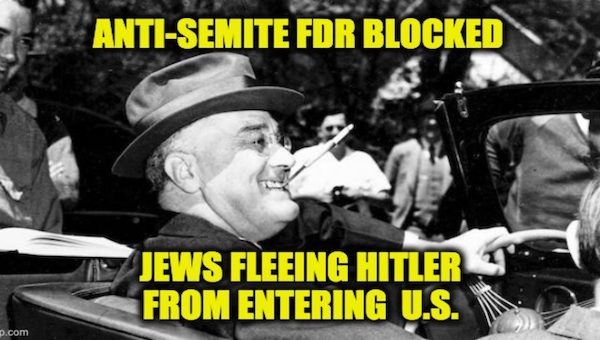 If you walk all the way to the eastern end of Manhattan’s 25th Street, you come upon a small plaque explaining why the site was given the name “Bristol Basin” in June 1942. It does not explain the fascinating connection between that story and the plight of Jewish refugees fleeing from the Nazis.

Throughout the Holocaust, the Roosevelt administration insisted that it had no ships to bring Jewish refugees to the United States. “There just is not any transportation” available for refugees, Assistant Secretary of State Breckinridge Long told a congressional committee in 1943.

In his autobiography, Congressman Emanuel Celler (D-New York) likewise recalled how he was told by an administration official that to rescue Jews, the U.S. would need to “divert shipping for the transportation of war materials and troops for the refugees.”

In reality, American troop-supply ships, known as Liberty ships, were returning to the United States empty after delivering their cargo to Europe. They had plenty of room to carry people on the return trip.

Moreover, the ships needed something heavy on board—known as ballast—to keep them from capsizing. Jewish refugees could have served that purpose. Instead, the ballast was found in the English city of Bristol—or, more precisely, in the city’s remnants. 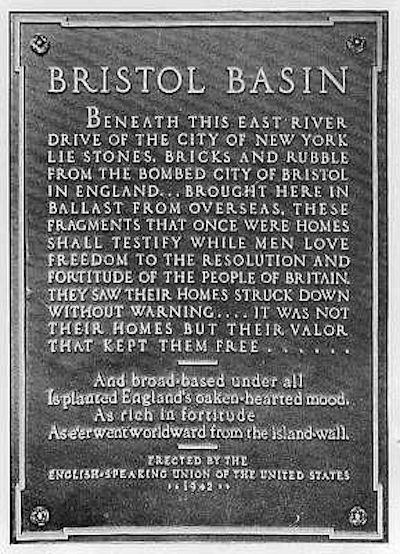 Situated on the southwest coast of England, Bristol was heavily bombed by the Germans beginning in the summer of 1940. Some 85,000 homes and other buildings were destroyed. Liberty ships that off-loaded American men and weapons in the port of Bristol then loaded up on rubble from the bombed-out buildings to make the journey safely back across the Atlantic.

Not only did the rubble keep the Liberty ships afloat, but it served a second important purpose. When the ships reached New York City, they dumped the debris in the East River, between 23rd Street and 34th Street. There it served as part of the foundation for a highway under construction, known as the East River Drive.

“Brought here in ballast from overseas, these fragments that once were homes shall testify while men love freedom to the resolution and fortitude of the people of Britain,” the plaque declares. “They saw their homes struck down without warning. It was not their walls but their valor that kept them free.”

Mayor La Guardia called the naming of the site “a reminder of the fury and cruelty of the Nazi forces.” Nazi cruelty was also of particular concern to Jewish rescue advocates in the United States, who noticed the irony in the Roosevelt administration’s choice of ballast.

The “huge mounds of rubble” brought from Bristol to Manhattan demonstrated that bringing Jewish refugees to the United States would be “no problem at all,” the editors of The Answer (published by the rescue activists known as the Bergson Group) wrote. They argued: “It is as important to devote shipping space to help secure the foundations of humanity by saving lives as it is to bring rubble for filling in foundations for River driveways.”

The editors of the Baltimore Jewish Times likewise cited the Bristol precedent. They pointed out that the Roosevelt administration’s claim that shipping “is not available” was disproven by the fact that U.S. ships were “going out of their way to find ballast on return trips” from England. Not only that, but the Allies recently had used supposedly “unavailable” ships to bring many thousands of Polish (non-Jewish) refugees to Mexico, the editors noted.

Similar calls were made in the years to follow. When the Germans began the mass deportation of Hungary’s Jews to Auschwitz in 1944, Freda Kirchwey, editor of the political affairs journal The Nation, urged President Roosevelt to “immediately establish ports of asylum [for Jewish refugees]….Troopships which have delivered their loads at Mediterranean ports could be diverted for a single errand of mercy.”

Ultimately, the real obstacle to rescue was not a lack of ships. It was President Franklin D. Roosevelt’s opposition to bringing any significant number of European Jewish refugees to the United States. Late in the war, public and congressional pressure convinced the president to make one small election-year gesture on the issue: he authorized the temporary admission of one group of 982 refugees. There was no difficulty finding a ship for them.

The final irony of this story has to do with the construction of the East River Drive, which was completed with the help of the rubble from Bristol—the rubble that was chosen to serve as ballast instead of Jewish refugees. Today known as the FDR Drive, it was renamed to honor a president who is deservedly revered for his many achievements but whose legacy is tarnished by his tragic abandonment of the Jews.

Dr. Medoff is the founding director of The David S. Wyman Institute for Holocaust Studies and the author of more than 20 books about Jewish history and the Holocaust. His most recent book, America and the Holocaust: A Documentary History, was published by the Jewish Publication Society of America. And available on Amazon (as are his other books).