I thoroughly enjoyed the Donald Trump/ Rosie O’ Donnell feud. After all it was just two rich people acting like idiots. But since that battle calmed down. The sanity- challenged Co-host of The View has really began to show her true nature, she is nothing but a big bully. Now everything is a conspiracy, 9/11, the capture of British Solders— EVERYTHING.

ABC has received tons of protests many of them demanding that the Disney-owned network take Rosie off the air. Rosie has replied that she is exercising her freedom of speech and she is correct. The government can’t censor her. But ABC/Disney can because ultimately ABC is responsible for what goes out over the airways. By allowing Rosie to spew her ridiculous conspiracy claims on their airways they are condoning additional pain an suffering to the victims families. That is the equivalent of shouting fire in a crowded theater. It is time for the company that created Mickey and Minnie to remove the bully from their Airwaves. 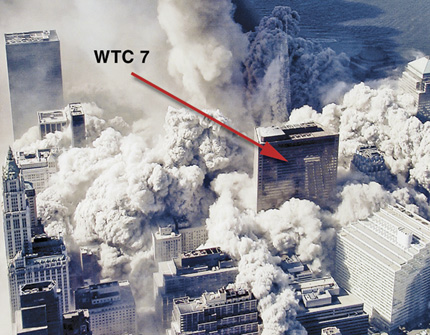 Recently, Rosie O’Donnell, a co-host of ABC talk show The View, made comments on the show that renewed controversy over the collapse of World Trade Center 7. While saying she didn’t know what to believe about the U.S. government’s involvement in the attacks of Sept. 11, she said, “I do believe that it’s the first time in history that fire has ever melted steel. I do believe that it defies physics that World Trade Center tower 7—building 7, which collapsed in on itself—it is impossible for a building to fall the way it fell without explosives being involved. World Trade Center 7. World Trade [Center] 1 and 2 got hit by planes—7, miraculously, the first time in history, steel was melted by fire. It is physically impossible.” She continued: “To say that we don’t know that it imploded, that it was an implosion and a demolition, is beyond ignorant. Look at the films, get a physics expert here [on the show] from Yale, from Harvard, pick the school—[the collapse] defies reason.” (Watch the clip here) For those interested in what physics and demolition experts have said regarding WTC 7’s collapse, as detailed in our book Debunking 9/11 Myths, Popular Mechanics offers these notes: 1. Initial reports from the Federal Emergency Management Agency (FEMA) misunderstood the amount of damage the 47-floor WTC7 sustained from the debris of the falling North Tower—because in early photographs, WTC7 was obscured by smoke and debris. Towers 1 and 7 were approximately 300 ft. apart, and pictures like the ones here and here offer a clear visual of how small that distance is for structures that large. After further studies, the National Institute of Standards and Technology (NIST) told Popular Mechanics that debris from the 110-floor North Tower hit WTC7 with the force of a volcanic eruption. Nearly a quarter of the building was carved away over the bottom 10 stories on its south face, and significant damage was visible up to the 18th floor (see p. 24 of this report, and the screengrab below of an image of WTC7’s damaged south face). 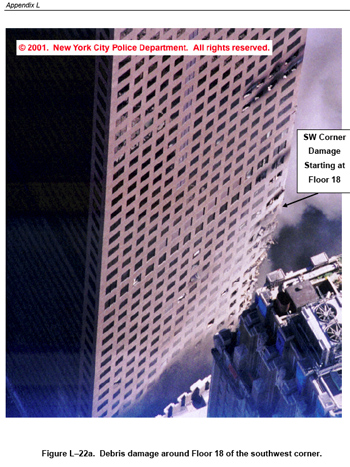 The unusual design of WTC7 is also crucial to the discussion, in that key columns supported extreme loads—as much as 2000 sq. ft. of floor area for each floor—as the building straddled an electrical substation. “What our preliminary analysis has shown is that if you take out just one column on one of the lower floors,” NIST lead investigator Shyam Sunder told Popular Mechanics, “it could cause a vertical progression of collapse so that the entire section comes down.” The tower wasn’t hit by a plane, but it was severely wounded by the collapse of the North Tower. Which is when the fires started. 2. The North and South Towers of the World Trade Center weren’t knocked down by planes—they both stood for more than a half-hour after the impacts. But the crashes destroyed support columns and ignited infernos that ultimately weakened—not melted—the steel structures until the towers could no longer support their own weights (NIST offers a primer here). Ms. O’Donnell fundamentally misstates the case with her use of the word “melted”: Evidence currently points to WTC7 also collapsing because fires weakened its ravaged steel structure. Tower 7 housed the city’s emergency command center, so there were a number of fuel tanks located throughout the building—including two 6000-gal. tanks in the basement that fed some generators in the building by pressurized lines. “Our working hypothesis is that this pressurized line was supplying fuel [to the fire] for a long period of time,” according to Sunder. Steel melts at about 2,750 degrees Fahrenheit—but it loses strength at temperatures as low as 400 F. When temperatures break 1000 degrees F, steel loses nearly 50 percent of its strength. It is unknown what temperatures were reached inside WTC7, but fires in the building raged for seven hours before the collapse. 3. Demolition experts tell Popular Mechanics that wiring a building the size of WTC7 for clandestine demolition would present insurmountable logistical challenges. That issue aside, there’s a clear-cut engineering explanation for why the building fell the way it did. Trusses on the fifth and seventh floors of the building were designed to transfer loads from one set of columns to another; with the south face heavily damaged, the other columns were likely overtaxed. In engineering terms, the “progressive collapse” began on the eastern side, when weakened columns failed from the damage and fire. The entire building fell in on itself as the slumping east side dragged down the west side in a diagonal pattern. Still, damage to the Verizon Building (see p. 21 of this report), directly west of WTC7, and to Fiterman Hall (see here) directly north, show that it was hardly an orderly collapse. NIST is currently preparing its final report on the collapse of WTC7, which is expected to be released this spring. In order to address concerns of conspiracy theorists, the organization added “Hypothetical Blast Analysis” to its research, according to a December 2006 progress report. The report also points out that “NIST has found no evidence of a blast or controlled demolition.”