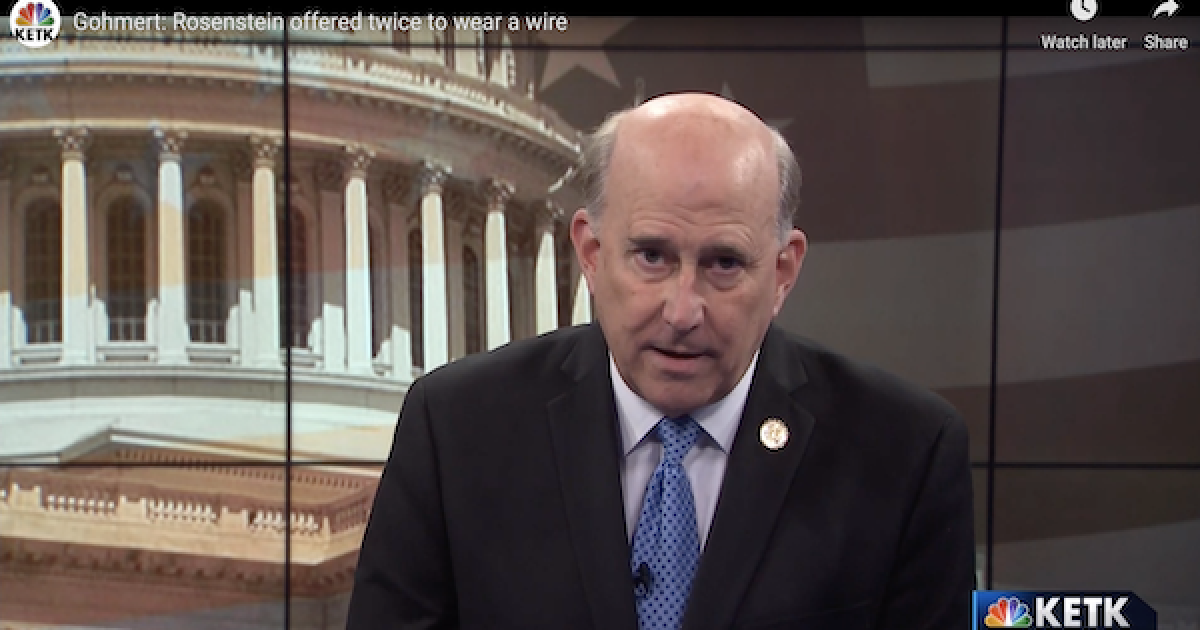 Deputy Attorney General Rod Rosenstein says he was being sarcastic when he said he would wear a wire to prove that President Trump deserved to be removed from office. But if he was joking why did he offer to wear a wire a second time?

That was the bombshell, Congressman Louie Gohmert (R-TX) revealed during a TV interview with KETK-TV (see video below)

They discussed Trump’s declaration of a national emergency over immigration Friday, the bill to fund the government passed Thursday and signed by the president Friday, and the uproar over the new book released by former Acting Director of the FBI Andrew McCabe.

This book was the source of a bombshell dropped by Gohmert on the KETK set when he said FBI Director Rod Rosenstein “lied” when he said he was only joking about offering to wear a wire to record the president.

I transcribed the “money” part of the Gohmert interview  below, the emphasis is the Congressman’s:

What McCabe knows, and I don’t know if he says it on ’60 Minutes’, but there was a second meeting. Rosenstein was getting beat up because they were saying you guys helped fire Comey our buddy Comey and you’re not serious about taking out Trump. And he said..that’s in the first meeting, and he said, “Yeah, I’ll even wear a wire if you want to”  I’ll help you take him out.’ And to, to ensure that people knew how serious he was, at a separate meeting with McCabe, there was at least one other witness , Rosenstein brought it up again, a second time, and said “look, I was really serious, I will wear a wire to try to take down the President.” And McCabe heard that and he went and immediately briefed his deputies about what Rosenstein had just said a second time that he is still insisting he’ll still wear a wire to take down the President.

When you combine the fact that Rosenstein hated President Trump so much that he twice offered to wear a wire with the fact that it was he who appointed a special prosecutor, it is more proof that this entire Russia investigation is a sham.

Watch the video of the interview below: