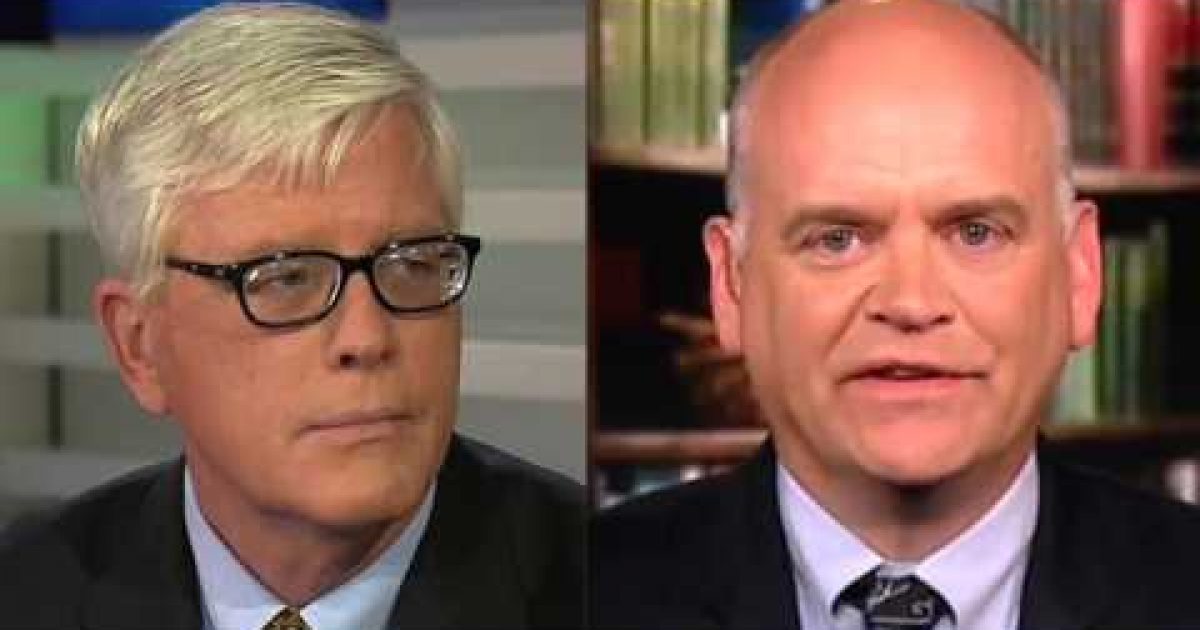 Ron Fournier of the National Journal is one of those rare journalists who play things right down the middle.  Fournier was a guest on the Hugh Hewitt show Tuesday evening and laid into Hillary Clinton first pointing out that she ignored national security with the private server issue and then hitting her for throwing the state department under the bus for he emails.

Below are the transcript and audio for each of the segments;

Hewitt: Ron Fournier, this is what former Deputy Director of the CIA, Mike Morell, told me on Friday, his very impressive book, by the way, The Great War Of Our Time, very impressive, he’s a distinguished servant of 33 years in the intelligence community, and here’s an exchange I had with him.

Hewitt: What did you make of the Secretary of State having a private server in her house?

Morell: So I don’t think that was a very good judgment. I don’t know who gave her that advice, but it was not good advice, and you know, she’s paying a price for it now. Yeah, it was not good.

Hewitt: As a professional matter, do you believe that at least one or perhaps many foreign intelligence services have everything that went to and from that server?

Morell: So I think that foreign intelligence services, the good ones, the good ones, have everything on any unclassified network that the government uses, whether it’s a private server or a public one. They’re that good.

Hewitt: So that’s a yes?

Hewitt: Ron Fournier, what do you make of that?

Fournier: Yeah, I was glad that you got him to say that, because as a non-intelligence official who hasn’t served in the military or in the CIA, and barely got out of a commuter college, I wrote in February that the Chinese and likely other governments had to have these emails. And he just confirmed it.

Fournier: She certainly acted with reckless disregard for basic security measures and for their value and transparency and accountability in government. Whether it’s national security, again, I don’t know what was in those emails and whether she actually compromised national security, although you’re fair enough in saying that if she was dealing with it all, anything that was national security, you had to assume she was, she was Secretary of State, that she was putting that at risk.

Hewitt: Here is what she…

Fournier: Yeah, I think you can say that, sure.

Hewitt: Yes, I mean, I don’t know how anyone can come to the conclusion after what Morell said, and it confirmed for me, I spent one year with sensitive compartmented information at the DOJ chasing spies, and a year at the White House with access to everything. But I just can’t even begin to fathom why people aren’t honing in on this.

They went on to discuss Hillary’s comments about the State Dept. releasing the 55K emails she turned over the Dept. (which doesn’t represent all of her emails).

Hewitt: Ron Fournier, do you hear that do you regret ‘do you regret erasing the emails?’ Have you heard anything like this in a long time?

Fournier: Yeah, I mean, this is the old playbook, the old Clinton playbook. This is the old, like you say, the Nixon playbook. It’s, you know, the Bush playbook. It’s from a different era. It’s from the 20th Century when you only had to schmooze or bully or outlast a handful of reporters, and the page would be turned. And what they don’t realize is that we have this funny, little thing called the internet, and now we have 300 million reporters, not just a couple dozen. And you know, you can’t just talk your way out of a problem nowadays. You have to do something. So when she says something as laughable as they’re not my emails, they belong to the State Department, well, she sure treated them like they were her emails when she had a rogue server in her basement that went around the White House, violated the White House regulations on email. And when she says nobody wants the emails out more than me, well, then give them to us, ma’am. You have copies of them. It’s not like the State Department has the only copies.