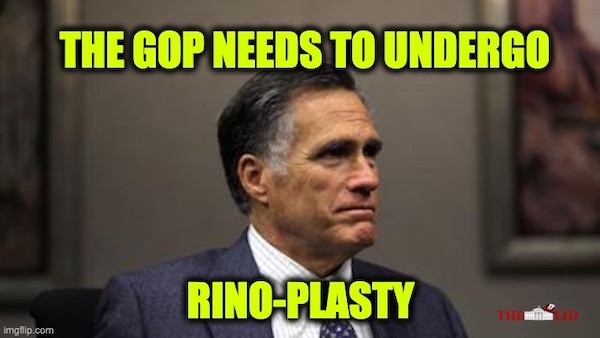 True, she’s a Democrat, and he is Republican, but this is one of the rare cases where the people in the GOP support the Democrat because the Republican is justifiably hated in his own party.

A former member of Congress is telling Sen. Mitt Romney, R-Utah, to either provide evidence of his claims of her “treasonous” actions or apologize and do the right thing: resign from Congress.

The dispute is over her concerns about Biolabs in Ukraine, labs that the United States may have had a part in the funding.

After losing Republican presidential nominee and sitting Utah Senator Mitt Romney blasted her as a “treasonous liar,” former Representative Tulsi Gabbard came roaring back demanding that he prove his accusations or apologize and resign.

Gabbard, who served as a Democrat Representative from the deep blue state of Hawaii, has made a name for herself as one of the true moderate Democrats in American politics. She is no stark conservative, but she also refuses to fall prey to the wild, left-wing swings that most other Democrat politicians indulge in daily. And recently, she became a target of Mitt Romney for her comments about Biolabs in Ukraine.

Last week, Gabbard had posted a social media video in which she expressed her alarm over the large number of Biolabs “conducting research on dangerous pathogens” being operated — with U.S. funding — in Ukraine. And she called for them to be shut down, saying, “So, in order to protect the American people – the people of Europe, the people around the world – these labs need to be shut down immediately. And the pathogens that they hold need to be destroyed.”

There are 25+ US-funded biolabs in Ukraine which if breached would release & spread deadly pathogens to US/world. We must take action now to prevent disaster. US/Russia/Ukraine/NATO/UN/EU must implement a ceasefire now around these labs until they’re secured & pathogens destroyed pic.twitter.com/dhDTH5smIG

Gabbard worried that these pathogens could be “inadvertently or purposely breached or compromised,” causing them to spread throughout Europe and the rest of the world.

But Mitt Romney was aghast by Gabbard’s video. He blasted Gabbard for it calling her claims dangerous and even “treasonous.” The 2012 GOP loser jumped to his Twitter account and said, “Tulsi Gabbard is parroting false Russian propaganda. Her treasonous lies may well cost lives.”

Gabbard was not content to sit by and let Mittens call her a tool for Putin. The former representative struck back by posting a long thread to Twitter on Monday blasting Romney for offering no proof to counter the assertions in her original video.

“Mitt Romney, you have called me a ‘treasonous liar’ for stating that ‘there are 25+ US-funded Biolabs in Ukraine which if breached would release & spread deadly pathogens to U.S./world’ and if breached therefore must be secured to prevent new pandemics,” tweeted Gabbard.

“Bizarrely, you claim that securing these labs (or even calling for securing these labs) is treasonous and will lead to a loss of life when the exact opposite is obviously true. The spread of pathogens is what will cause the loss of life, not the prevention of such spread,” the former Democrat contender for the 2020 Democrat nomination for president continued.

“Senator Romney, please prove that what I said is untrue and treasonous. If you cannot, you should do the honorable thing: apologize and resign from the Senate,” she said, adding, “Evidence of the existence of such Biolabs, their vulnerability, and thus the need to take immediate action to secure them is beyond dispute.”

She offered the following proof:

Gabbard closed, saying, “So, Senator Romney, you have a choice: out of pride, continue to deny the truth or admit you are wrong, apologize, and resign. Aloha. And remember that without the truth, we can be neither safe nor free.”

In any case, it appears beyond doubt that there are numerous Biolabs in Ukraine, of course. It is also beyond doubt that some of them have received U.S. tax dollars. Indeed, the U.S. Defense Department recently admitted that the U.S. has sunk at least $200 million into Ukraine labs.

According to a DOD transcript, a “senior defense official” said the following:

Despite this admission from the Pentagon, it is not clear if some or any of the Biolabs in Ukraine are conducting biowarfare research.

It is also hard to ascertain whether hazardous pathogens are being stored in these labs. And that is what Tulsi Gabbard wants to know. The question is, why doesn’t Mitt Romney?