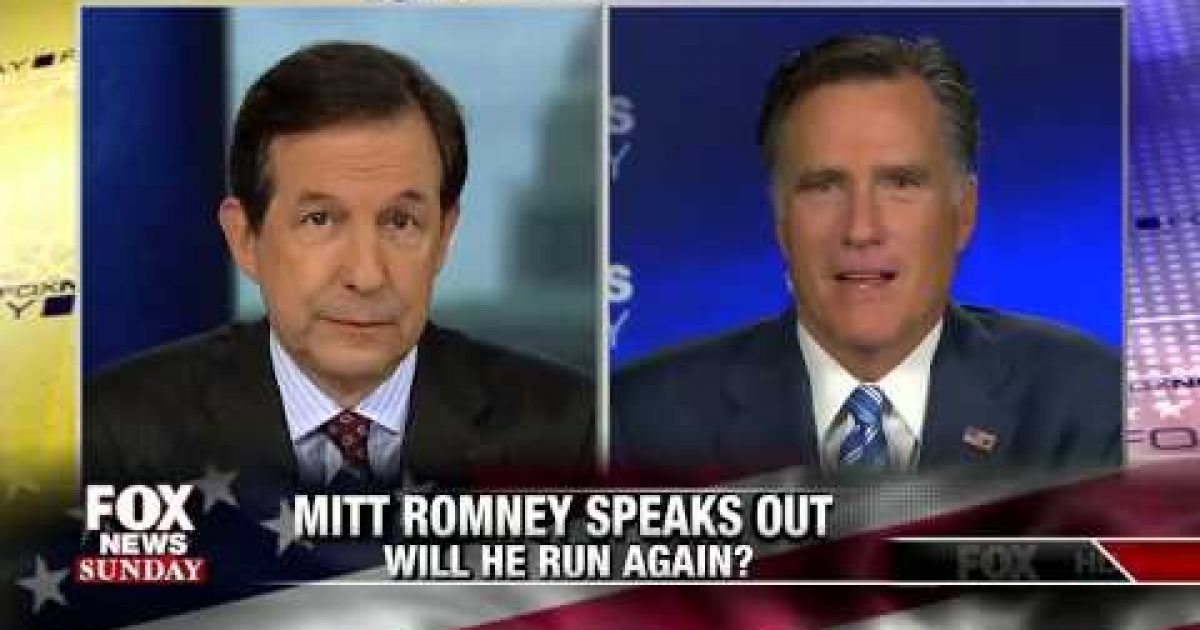 Two weeks ago Mitt Romney appeared on the Hugh Hewitt program and shut the door to running in 2016 every commentator except for one (me) announced that Romney had left the door open to running. Today on Fox News Sunday Chris Wallace quoted his answer to Hugh Hewitt (without crediting Hewitt) and directly asked him if he was willing to make a “Shermanesque comment — commitment, absolutely will not run; if nominated, will not serve? Or are there circumstances under which you would consider running again?” Romney danced around the answer “I spoken on this topic so many times. I don’t really have anything new to add, Chris. I’m not running. I’m not planning on running.”

The operative word is planning.  I believe that Mitt Romney doesn’t want to want to run and has no plan to run. But somewhere deep in his heart he hopes that the party comes to him and asks him to run. Just like he said when he was talking to Hugh Hewitt, “Well, you know, let’s say all the guys that were running all came together and said, ‘Hey, we’ve decided we can’t do it, you must do it.” That’s the one of the million we’re thinking about.”

Wallace: Governor, let me — let me look to the future because voters seem willing to give you another chance. There was a “USA Today” poll just a couple weeks ago of Iowa voters in which you swamped the field there. You had 35 percent. Huckabee was second with 9 percent, and the rest of the field trailed after that. And recently, you gave an interview, and when asked about running again, you gave a whole lot of reasons why not, but then you also said circumstances can change. Question, what does that mean?

Romney: Well, you know, I spoken on this topic so many times. I don’t really have anything new to add, Chris. I’m not running. I’m not planning on running.

I’m going to be supporting our nominee — hopefully, a strong individual that’s able to take our message to the American people and get this country back on track for the people who need help and there are a lot of people who do.

Wallace: But are you making a Shermanesque comment — commitment, absolutely will not run; if nominated, will not serve? Or are there circumstances under which you would consider running again?

Romney: Chris, I’m not going to add to the story. I’ve got nothing new for you. I’ve spoken at this time and time again. I’m not running. I’m not planning on running. I’m going to be helping the person who takes the banner for us.

Wallace: Let me ask you about this a different way. In your heart, do you still think that you would make the best president of all the people out there?

Romney: Look, there’s no question in my mind that I think I’d have been a better president than President Obama has been. No question in my mind about that. And there are other good people who I’m sure will be able to lead the country in the future. I wish it were me. Let me tell you, it was a great experience running for president. I loved that. But my time has come. I had — come and gone. I had that opportunity. I ran, I didn’t win. And now, it’s time for someone else to pick up the baton.