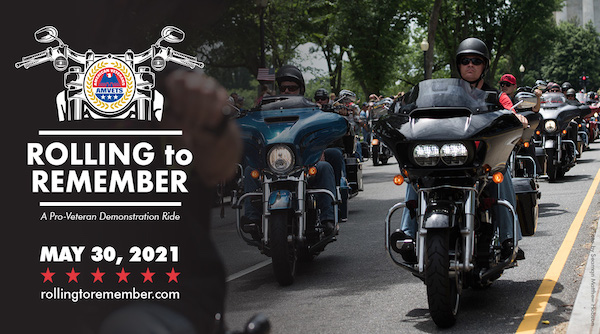 Now that Joe Biden is in charge, the Pentagon has suddenly rejected the permit for the annual “Rolling to Remember” motorcycle ride A POW/MIA veterans group has been holding their motorcycle rally for 33 years, but before 2019, the event was called Rolling Thunder. The Pentagon’s parking lots are usually used as a staging ground for the Rally, which usually runs through the National Mall.

Since 2020, the event is organized by the veteran’s group AMVETS. The permit requests were submitted at the proper time and:

The Defense Department is the only agency holding up this traditional Memorial Day event.  It has already been approved by other local and federal agencies, including the National Park Service, Department of Transportation, DC Police, DC Fire, and Emergency Services Dept. Arlington County PD, Arlington County Fire Department, and the State of Virginia Police,

Despite all those approvals, at the end of April, the Department of Defense gave AMVETS notice that the rejection was final. Per Congressman Brian Mast (R-FL), the reason for the rejection was safety concerns about COVID-19. That, however, goes against the CDC guidance, which says the outdoor transmission risk is very low.  Coronavirus was a pandemic in 2020 when the permit was granted, but America had a pro-Military President.

Mast, who is not only a congressman but an Army veteran who lost both of his legs while serving in Afghanistan, sent a letter to Biden asking him to overrule the Defense Dept.

“I would have hoped that President Biden would have more respect for a Memorial Day tradition, which raises awareness to the 82,000 service members who are still missing in actions and that 22 veterans die by suicide each day,”Rep. Mast said. “That is why today, I am urging President Biden to reverse his administration’s decision and grant Rolling to Remember their permit request to use the Pentagon’s parking lot.”

The Rep. Mast letter to Biden is next.

Letter to White House Re Ro… by Brian Mast