Roger Stone Under Investigation In Connection With Capitol Riot 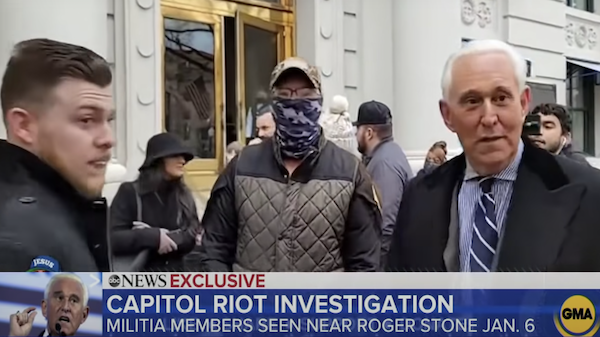 The left is going after Roger Stone again. The supposed agent provocateur is constantly targeted by the left because of his horrible crime of knowing Donald Trump for years, beginning long before running for president. Now they are trying to get Stone for helping to incite the January 6th Capitol riot. Roger Stone under investigation

Stone was pardoned by former President Donald Trump for his obstructing justice conviction in the Russiagate hoax (yes, I know—how does someone obstruct a fraudulent investigation that in itself is an example of injustice?). Now that Trump is out of office, the liberals are still trying to toss Stone into the pokey.

Recently the Biden DOJ hit Stone and his cancer-stricken wife (stage 4 cancer that has spread to her lungs) with a $2 million civil suit. To be fair, the DOJ didn’t know the extent of her illness when they filed the suit.

Now Stone is under investigation because of a suspicion he was involved in inciting the horrible capitol hill riot. Their suspicion stems from the fact he was seen in a video on the morning of January 6th talking to Trump supporters.

The “suspicions” video that follows was first released by ABC News in February:

“So, hopefully, we have this today, right?” one supporter asks Stone in the video, “We shall see,” Stone replies. While ABC is inferring he was talking about the riot, he was more likely talking about the Congressional count of electors to happen later that day. The question referred to the members who said they would oppose the counts of their specific states.  The idiots who rioted at the capitol destroyed the very slim chance to overturn the electoral votes of key states.

The ABC reporter called the riot a deadly riot–true. But the only person killed was Ashli Babbit, an Air Force veteran and Trump supporter who was shot by capitol police without any audible warning. The details of her shooting and the officer who shot her are being kept under wraps by law enforcement. This raises suspicion regarding whether or not it was a “good shoot.”

The people acting as bodyguards for Stone in the video are members of the “Oath Keepers,” a far-right group that agreed with Stone that the election was stolen.  Many of the Oath Keepers have been arrested for participating in the Jan. 6th riot. Stone had received threats before the riot and accepted the help without knowing what group they were associated with.  If standing next to Oath Keepers a few hours before they rioted makes one culpable, doesn’t that mean Barack Obama’s two-plus decades of sitting in Jeremiah Wright’s church makes him an America hater?

Apparently, thanks to the four-month-old video, Stone is under investigation.

The day before the January 6th riot, Stone made a speech to Trump supporters that said in part:

“And we dare not fail or we will step out into one thousand years of darkness.”

Then he referred to the demonstration scheduled for the next day

“Tomorrow when the left tries to bait you, let’s be very clear: we renounce violence.”

Gee, that doesn’t sound like the words of someone inciting a riot. Unless, of course, one is a liberal trying to put anyone associated with Donald Trump into jail.