Robert Muller Testimony: A Sad, Painful, Train-Wreck, And A Loss For The Dems 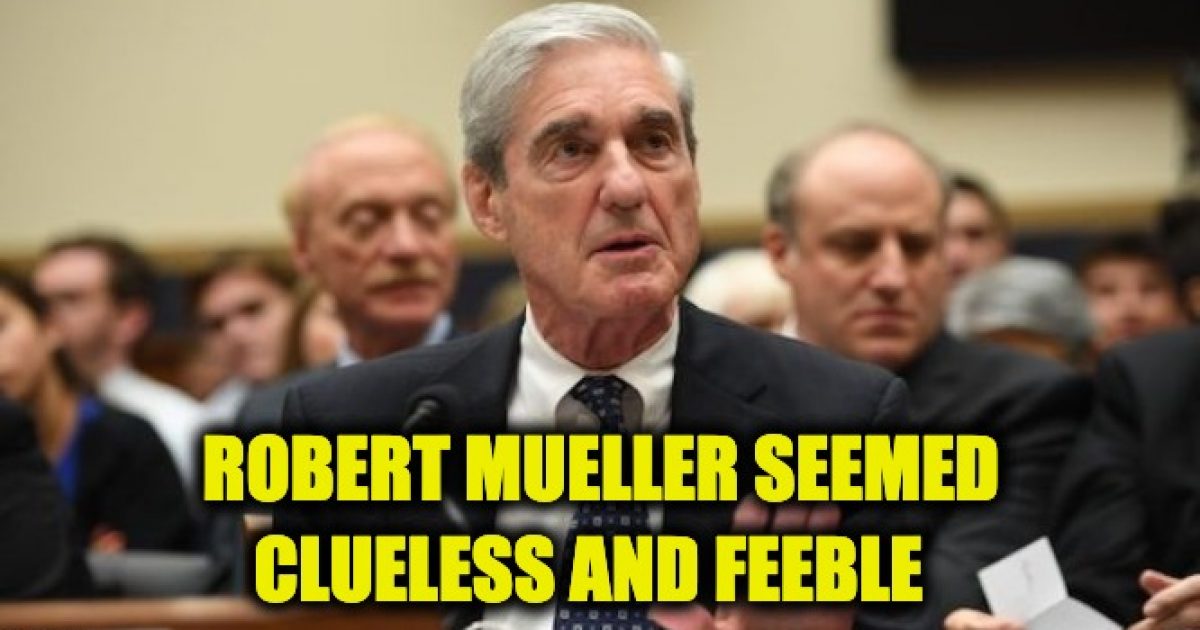 It was a long day of Robert Mueller Congressional testimony in front of two different House committees. But the bottom line is today’s hearings didn’t advance the Democrat’s goal of impeaching President Trump who so far is doing an excellent job in the oval office.

During his testimony, I actually felt bad for Robert Mueller. It was reminiscent of Willy Mays’ final year when he could no longer hit or field. During his years as FBI Director, he earned a reputation as a hard-nosed Congressional witness who knew every minute detail of what he was testifying about and kept answers short and snappy. But at times today, he couldn’t remember simple facts and looked like a deer frozen in the headlights.

The former special prosecutor seemed feeble and didn’t have command of the report he presented. It was more than just the question he didn’t answer (per CNN he deferred or declined to answer questions 206 times) it was the questions he couldn’t answer. Mueller said he was unfamiliar with Fusion GPS, the company that hired Steele to write the Dossier. Heck, even people who haven’t followed the Russia investigation are familiar with Fusion GPS dossier.  When asked which president first appointed him to the U.S. Attorney for the District of Massachusetts  Mueller said, George Bush, but it was Ronald Reagan. Perhaps the most embarrassing moment was when he couldn’t remember the word conspiracy.

WHOA, #Mueller couldn't remember who appointed him to be US Atty in Boston.

He said Bush. It was Reagan.

This is very, very painful.

Much as I hate to say it, this morning’s hearing was a disaster. Far from breathing life into his damning report, the tired Robert Mueller sucked the life out of it. The effort to save democracy and the rule of law from this lawless president has been set back, not advanced.

It was a disaster. Another example occurred during the Judicial Committee hearings, the morning.  Rep. Ted Lieu asked the former prosecutor, “The reason that you did not indict the president is because of the OLC opinion that you cannot indict a sitting president, correct?”  Mueller answered yes, a major gaffe which contradicted a critical point in his report.

As he began his afternoon testimony before the Intelligence Committee, he corrected himself.

“I want to add one correction to my testimony this morning. I want to go back to one thing that was said this morning by Mr. Lieu, who said and I quote, ‘You didn’t charge the President because of the OLC opinion. That is not the correct way to say it. As we say in the report and as I said at the opening, we did not reach a determination as to whether the President committed a crime.”

All week the Democrats were explaining the reason for today’s hearings as “you read the book now see the movie.” But as usual, the book was much better than the movie.

Despite all of the Democratic Party pontificating there was nothing said today that advanced their quest to overturn the 2016 election.  Ironically during the Judiciary hearing in the morning, every Democrat ended their five-minute speeches by saying no one is above the law, including the President. Truth is, based on their policy, those same Democrats believe that illegal aliens are above the law.

There were a few GOP Reps who scored points.  Rep John Radcliffe (R-TX) was the first to point to the part of the Mueller report where it says President Trump wasn’t exonerated of obstruction of justice. As described by Ed Morrissey in Hot Air,

The report addresses Trump’s culpability from the perspective of requiring positive exoneration from charges of committing crimes. Ratcliffe wonders where Mueller found that in the job description of any prosecutor.

In the end, Radcliffe accurately said

Rep. John Ratcliffe slams Robert Mueller for writing "about decisions that weren't reached" on obstruction of justice: "I agree with the Chairman … when he said Donald Trump is not above the law, he's not. But he damn sure shouldn't be below the law" https://t.co/jFAp2RJoaI pic.twitter.com/UCs0PUtXrH

Ed has a great analysis of today’s hearings, read the entire post here.

When Radcliffe was done, Chairman Nadler looked angry. I hadn’t seen him that angry since before he had his stomach stapled when he was very heavy and went to McDonald’s. Nadler was so heavy he got stuck in one of the golden arches.

Even Chuck Todd whose reports are generally anti-GOP thought the hearings were bad for the Democrats.

Jim Jordan (R-OH) was another Republican standout. His questioning pointed out that Joseph Mifsud was interviewed by the FBI, and three times he lied to the FBI yet Mueller didn’t charge him with a crime. Mifsud is also the person who told George Papadopoulos that the Russians had dirt on Hillary. Jordan confronted Mueller on the lack of a prosecution:

Another Ohio Republican, Rep. Mike Turner was, in my opinion, the biggest standout.  He ripped into Mueller on the issue of exoneration and used props. As he was confronting Mueller, Turner pulled out the US Legal code, law books, and even a textbook from the law school where Mueller studied.

Mr. Mueller, does the Attorney General have the power or authority to exonerate?” he said as he grabbed various books. “And what I’m putting up here is the United States code. This is where the Attorney General gets his power. And the constitution, and the annotated cases of these, which we’ve searched. We even went to your law school, because I went to Case Western but I thought maybe your law school teaches it differently, and we got the criminal law textbook from your law school.

This line of questioning is a must-watch, the video is at the end of the post

The Democrats will say today was a big win, but that’s just political bull. or as Dan Bongino described it:

After a full day of questioning, the Democrats must be very disappointed. They expected today to be the opening salvo of their impeachment of President Trump but it was less than a big nothing. It may have killed their efforts to overturn the 2016 election.  And sadly, Robert Mueller who didn’t want to testify ended his storied career by looking clueless. The Democrats should be ashamed for ruining the Mueller’s image to serve their unnecessary and failed political theater.