Ouch This is gonna leave a mark 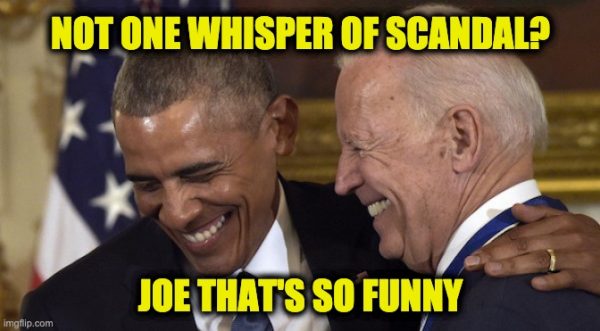 The Republican National Committee (RNC) is out with a devastating new ad contradicting claims by Democrat nominee Joe Biden that the previous administration had been scandal-free.  RNC ad devastates Biden

The schmo of the United States (SCHMOTUS), and presumptive Democratic party nominee, former Vice President Joe Biden, thinks the Obama administration as perfect. Biden has made the easily disproven claim several times, “The thing I’m am proudest of with Barack and me is that there were no scandals.”

Sure, Biden and Obama were like boy scouts. If you believe that you probably also think that Ted Kennedy should have earned a good driver award.

Good ole’ Joe is either trying to BS his way to the Oval Office,  he is suffering from a form of dementia, or he is auditioning for a role in a sit-com when he loses the election.

To prove the Biden clam is ridiculous, the RNC has produced a new ad destroying the scandal-free notion and then some.

It didn’t even include scandals such as helping his son Hunter make money from China and Ukraine or Obamagate.

One need only look at recent news to realize the entire mantra of the Obama-Biden administration is one of operating under a scandal, blurring the lines of legal and illegal actions.

Before Trump took office, the former President and his minions used opposition research funded by a political organization and filled with foreign dirt to surveil members of the Trump campaign.

They unmasked an American citizen in General Michael Flynn, then leaked the information to the media, which is a felony punishable by up to 10 years in prison.

They publicly pushed a Russia collusion narrative to take down the President, despite transcripts showing they knew there was no evidence of any such actions.

Trump very recently tweeted: “He got caught, OBAMAGATE!” and shared a meme that reads, “Hope you had fun investigating me … now it’s my turn.”

Had there been even a semblance of an honest media in this country, the numerous scandals highlighted in the RNC video would have been investigated years ago.

.@PressSec @kayleighmcenany brought visual aids today to assist the White House Press corps in what questions they should be asking Barack Obama about why General Flynn was unmasked.

It was the basis of their entire tenure.

One of the first thoughts to come to mind regarding the scandal-plagued Obama-Biden years is the infamous “Lie of the Year.”

I mean, even PolitiFact gave Obama 'lie of the year' when he blatantly misled the American people about his technocratic health-care plan. That lie upturned millions of lives.

The Benghazi scandal has come to the forefront of late, as the pawn they used to push lies about why Americans were killed at the U.S. Embassy, Susan Rice, has been mentioned as a running mate for Biden.

Then, of course, there was Fast and Furious – a government gun-running operation that resulted in the deaths of dozens of people, including border agent Brian Terry.

Aside from those two scandals, Obama and Biden also traded high-ranking terrorists for a traitor, gave Iran access to the U.S. financial system, used the DOJ to try to shut down reporters by accusing them of committing a crime, meddled in foreign elections, and used the IRS to punish political opponents including pro-Israel groups. If those aren’t enough, here are 1063 examples of the Obama and Biden administration scandals, lies, mendacity, etc.