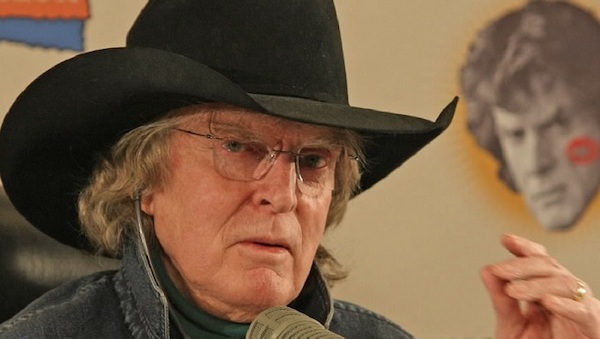 Radio star John Donald Imus died today at age 79.  He died Friday morning at Baylor Scott and White Medical Center in College Station, Texas, after being hospitalized on Christmas Eve, a representative said. The cause of death was not disclosed, but he had been suffering from emphysema for a long time.

Imus in the Morning, which debuted on WNBC-AM in New York in 1971, most recently reached radio listeners via Citadel Media and was simulcast on the Fox Business Network.

Imus was loved or hated for his caustic loudmouth. Outspoken in an age of political correctness, his often coarse satire offended sensibilities. Yet his listeners included those whom he often ridiculed. His call-in guests included President Clinton, Dan Rather, Tim Russert, Bill Bradley, David Dinkins, Rudy Giuliani, and political analyst Jeff Greenfield, who once remarked, “He’s out there talking the way most of us talk when we’re not in public.”

Around thirty-five years ago, when everyone was listening to Howard Stern my soon-to-be wife and I would be driving into our jobs in Manhattan listening to Don Imus. Stern was very jealous of Imus and spent much time displaying his jealousy by trying to disparage the trailblazer.

John Donald Imus Jr., was born on July 23, 1940, in Riverside, California. He was raised in Prescott, Arizona, where his family owned a large ranch. He dropped out of high school to join the U.S. Marines and after basic training won a chair in the band.

Following discharge, he worked at an array of odd jobs: window dresser (he was fired for staging mannequin striptease shows), uranium miner and railroad brakeman, where he suffered a serious neck injury and won a large cash settlement.

While recovering, he set his sites on becoming a disc jockey, ostensibly to play his own music on the airwaves. He moved to Los Angeles, enrolled in a Hollywood broadcasting school and landed his first deejay job at KUTY, a station in Palmdale, California.

During an eight-month stint there, he developed a skill for comic patter and moved to KJOY in Stockton, California, where he staged satirical social and political gags, including an Eldridge Cleaver look-alike contest when the Black Panther was on the lam. His station manager did not see the humor, and he was fired.

My addiction to Imus started in High School forty-five years ago.

He was hilarious with routines such as 1,200 Hamburgers To Go which pissed off the FCC. As a result, they created the rule that Radio hosts must identify themselves when making on-air phone calls.

I loved the banter with political guests, but the best guests Imus’ brother Fred (who named his dog Fred) and Country Music Star Kinky Freidman. Other guests included Dan Rather, Tim Russert, Bill Bradley, David Dinkins, Rudy Giuliani,  political analyst Jeff Greenfield, and Cokie Roberts (depending on whether or not Imus was in the good graces of DC snobs like her).

One incident that upset DC was the 1996 White House correspondent’s dinner. Bill Clinton was president and Don Imus was the comedian. Imus was hilarious—actually he was too funny for DC., at least with his comments about Bubba and Hillary Clinton (see video below).

In 2007 Imus got in trouble again after he made a disparaging comment about members of Rutgers University’s women’s basketball team. He jokingly referred to members of the team as being “nappy-headed hos.” He later met with some of the players and apologized in person. But Al Sharpton insisted that he get fired and he was let go by CBS Radio and  MSNBC which was simulcasting his radio show;

Eventually “Imus in the Morning” was picked up for national radio syndication by Citadel Broadcasting via its WABC flagship. Fox Business Network carried a video simulcast of the show for several years but it ended with his retirement in 2015.

Imus was a spend much of his time and money helping others. He was dedicated to running his Imus Ranch Foundation, a 4,000-acre cattle ranch in Ribera, N.M., that offers training and “cowboy experiences” to children facing cancer, blood disorders and the siblings of infants lost to Sudden Infant Death Syndrome. Imus and his wife Deirdre opened the facility in 1998. The couple’s 21-year-old son, Wyatt Imus, is a champion rodeo star.

I pray that Don Imus, who made me laugh so many times, rests in peace. And may God comfort his beloved wife Deirdre and his sons Wyatt and Lt. Zachary Don Cates; his daughters Nadine, Ashley, Elizabeth, and Toni, as well as all of his other loved ones.