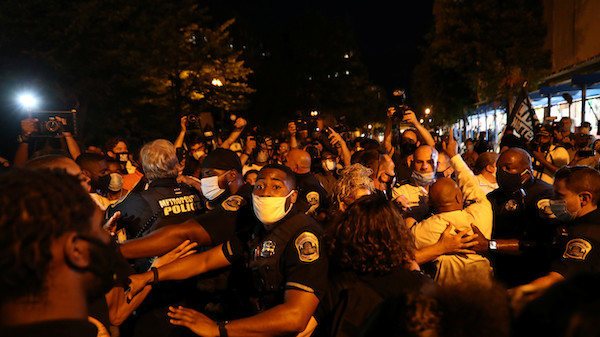 On the final night of the Republican Convention, while President Trump was presenting his acceptance speech from the south lawn of the White House, violent protesters were outside the gates proving his points about the need for law and order.

There is violence and danger in the streets of many Democrat-run cities throughout America. This problem could easily be fixed if they wanted to. We must always have law and order.

Earlier that day for the first time Joe Biden spoke about the violence in the cities (what the mainstream media calls ‘peaceful protests”). As is his usual tactic, Biden blamed it on the President. Senator Rand Paul, who was threatened by the rioters on his way home from the president’s address suggested that his tormentors were from out D.C. and paid to be there.

“I believe there are going to be people who are involved with the attack on us that actually were paid to come here, are not from Washington, D.C., and are sort of paid to be anarchists,” he said. “This is disturbing because really, if you’re inciting a riot that’s a crime, but if you’re paying someone to incite a riot that person needs to go to jail as well.”

Rand Paul just got chased by a crowd back to his hotel, after leaving the White House from Trump’s Republican Party Nomination #DC #DCProtests pic.twitter.com/h1kPcZG1jh

When Trump offers to send federal help to quell the riots, the Democrat Mayors, Governors, and members of Congress reject that help as ‘fascistic’ or ‘authoritarian.’ They call our law enforcement officers,  ‘thugs’  ‘Gestapo,’ or worse.

As the cities spin into chaos. The body count associated with this violence is rising, But because Trump is NOT the authoritarian he’s often accused of being, he has respected the authority of local officials. Even in the nation’s capital, Washington D.C. run by Democratic Party Mayor Muriel Bowser. The ownership of the unresolved violence falls to those who made the decision to reject Federal help and tie the hands of their police.

But the fact that it is in the hands of the local authorities doesn’t stop Biden from ad hominem attacks like this:

When Donald Trump says tonight you won’t be safe in Joe Biden’s America, look around and ask yourself: How safe do you feel in Donald Trump’s America?

So, while Trump and his supporters were celebrating America, what was happening outside the gates? And what was the local Mayor doing to keep the peace?

The rioters called that the Democrats can’t bring themselves to denounce were up to their old tricks.

This is all political intimidation, don’t be afraid of these basement dwellers

“This system is coming down”

The BLM mob in DC rushes police officers as they try to arrest a violent rioter. pic.twitter.com/hGfZclCGD3

These are the people that Democrats absolutely refuse to denounce by name. The closest they will ever come is some tepid ‘violence is bad’.

And why won’t they? Because they don’t want to upset the far-left Bernie wing of the party.