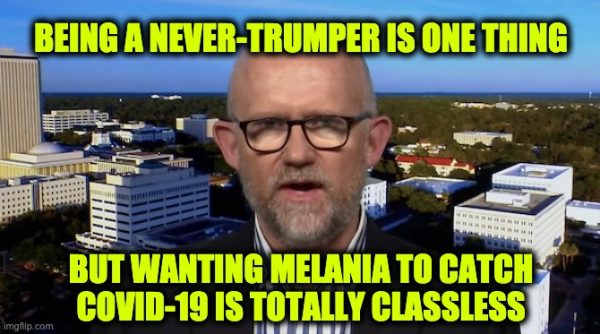 Rick Wilson used to be a big deal in the GOP. He was a Republican political strategist and media consultant with over 20 years of experience in national and statewide candidate campaigns, ballot measures, independent expenditure efforts, corporate and government public affairs, brand management, and crisis communications. That was until Donald Trump was nominated for President in 2016.

Rick not only became a never Trumper but a classless one. If you follow him on Twitter, you will see his snappy answers to sometimes stupid questions. But yesterday, he attacked Melania Trump for agreeing to make a PSA reminding people how to take care of themselves during the CoronaVirus crisis. CNN tweeted the story, and Rick replied that she should #beinfected, which not only implied the first lady should become ill but mocked her anti-bullying #BeBest campaign.

When Rick was on my radio show back in April 2016, I really liked the guy he was a staunch conservative with a great sense of humor, I never imagined how classless he could be.

If he wants to be a never Trumper and constantly trash the President, I disagree, but that’s his prerogative as an American. The part I don’t get is why the hell is he going after Melania? She is not a politician, and all she has done since her husband became President is to hang out with other first ladies, visit sick kids, and dream up programs that helped children.

Wilson got pushback from some blue check types on Twitter:

This is the most insidious & hateful rhetoric of anyone who exists in political punditry. Rick Wilson is wishing Coronavirus on Melania Trump. It doesn’t matter if the wish is aimed at a First Lady, or a doctor, a teacher, a policewoman. It is despicable. He deserves no platform. https://t.co/uTr5RVZSTX

Delete this, Americans are dying.

You’re a really a disgusting person Rick. I know a lot of people have said it but it’s true. You should really start going by the name Dick, it suits you more than the name Rick does… You’ll never let go of your bitterness that Trump won. It’s truly pitiful.

What is wrong with you?https://t.co/hygQzseUta

Honestly, I don’t understand it. This is America, and he is just as free to trash Melania as he is to trash the President.  But wishing that Melania Trump catches the China CoronaVirus is an indication that he is more than a never Trumper. He is a bully who lacks the class I thought he had after our April 2016 interview.