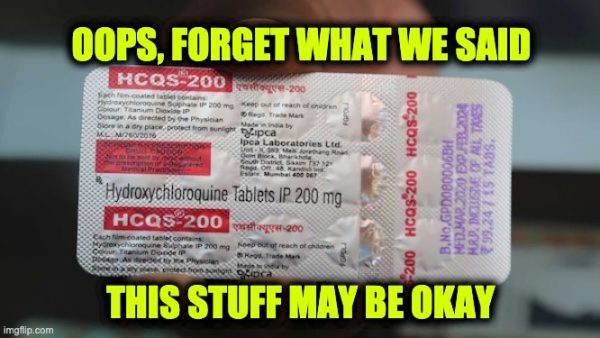 Retract hydroxychloroquine studies.
As we reported on Wednesday, bogus data was used to create the studies claiming that patients who’d been treated with hydroxychloroquine and incorrectly reported users had a higher mortality rate and more heart issues. On Thursday, the other shoe dropped. The authors of the studies, one published in The Lancet and another in The New England Journal of Medicine, requested them to be retracted because Surgisphere, the company that compiled the data, refused to allow independent auditors to verify the data.

According to The Scientist, one of the issues that raised concerns about the data were doubts that “Surgisphere Corporation could have collected so much detailed patient data in such a short time.”

Per the retraction letter posted on the Lancet website:

After publication of our Lancet Article,1 several concerns were raised with respect to the veracity of the data and analyses conducted by Surgisphere Corporation and its founder and our co-author, Sapan Desai [Founder and CEO of Surgisphere] in our publication. We launched an independent thirdparty peer review of Surgisphere with the consent of Sapan Desai to evaluate the origination of the database elements, to confirm the completeness of the database, and to replicate the analyses presented in the paper.

Our independent peer reviewers informed us that Surgisphere would not transfer the full dataset, client contracts, and the full ISO audit report to their servers for analysis as such transfer would violate client agreements and confidentiality requirements. As such, our reviewers were not able to conduct an independent and private peer review and therefore notified us of their withdrawal from the peer-review process

We always aspire to perform our research in accordance with the highest ethical and professional guidelines. We can never forget the responsibility we have as researchers to scrupulously ensure that we rely on data sources that adhere to our high standards. Based on this development, we can no longer vouch for the veracity of the primary data sources. Due to this unfortunate development, the authors request that the paper be retracted.

We all entered this collaboration to contribute in good faith and at a time of great need during the COVID-19 pandemic. We deeply apologise to you, the editors, and the journal readership for any embarrassment or inconvenience that this may have caused.

Per the British newspaper, the Guardian, which outed the questions about the Surgisphere data, the studies led to changes in Covid-19 treatment policies in Latin American countries. They were also behind a decision by the WHO and research institutes around the world to halt trials of the controversial drug hydroxychloroquine.

Surgisphere, which compiled the suspect data for the studies, is reported to have only three employees. According to the Guardian, they had little or no scientific or data gathering experience.  But they are an eclectic group that includes a science fiction writer and an adult-content model. The adult-content model is its sales director. I would love to see her sales pitch.

The negative study also led to an MSM freak out and was the subject of two of Chuck Schumer’s daily Trump trashing. First demanding to know why the VA was using it to treat Veterans with China Virus, and then when President Trump announced he was taking hydroxychloroquine, Schumer accused the President of being “reckless, reckless, reckless.” Don’t expect Schumer to apologize. That would be a sign of the coming of the apocalypse.