"Aisha" got out less than 24 hours before the suicide bombings. 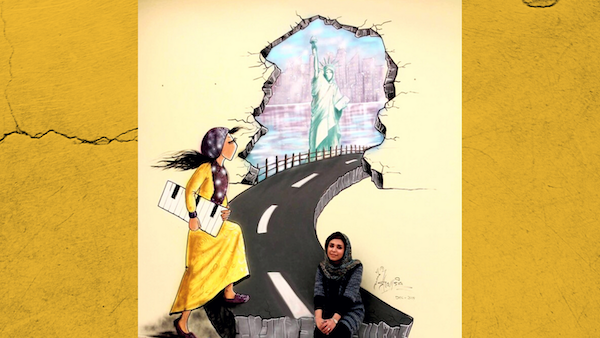 What feminists in the West easily take for granted—Afghan feminists have to die for. If they don’t want to wear a burqa, marry their first cousin, be battered for the rest of their lives; if they want a higher education, do not want to marry, are determined to help other women—they are endangered, targeted, tortured, and executed. Their own families might honor kill them. Now, they may be forced into sex slavery by the Taliban in order to breed a new generation of warriors.  rescues thirty Afghan feminists

These Afghan feminists are heroic, fearless, and are fighting for universal feminist values. Some are still in hiding in Afghanistan, others are at the airport in Kabul, some are in the air. The lucky ones are in overcrowded temporary camps in the Middle East or dispersed throughout Europe. They rely on us because they have no one else left.

Will you help us save them?

I wrote about one such woman on these pages. In the midst of all the horror, “my” Woman in Kabul, “Aisha,” got out less than 24 hours before the suicide bombings. Escorted by her father, a former Afghan military man, accompanied by two younger siblings, and armed with specific instructions from a crucial member of our team, Aisha made her way through the heaving, surging, desperate crowds, past every single heart-stopping Taliban checkpoint, endured beating and cursing, and presented herself at a gate that belonged to a particular European country. They then had to wait for at least a day outside the airport. Tragically, en route, her mother became ill and was forced to turn back.

“Aisha” then spent two more days, sitting on the ground within the airport, followed by many hours in a military plane on the tarmac waiting to take off for the Middle East and then to Europe.

“We urgently need to raise funding for these women, for their food, plane tickets, cell phone access, changes of clothing, etc.”

How did “Aisha” even get the last-minute paperwork? How did she know what gate to approach? How did she and about thirty other Afghan feminists (and counting) finally escape from Hell?

I am thrilled to share that answer. My team consists of radical feminists, anti-trafficking/anti-sex slavery activists and experts, honor killing experts, (myself included), a brilliant legal team—Europeans and Americans, mainly white girls, (who’ve lately been overly maligned): some Jews, some Christians, a Sikh, maybe some atheists—perhaps a Goddess worshiper or two. Who knows? It is my honor and my privilege to be among them.

Oddly, predictably, I got no help—not even a response—from any of the Muslim feminists whom I contacted. Maybe they were already on the front lines somewhere else. To her credit, one American feminist politician did respond and immediately sent me on to another, a “global ambassador” for women and girls from whom I never heard. Another former director of an American-based American-Afghan women’s organization called and sent me some very complicated bureaucratic guidelines for a special visa which may take months, if not years to obtain, and whose guidelines I absolutely failed to understand. She certainly meant well. Through others, I got the name of a smuggler who was ready to sell fake visas—and passed the information along.

Oh, but my band of sisters gathered together swiftly and began the work which has now lasted for five intense around-the-clock weeks and continues on.

I was also in touch with an Israel and American-based humanitarian rescue organization, and with two Americans, both former Marines, whose buddies were hard at work rescuing others. Simply knowing of their existence and being able to pick their brains strengthened me. I nearly got Aisha to India but that opportunity fell through.

I had to approach, non-stop, thirty-six people, one after the other, each of whom led me to someone else. Some promised funding. Others promised lodging. Some gave me invaluable military advice. No one offered to do the heavy lifting. Except for my team of radical feminist Amazon warriors—perhaps women right out of Monique Wittig’s fiction. Only we are all too real.

And then there is my heroic “Aisha,” a feminist with a degree in medical science, a researcher, and a journalist. Our readers already know a bit about her from my previous piece at 4W. She is now safely in a two-room house in a village in a beautiful rural area of a European country, where it is “peaceful and calm.” She (and her mother, with whom I’ve also maintained contact), heap praises upon me and our team. Aisha writes:

“You are all angels. Because of you and your hard working team, I am safe and have my freedom. I have no words to say thank you since it has been a month both day and night that you’ve been trying to get me out of here and give me the freedom to live a different life.”

Aisha’s family plans to remain in Europe; she plans to continue on to the United States where we have obtained a scholarship for her and a paid research assistantship with the professor for whom she worked in Afghanistan. He came forward, wrote letters, applied for all the necessary paperwork, and has also kindly invited Aisha to live with him and his family “for as long as necessary.” (I will name him in a future piece).

Aisha has earned this with her own good work both as an interpreter doing interviews, a data analyst, and an expert in her own right on issues of women’s health. His kindness has earned him a lofty spot in Heaven. When I asked her what she wants to tell other Afghan women, Aisha tells me:

This extraordinary team effort began many years ago when I first met Mandy Sanghera, a British Sikh humanitarian activist, and award-winning philanthropist, with whom I worked on honor killing, child marriage, UN-enabled pederasty, and surrogacy.

Mandy spends a lot of time on social media—a lot of time!—and she began to meet Afghan women pleading for rescue in a chat room. Such pleas continue at this very moment. Mandy has been in touch with at least “146” such desperate Afghan women. She turned some of them over to me—and the rest is feminist history.

At this point, I must acknowledge the crucial role that the internet has played in our ability to remain in touch with each other. More about that elsewhere and perhaps in more capable hands.

But our team also began when I met, interviewed, befriended, and thereafter began publishing in Dr. Donna Hughes’s absolutely superb journal “Dignity: A Journal of Analysis of Exploitation and Violence.”

A while back, Donna had connected me to a super-competent lawyer, Melanie Shapiro, who specializes in asylum and immigration work and for whom I’d submitted several affidavits for women who had escaped being honor killed. Now, Melanie and three members of her ten-member staff spent three days applying for every kind of emergency humanitarian asylum/student visa/special visa for Aisha.

And, as Mandy continued to connect us to more and more Afghan women begging to be rescued, Melanie expanded what she was doing to include them.

Meanwhile, Donna had also connected me to Dr. Ingeborg Kraus, a feminist psychologist in Germany, and to Sandra Norak, a lawyer, and anti-trafficking activist. Both women have a long history of rescuing immigrant women and women trapped in prostitution. Norak herself managed to heroically exit six years of prostitution.

A final member of our team cannot be named. Let me call her Ekaterina. She obtained vital paperwork, helped remotely guide our Afghan women through the streets to the airport, and was perhaps aided by some on-the-ground muscle. Of this, I am not sure.

“If a trauma therapist is too scared to work with people who are victims of human trafficking, Islamic fundamentalists, or psychopaths, it is better to allow others to do this work. Otherwise, the therapist’s fear will be part of the therapy. We need to give people hope and strength. I was in Bosnia during and after the war in 1991-2002. The land was bombed out and refugees were everywhere. People had been abandoned by the international community. By being with them, sharing their sorrow and talking to them, they felt witnessed, seen, and that gave them energy.”

Between Ingeborg, Sandra, Donna, and myself we were able to exclude some men who were only too eager to get their hands on as many Afghan girls as they could—and two such men put our Aisha into potential danger until I put a hard stop to it. They might have been sincere, altruistic, reckless, misguided—but they also could have been control freak misogynists or worse.

One of the other Afghan feminists whom we’ve helped rescue (together with four other activists in her party) wants to be named: Crystal Bayat—the leader who organized the very last public protest against the Taliban and who has given interviews about them. She is a high-value target (as are many of the others). There is always a danger when such women are embedded with other Afghans or with fundamentalist Muslim refugees who view feminists as dangerous and disobedient. Crystal is well-spoken. Here is a little of what she told me yesterday in a phone call.

“I’m a girl who was born in the midst of gunpowder and smoke explosions. I grew up as positive changes were happening. I would now like to fight to preserve these achievements. In the early days of the Taliban’s entrance into Kabul, I saw the death of these dreams. The death of peace, freedom, democracy, and safety for women. But, if we work together, the hope will remain alive and dreams can come true.”

Crystal is safely out of Kabul but she has not yet been able to get to Europe or to the United States. Both she and Mandy feel she is in special danger. Perhaps she is. Perhaps all our feminists are.

We urgently need to raise funding for these women, for their food, plane tickets, cell phone access, changes of clothing, etc. Please donate what you can to the Santander Bank. The account number is 9536340771, the routing number is 231372691. It is crucial that you email Melanie Shapiro, Esq. at melanie@melanieshapiroesq.com so she will know the amount and the name of the donor.

We Jews have an expression. “Saving one life is like saving a world.“ And here we are, a band of sisters, well on our way to having saved more than thirty worlds and counting.