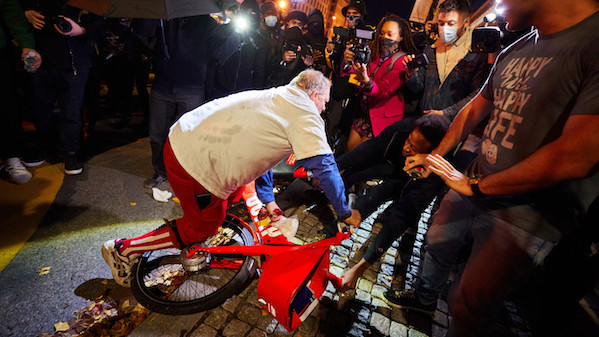 Over the weekend, troubling scenes were being broadcast out of our nation’s capital, as supporters of President Trump gathered to rally around the incumbent Republican. Republicans demanding probe of DC mayor

At the heart of the “Million MAGA March” was the idea that Donald Trump may have had the election “stolen” from him via various methods, as outlined by the President’s legal team and, specifically, Rudy Giuliani.

As Trump supporters descended upon DC, however, they were met with raucous crowds of left-leaning counter-protesters, and the city soon grew violent with political melees.

A older Trump supporter on a bicycle was knocked down and had liquid dumped on him by BLM-antifa rioters in DC. pic.twitter.com/juPwidaO8y

Now, House Republicans are asking for an inquiry as to how and why those clashes were able to occur in one of the most secure cities in our country.

The top Republicans on the House Oversight Committee are demanding Chairwoman Carolyn Maloney to hold a hearing to examine the violence against supporters of President Trump after the “Million MAGA March” in Washington, D.C. last weekend.

They are also calling for answers from D.C. Mayor Muriel Bowser, claiming her “silence” on the issue is part of a “broader pattern of viewpoint discrimination.”

Their language was stern.

“We respectfully request a hearing on the violence directed at supporters of President Trump on November 14, 2020,” they wrote to Maloney. “These supporters were exercising their First Amendment right to peacefully assemble within the District of Columbia.”

“These supporters were exercising their First Amendment right to peacefully assemble within the District of Columbia,” they added. “The failure of the city’s leaders to afford basic protections to persons who may hold different political viewpoints from their own appears to be another concerning example of viewpoint discrimination in the District.”

The Trump supporters were seen on video widely circulated on social media being verbally and physically harassed by counter-protesters in several skirmishes last weekend.