Is Biden Losing It? 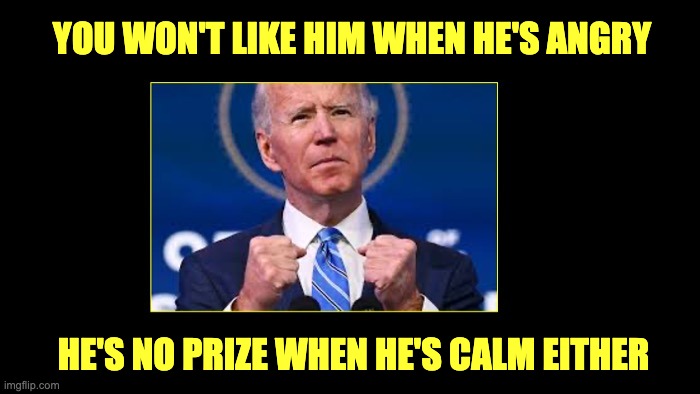 reports of a seething Biden

The White House has a rather obvious PR problem at the moment, with Americans growing ever more annoyed with the inaction of the Biden administration.

You see, Joe Biden wasn’t exactly thrilled to run for the presidency, having to be convinced by the Democratic Party to even enter the race.  They saw the former Vice President as a “return to form” candidate that could gobble up votes from the political center of our nation and from voters who would have voted for Trump but were uncomfortable with his angry rebuttals.

But this reluctance to run has turned into a reluctance to lead, and Biden’s approval ratings have been swirling the drain for some time.

So now, conveniently, there are “reports” coming out of the White House that paint Biden as animated and “seething.”

President Joe Biden is getting more frustrated by his flailing presidency, according to another report in the establishment media.

Politico’s Jonathan Lemire cites five White House officials and Democrats close to the Biden Administration who point to “the greatest source of West Wing frustration, coming from behind the Resolute Desk.”

Biden is exasperated, the report says, that his approval ratings are below former President Donald Trump’s.

The report also notes Biden is “far more prone to salty language behind the scenes than popularly known” and “erupted” over the optics of the baby formula shortages.

The Politico report adds to other recent stories outling Biden’s flailing presidency, including an NBC report detailing a frustrated president reminding his staffers he is the president and a CNN story detailing his messaging struggles online despite a team of over 70 people dedicated to online strategy.

Those closest to Biden, including his wife Jill Biden and his sister Valerie Biden Owens, have urged White House staff to loosen up the restraints on the president and allow him to get back on the road.

The claims are reminiscent of a recent admission by the administration that they were planning to allow Biden to be “angry” after watching his approval ratings dwindle horribly over the course of recent months.

reports of a seething Biden