Rep Omar: Some Protestors ‘Felt Terrorized By The Presence Of The National Guard And The Militarized Police’ 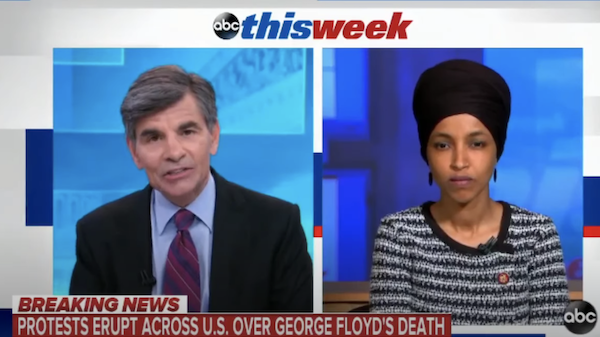 It seems that every time Ilhan Omar (D-MN) opens her mouth, she says something stupid or divisive. Her May 31st appearance on This Week With Bill Clinton’s Press Secretary George Stephanopoulos was no different. The two spoke about the riots incited by the killing of George Floyd by a Minnesota policeman as his partner watched and did nothing. Rep Omar national guard

Stephanopoulos, the Clinton operative, asked the newly wedded Rep Omar, “Did the National Guard get things under control last night?”

Omar’s answer implied that the National Guard, who didn’t show up into the protesters were replaced by rioters, were terrorists.

I think last night, the community did feel phased to know that there will not be a burning of their businesses and their homes. We are obviously worried and feeling terrorized about that prospect, but there really was also many people who chose to demonstrate and not abide by the curfew, who felt like they also were terrorized by the presence of tanks, by the presence of the National Guard and the militarized police.

Who is terrorizing whom? Rep. Omar Perhaps your head-covering is wrapped too tight.  You refused to recognize Islamist terrorists who committed 9/11 saying, “some people did something.” You’ve given speeches to CAIR, which was created by the international terrorist group the Muslim Brotherhood,  heck you even urged terrorists to bomb the Trump hotel. But you DARE to suggest that the National Guard —Americans who faced the violence of the riots, to protect you and the rest of Minneapolis, are terrorists? They showed up in Minneapolis after two nights of riots, they didn’t cause the riots.

And as you said, George, our country is in pain. People can’t get that image of George Floyd having the life choked out of him by a police officer who was supposed to protect and serve our community. But this also is a reminder that we are living in a country that has truly for a long time brutalized African-Americans, from slavery, to lynching, to Jim Crow, to mass incarceration and now to police brutality.

Mass incarceration? She must be happy about the prison reform bill President Trump pushed through… Well, maybe not,

Liberal activist and host George Stephanopoulos asked, “You faced threats inspired by President Trump in the past, what would you like the hear from him now?”

Threats?  I was threatened based on Omar’s anti-Semitism, which the Democrats in Congress refused to address. How did Trump inspire threats? Is he talking about the tweet that Trump sent out challenging The Squad, freshman Democratic members of congress  Ayanna Pressley (M.A.), Alexandria Ocasio-Cortez (N.Y.), Rashida Tlaib (MI), and Ilhan Omar (M.N.) to show they could do better than him? The tweets that the liberal politicians and media claimed was telling them to move back to the countries of origin.

….and viciously telling the people of the United States, the greatest and most powerful Nation on earth, how our government is to be run. Why don’t they go back and help fix the totally broken and crime infested places from which they came. Then come back and show us how….

Trump’s tweet told them to fix the countries of their heritage and then come back and show him how they did it. He wasn’t telling them to move, nor was he inciting violence against them.

This president has failed in really understanding the kind of pain and anguish many of his citizens are feeling. When you have a president who really is glorifying violence and was talking about the kind of vicious dogs and weapons that could be unleashed on citizens, it is quite appalling and disturbing.

When did Trump talk about Dogs and weapons to be unleashed on citizens?

….These THUGS are dishonoring the memory of George Floyd, and I won’t let that happen. Just spoke to Governor Tim Walz and told him that the Military is with him all the way. Any difficulty and we will assume control but, when the looting starts, the shooting starts. Thank you!

When asked what he meant by the looting and shooting, the President explained it was a warning against violence:

….It was spoken as a fact, not as a statement. It’s very simple, nobody should have any problem with this other than the haters, and those looking to cause trouble on social media. Honor the memory of George Floyd!

Either way, Trump did not mention “Dogs and weapons to be unleashed on citizens.” A real reporter would have asked her what she was talking about. But we aren’t talking about a real reporter. We’re talking about George Stephanopoulos, who used to be a senior member of Team Clinton. He wants Omar to be able to skew her story and spread lies.

Below is a video of the liberal activist’s interview of the hate-mongering anti-Semitic Congresswoman from Minnesota. It’s actually the entire show, but Rep. Omar is up first.