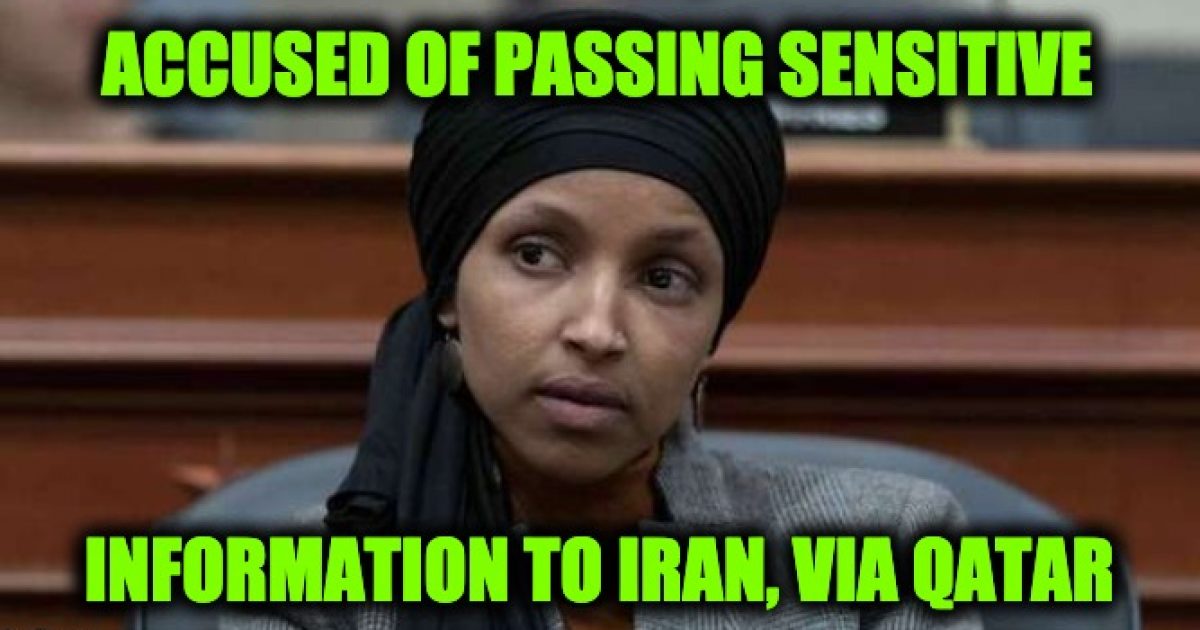 Holy Cow, if this is true it’s really bad for Rep. Omar (D-MN) and for America because this is treason. A sworn court statement claims she passed information to Iran through Qatar. The sworn deposition (embedded below)  for a Florida Court given by Alan Bender a. Kuwaiti-born Canadian businessman claimed that Ilhan Omar was recruited and paid by Qatar and passed sensitive information via intermediaries to Iran. She is a member of the House Foreign Relations committee and most probably had much information desired by the Iranian Mullahs. Understand however this is only one man’s charge, more investigation is necessary to prove it true. Rep. Omar Iran.

Bender was subpoenaed in a lawsuit against the Qatari emir’s brother, Sheikh Khalid bin Hamad al-Thani, who stands accused of ordering his American bodyguard to murder two people and holding his hired American paramedic prisoner. In his deposition, Bender testifies about his meetings with Al-Masnad and other Qatari officials in which they mentioned the Sheikh Khalid case and discusses Qatar’s campaign to influence Western politicians.

The Saudi news outlet Al Arabiya obtained Bender’s deposition and reported that the contents were authenticated by the attorney for the plaintiffs.

During the deposition, businessman Alan Bender said he met with Qatar’s Secretary to the Emir for Security Affairs Mohammad bin Ahmed bin Abdullah al-Masnad and two other senior Qatari officials. According to Bender, these officials said to him, “If it wasn’t for our cash, Ilhan Omar would be just another black Somali refugee in America collecting welfare and serving tables on weekends.”

Bender also testified the Qatari officials asked him to recruit American politicians and journalists to be Qatari assets. After he objected, the officials told him that a number of important people were already on Qatar’s payroll. Ilhan Omar was described as the “jewel in the crown,” he said.

Bender also testified that Al-Masnad said that Qatar “recruited Ilhan Omar from even way before she thought about becoming a government official.… They groomed her and arranged the foundation, the grounds, for her to get into politics way before she even showed interest. They convinced her.”

Bender alleged that Omar cooperated with the Qataris and received cash payments. He also claimed that  once Omar took office, she used her position in the House of Representatives to access sensitive information which she relayed to Qatar, and through them to Iran.

According to Bender’s deposition, Omar’s role in the Qatari influence campaign is crucial. She actively recruited other politicians on behalf of Qatar, he said. Bender said the Qataris claimed that “the best thing money can buy are American officials because they are the cheapest of the cheapest costing officials in the world,” according to his sworn testimony.

On page 77 of the deposition, Bender said he questioned why a devout Muslim such as Omar would take bribes, only to be told, “don’t be fooled by her headscarf. She’s a sex maniac, and she’s very weak when it comes to money and sex. And we got both.”

The Jerusalem Post which posted similar pieces of the transcript added:

Bender’s testimony has been questioned and reports, including this one by the Post, have led to speculation, especially on Twitter. Speaking to the Post, Bender said: “I confirm that the information published in The Jerusalem Post report about Ilhan Omar and Qatar is accurate 100%.”

The deposition shows he further told the court that, during a 2017 meeting with Turkish President Recep Tayyip Erdogan, Omar swore allegiance to him. At the time she was a junior state representative in Minnesota.

There is the possibility that Mr. Bender perjured himself in the deposition, and his account of Rep. Omar’s treachery is not accurate. It is also possible that Qatar manipulated Bender convincing him the account was true when it wasn’t At the very least, Binder’s statement should elicit an investigation either by congress or DHS to determine its validity because this charge is very serious if true.

The full deposition is embedded below.