Rep. Omar Doubles-Down On Some People Did Something: Says She Was Victim 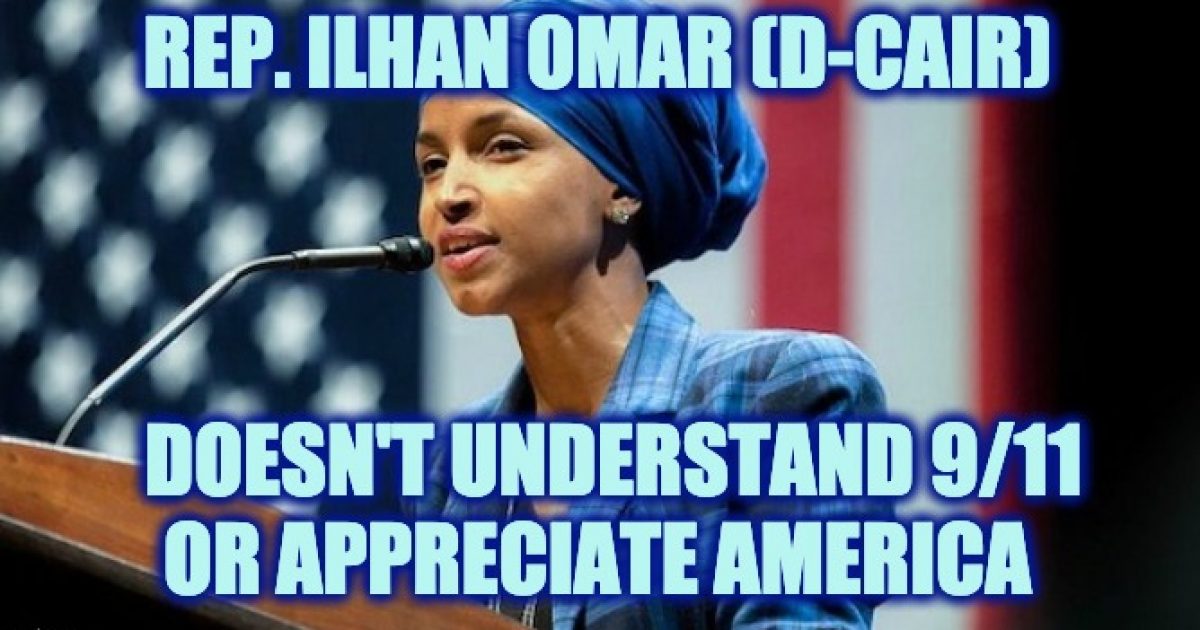 Ilhan Omar (D-MN) was on Face The Nation this week and was asked if she understood why her “Some people did something,” comment was offensive to the victims of 9/11 and their families. Her answer made it obvious that she doesn’t understand (or doesn’t care).

Instead of answering, Omar talked about the “backlash” against Muslims after the 9/11 attack.

Margaret Brennan: This was the anniversary this week, the 18th, of the 9/11 attacks on our country. And at a Ground Zero- well- remembrance ceremony- I’ll call it- the son of one of the victims stood up and specifically called out language you had used in the past that he characterized as not respectful when referring to the three thousand people who were killed by Al-Qaeda. You said, “some people did something,” and he put it right there on his t-shirt. Do- do you understand why people found that offensive?

Rep. Omar: I mean so, 9/11 was an attack on all Americans. It was an attack on all of us. And I certainly could not understand the weight of the pain that the victims of the- the families of 9/11 must feel. But I think it is really important for us to make sure that we are not forgetting, right, the aftermath of what happened after 9/11. Many Americans found themselves now having their civil rights stripped from them. And so what I was speaking to was the fact that as a Muslim, not only was I suffering as an American who was attacked on that day but the next day I woke up as my fellow Americans were now treating me a suspect.

No one had their civil rights stripped from them. In fact, from the very beginning, President Bush was telling America that the anger at the 9/11 terrorists should not be directed at all Muslims, especially the Muslims who are Americans.

Just like the fact that Rep Omar is an anti-Semite does not make me angry at all Muslims.

Later on, she added:

You know, when we were celebrating few nights ago, I talked about how some people would say, “Ilhan, you should speak a certain way. Ilhan, you should do something a certain way,” and I think that’s contradictory, really, to the purpose of- of my existence in this space. I believe that my constituents sent me to make sure that I was bringing in a conversation that others weren’t having, that I was speaking for people who felt voiceless for a long time. And I think it’s really important for us to recognize that it’s a new Congress. It’s a diverse Congress and we’re not only diverse in our race or ethnicity or religion, but we are also diverse in our perspective, in our pain and our struggles, and in the hopes and dreams that we have, and the kind of America that we want to shape for all of us.

She left out what she believes…except for Jews.

At the NY 9/11 ceremony, Nicholas Haros Jr. took the stage wearing a T-shirt emblazoned with “some people did something,” highlighting a past remark from Omar. “Today I am here to respond to you, exactly who did what to whom,” Haros, who lost his mother, Francis Haros, in the attack, said. “We know who and what was done, there’s no uncertainty about that.” Haros also called out the rest of “The Squad,” for their support of Omar’s statement and their lack of patriotism.

Ilhan Omar has shown a lack of patriotism and appreciation of this country which gave her family refuge.

For example in August 2017 said the US was founded by genocide and we only keep power via neocolonialism.

On March 25th of this year, she issued a call to arms for her fellow Muslim Americans to raise hell in America because Muslims are treated as second class citizens in America.

On May 1st she announced her support of Venezuelan Despot Nicolas Maduro and blamed the country’s violence on American bullying.

Rep. Omar doesn’t understand America or freedom and hopefully will be voted out of office on Nov. 2020.