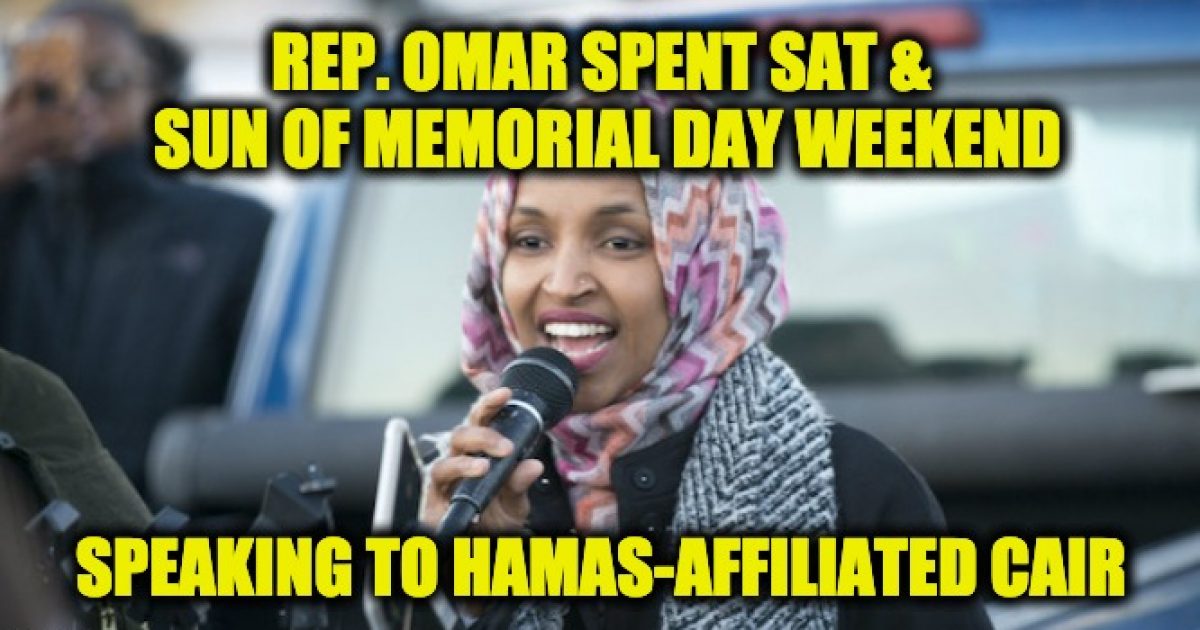 Why is a member of Congress supporting a terrorist-affiliated organization created by the Muslim Brotherhood at events being held during the Memorial Day weekend when America honors its war dead?

Two Washington State CAIR Events lined up Rep Ilhan Omar as their guest speaker. In Bellevue on Saturday, people turned out to protest. She was also set to be the main speaker at a $40 per plate dinner at the SEA-TAC Hilton on Sunday afternoon from 3 to 5 p.m. in which the Press was banned. It’s the second time that CAIR has banned the press from a dinner with Omar.

The Saturday fundraiser for CAIR was called “Un-Apologetically US: Building MUSLIM POWER For 2020 & Beyond.” It was held at the Meydenbauer Center in Bellevue, Washington. It also garnered a plethora of protestors on both sides.

Today, Ilhan Omar is the featured speaker at a Seattle Ramadan fundraiser w/CAIR, an org the United Arab Emirates accuses of being a terrorist entity. The group is also an unindicted co-conspirator in the Holy Land terror funding case. Apparently there is a protest planned. pic.twitter.com/jl5QnWfBN2

The following tweets from Saturday’s events were made by Journalist Andy Ngo, from the Quillette, a Portland-based media. When Omar’s supporters found out that he was not a “pre-approved” media outlet, they tried to block him. Andy Ngo is Asian.

They continually called the Jewish protesters “racists” and “Nazis.” You’d think by now they’d find something else in their vocabulary… but no.

"We've seen this kind of rhetoric before in the 1930s & it led to a lot of horrific things." A woman explains why she is protesting Ilhan Omar's CAIR fundraiser in Bellevue, Wash. pic.twitter.com/y2qXkPde8h

A street preacher went over to the pro-Ilhan Omar side & they began to scream & shove him out. @BvuePD immediately intervened to shut down the escalation. What a difference compared to @PortlandPolice. pic.twitter.com/Ps0WQCxWBs

You can watch my full vid from yesterday’s protest/counter-protest outside Ilhan Omar’s CAIR fundraiser. Unfortunately I was unable to interview anyone from the pro-Omar side. They treated me w/hostility & physically blocked me when I attempted to go near. https://t.co/SZ3IP8FW0z pic.twitter.com/uvTRkKTX7A

Mr. Ngo’s most crucial point was in is the first tweet.  The Council on American-Islamic Relations (CAIR)  was tied to international terrorism and Hamas during the Holy Land Foundation trial eleven years ago.

In 2008 the word GUILTY was read in a Dallas courtroom a total of 108 times as a jury convicted the Holy Land Foundation and each of the associated defendants of raising money to fund Hamas terrorism. Implicated, along with those convicted was supposed Civil Rights organization CAIR, the Council on American-Islamic Relations and scion of the Muslim Brotherhood,  which lobbies the government from its headquarters in Washington DC. Even though CAIR was named an unindicted co-conspirator in the Holy Land case, its leaders invited guests Network News Programs, where they are usually called upon to whitewash some terrorist act, and now marching in a parade to honor our heroes, some of whom fought in the war on terror.

The fact that  Rep Ilhan Omar chose to spend much of Memorial Day weekend with people from CAIR instead of any of the millions of good Muslims in America demonstrates her disregard for those who we remember on this day, some of whom died at the hands of radical Islamist terrorists, as well as the terrorist threat all Americans face.

Some of this post was first seen at Conservative Firing Line