Unlike Democrats, Mike Pence Challenges POTUS on Israel, “Mr. President, whose side are you on?” 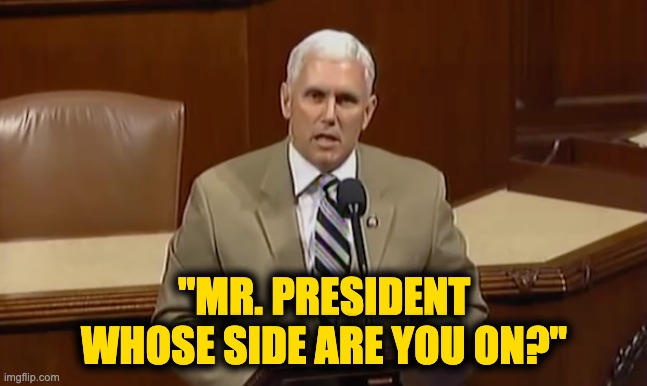 When the chips are down, you really find out who your friends are. Since the President of the United States began his assault on Israel last year, with rare exceptions, the only words of support for the Jewish State have come from the Republican side of the Aisle.

Since the IHH terrorist attack on the IDF Navy as they boarded the guerrilla flotilla almost two weeks ago, the Obama administration has been playing a silly “good cop, bad cop” game with Israel. Joe Biden, the SHMOTUS, supported Israel’s right to defend herself, while Secretary of State Clinton condemned Israel’s actions. The President has done his best to appear neutral while showing concern for the Israeli move to protect herself and then slamming the Gaza embargo created because of Hamas terrorism.

Unlike their Democratic Party colleges, Republicans in Congress have stood up in front of the cameras and criticized the President for his abandonment of loyal ally Israel. Perhaps the most dramatic criticism occurred today on the House Floor, levied by Congressman Mike Pence, arguably the most vocal of Israel supporters in the House GOP.

Pence asserted that “the American people are on the side of Israel” and asking the President, “Whose side are you on?” He went on to bash Obama for his recent change in stance regarding the blockade of Gaza. “Remarkably, yesterday, the president said it was time for Israel to sharply limit its effective blockade in Gaza, saying ‘the situation in Gaza is unsustainable.

“We all grieve the loss of life that occurred last week when a flotilla designed to challenge Israel’s effective blockade of Gaza ended in military confrontation. But Israel has a right to defend itself.

“The history is clear in that region; Gaza is controlled by a terrorist organization known as Hamas. Hamas used Gaza as a launching pad for thousands of rockets that killed innocent civilians in Israel. Israel responded with military force and has instituted a blockade that has saved lives in Gaza and in Israel. And there’s no humanitarian crisis. Ten thousand tons of food and medical supplies are transferred into Gaza every single week.

“Remarkably, yesterday the president said it was time for Israel to sharply limit its effective blockade in Gaza, saying ‘the situation in Gaza is unsustainable.’

“The truth is, Mr. President, your policy in Israel is unsustainable.

“The American people are on the side of Israel and Israel’s right to defend herself.

“Mr. President, whose side are you on?”

Congressman Pence, I can answer that question for you. It was answered before he was elected, but many of my Jewish brethren had their heads in the sand.  President Obama is on the side of the terrorists that would destroy Israel.

Israelis get it. In a recent poll, seventy-one percent of Israelis disliked U.S. President Barack  Obama, with forty-seven percent (47%) expressing a strong dislike. And sixty-three percent of Israelis were unhappy with the American government’s reaction to the incident.

Congressman Pence, we know whose side President Obama is on, my question is different, I would like to know whose side Chuck Schumer is on, or Steve Israel, Gary Ackerman, and Jerrold Nadler. Whose side are you guys on? Because you all have been strangely silent for the past year. Come on, Jerrold, do you still care about Israel, or are you afraid to go up against the Obama agenda?  Steve Israel? Ackerman? Schumer? Those Democrats and most of the Israel supporters in the Democratic caucus have all been silent, and through their silence, support the side of terrorists.