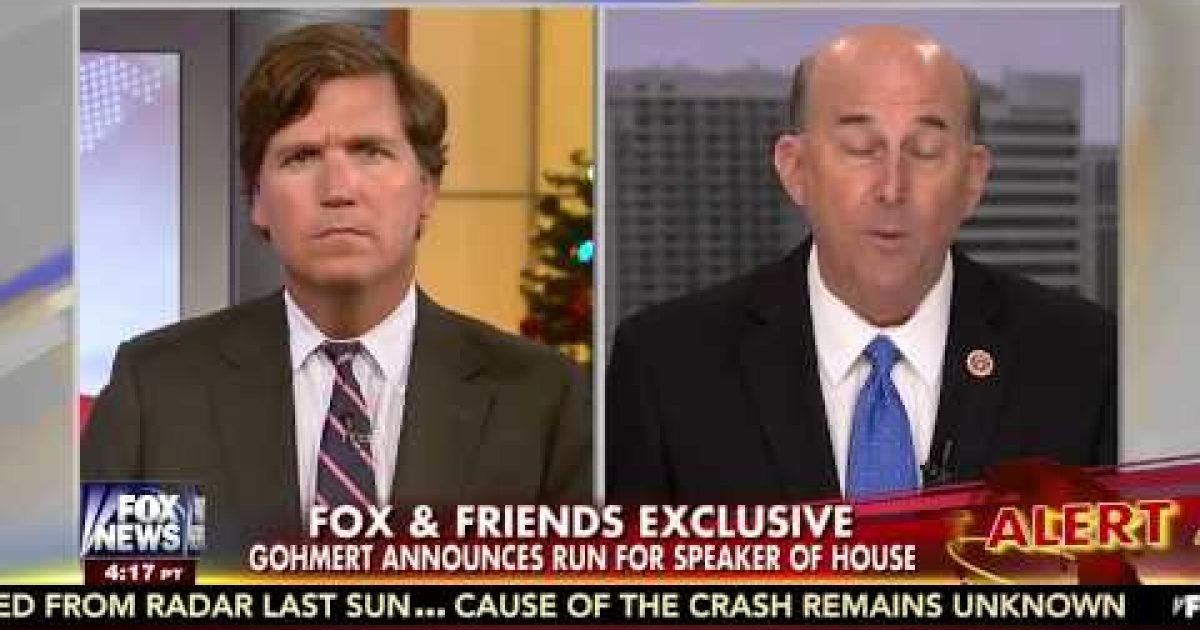 Saying “it’s time for a change,” Rep. Louis Gohmert (R-TX) appeared on Sunday’s Fox & Friends on Sunday, to declare he would run against John Boehner (R-OH) for Speaker of the House.

A poll came out Friday saying 60% or more of the Republicans in the country that voted in the last election, including independents who voted Republican, they want a change.They want a different speaker.”

Gohmert promised more conservative policies and that members would have more freedom than under Boehner.

We’ll get back to appropriating and go through regular committee process, so everybody, every representative from both parties will have a chance

Interestingly Gohmert said the only reason he came out to oppose is that Rep. Ted Yoho, a birther, came out and said he was running.

Gohmert’s entrance into the race may make things more interesting, but don’t under-estimate the political power of a sitting Speaker.

Below is a transcript of Gohmert’s announcement and a video of his entire appearance on Fox and Friends.

Well, we have heard from a lot of Republicans that said, I would vote for somebody besides speaker Boehner but nobody will put their name out there as running so there’s nobody to vote for. That changed yesterday with Ted Yoho said I’m putting my name out there, I’ll be candidate for speaker. And I’m putting my name out there also today to be another candidate for speaker. All people are welcome, unlike what some of the accomplishment people are saying that if somebody votes for a candidate besides Boehner on the floor, Pelosi could wish. That’s hogwash. The rules are you need a majority of all the votes cast for an eligible person, which is any adult American citizen. So there’s no chance of Pelosi winning as long as 59 Republicans don’t vote present. If they vote for a person, me, or anyone else in before Tuesday and we have 29 people vote for someone besides speaker Boehner, then we get to a second round or third round eventually the goal is second, third, fourth round we have enough people that say, you know what? It really is time for a change. You deceived us when you went to Obama and Pelosi to get your votes for the cromnibus. You said you would fight amnesty to the nail and you didn’t. It was a terrible strategy that follows a number of years of broke up promises. It’s time for a change and a poll came out Friday saying 60% or more of the republicans in the country that voted in the last election, including independents who voted republican, they want a change. They want a different speaker. And then when you find out new numbers this morning that the poll indicates 25% of republicans are ready to walk, they are not going to vote republican in 2016 if we don’t have a big change. Then it’s time for a change. Now, I was assured by many of our members, Louis, you don’t have to worry. This was august 2010, if we get majority, Boehner will only serve one term. They were wrong. I was right. It will take a fight to change speakers and that’s what it is coming down to.