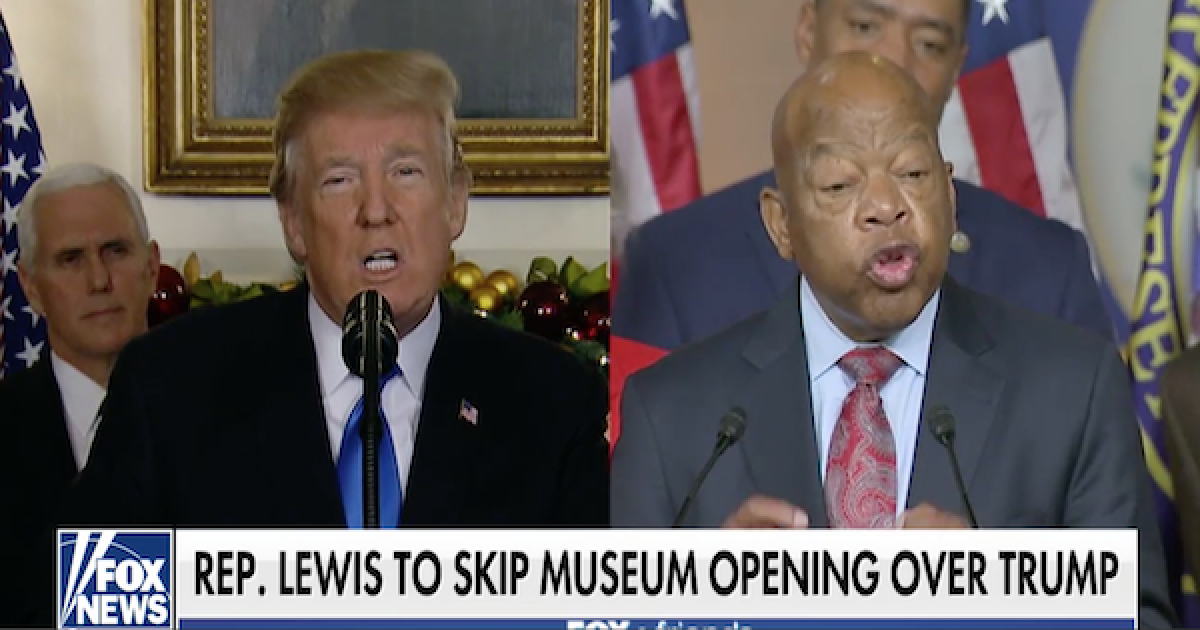 President Trump will be at the opening of the Mississippi Civil Rights Museum on Saturday, so led by Rep. Lewis (D-GA) Some civil rights leaders are refusing to attend Civil Rights Leaders are exercising their right of free association to express their feelings about the President of the United States. Enjoy the irony.

Also know that, if Trump had not planned to attend the opening of the museum, these civil rights leaders would be condemning the President for that decision.

U.S. Reps. John Lewis and Bennie Thompson will stay away from Saturday’s opening of the Mississippi Civil Rights Museum, citing the attendance of President Donald Trump.

Lewis and Thompson, both Democratic leaders, had planned to attend Saturday.

In a joint statement, they said that “Trump’s attendance and his hurtful policies are an insult to the people portrayed in this civil rights museum. The struggles represented in this museum exemplify the truth of what really happened in Mississippi. President Trump’s disparaging comments about women, the disabled, immigrants and National Football League players disrespect the efforts of Fannie Lou Hamer, Aaron Henry, Medgar Evers, Robert Clark, James Chaney, Andrew Goodman, Michael Schwerner and countless others who have given their all for Mississippi to be a better place.”

After Trump departs, “we encourage all Mississippians and Americans to visit this historic civil rights museum.”

In response to the boycott by the two congressmen, White House Press Secretary Sarah Huckabee Sanders said, “We think it’s unfortunate that these members of Congress wouldn’t join the President in honoring the incredible sacrifice civil rights leaders made to right the injustices in our history. The President hopes others will join him in recognizing that the movement was about removing barriers and unifying Americans of all backgrounds.”

White House press secretary Sarah Huckabee Sanders called it “unfortunate” that Rep. Lewis and Rep. Thompson (D-MS) would miss an event “honoring the incredible sacrifice civil rights leaders made to right the injustices in our history.”

“The president hopes others will join him in recognizing that the movement was about removing barriers and unifying Americans of all backgrounds,” she said according to a press pool report.

Rep. Lewis has a history of attacking Trump, the most famous of which occurred about a year ago when  Lewis questioned whether Trump was a “legitimate president” and boycotted Trump’s inauguration. By skipping the Mississippi Civil Rights Museum opening Rep. Lewis continues his trend of acting like a spoiled child began when he skipped the inauguration.