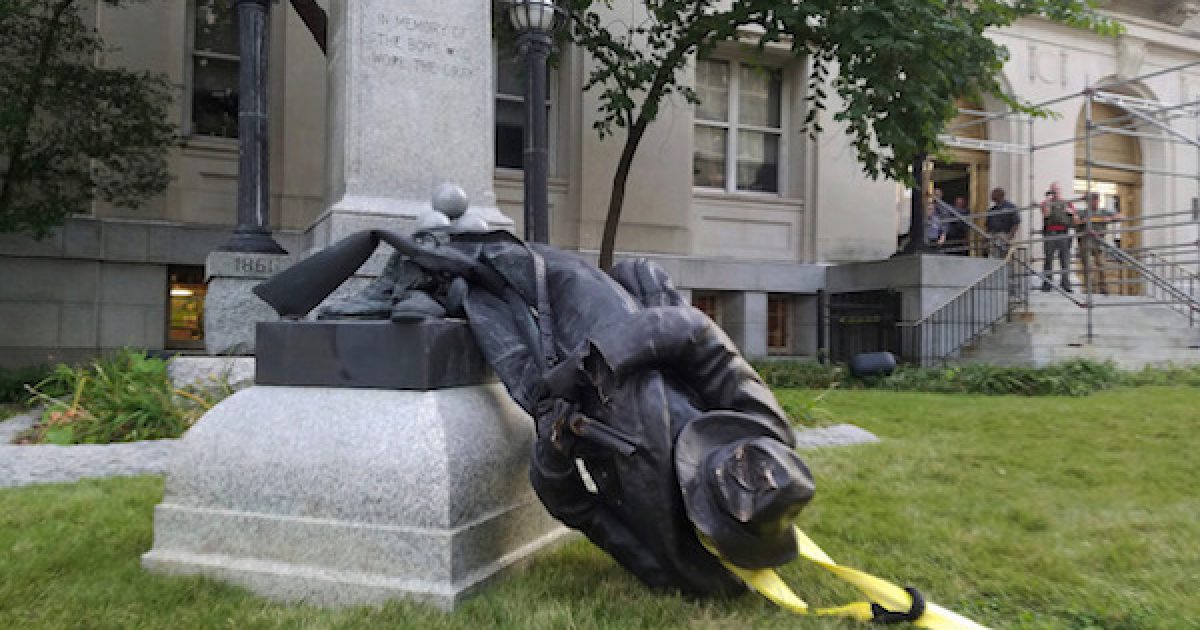 While there’s been a movement to get rid of anything “tainted” with symbols or people from the losing south in the civil war, things came to a head last week with the violent protests over removing the statue of Robert E. Lee in Charlottesville a week ago Saturday. Since then the movement to remove statues has degenerated into not only eliminating statues and other memorials dedicated to those who served with the Confederacy but to America’s founding fathers who owned slaves, Supreme Court Judges who made pro-Slavery decisions and even Christopher Columbus. At the same time, leftists have decided to take the matters into their own hands, tearing down Confederate statues and incredibly burning one of Abraham Lincoln who not only didn’t own slaves but led America in the war to end slaves. But their efforts have reached a new low as a man was arrested in Houston in an attempt to blow up a statue in Houston, Texas.

Per the Houston Chronicle:

Andrew Schneck, 25, a Houston man released early last year after a 2015 conviction on explosives charges, was arrested again Saturday night when he was caught planting explosives at the base of a Civil War statue commemorating Richard Dowling in Hermann Park.

Schneck was nabbed, “after a Houston park ranger spotted him kneeling in bushes in front of the Dowling monument in the park”

When confronted Saturday night in the park, he tried to drink some of the liquid explosives but spit it out, officials said.

The ranger then asked if he planned to harm the statue, and he said he did because he did not “like that guy,” according to a sworn statement submitted in federal court by an FBI agent investigating the case.

Schneck was holding two small boxes that included a viable explosive, a timer, wires connected to a homemade detonator, a battery and an explosive compound, according to the statement. He told law enforcement he had other chemicals at his home on Albans Road near Rice University.

Discovered Monday morning in Baltimore Maryland it was discovered that a:

225-year-old monument to Christopher Columbus said to be the oldest in the country and the world dedicated to the explorer that is still standing, has been severely vandalized.

A video posted today  (see below) shows someone smashing the inscription at the base of the 44-foot-tall obelisk located at the intersection of Harford Road and Walther Avenue, across from Herring Run Park.

This morning the words on the statue – Sacred to the Memory of Chris. Columbus Oct. XII MDCC VIIIC – were unreadable, a hole smashed in the stone.

“Racism: Tear it down,” one sign leaning on the monument base says.

“The future is racial and economic justice,” said another sign that was lying in the grass.

Perhaps I am being insensitive, but this entire erase American history by tearing down statues and monuments movement has less to do with the civil war and slavery and more to do with how American culture has changed over the past few decades. This is a generation who grew up receiving participation trophies because the purpose of sports was to feel good about one’s self, instead of kicking the butt of the other team. This generation elected leaders who believe it really possible to negotiate with terrorists or lead from behind. The way these kids were raised, they cannot bear to hear an opinion that differs with theirs, who go to schools that teach political conformity instead of the art of debate or provide safe spaces where students can escape differing opinions and bask in the warmth of group think.

Well guess what? The real world is not a safe space

Look I understand that some black Americans feel hurt or uncomfortable every time they see a statue of a Confederate soldier or flag. And most of the non-Black liberals who have joined them in the fight to remove the statues are doing so because they believe they are doing the right thing. But you know what?  I am uncomfortable whenever I see a monument to FDR who was responsible for the death of 200,000 Jews and put Japanese people into camps.I feel uncomfortable whenever I hear another school or park has been named after Barack Obama, the most anti-Semitic president in my lifetime, of when my own NY Senator Chuck Schumer honors Al Sharpton a man who invited to anti-Jewish pogroms in NYC. But that doesn’t mean I should get everything (or anything I want).

And just like I do on this site and in columns, people who are uncomfortable with the true story of American History have every right teach the world the true story behind the people being honored. But other than that…sorry folks…the real world isn’t a safe space. These statues tell the story of America, the good and the bad. And to some other, they represent their family member who fought and died on the wrong side. That doesn’t make them racists, that makes them appreciative of the lessons of what happened before them.

I call on our leaders stop removing statues and start teaching history.

Below is a video that tells it all: