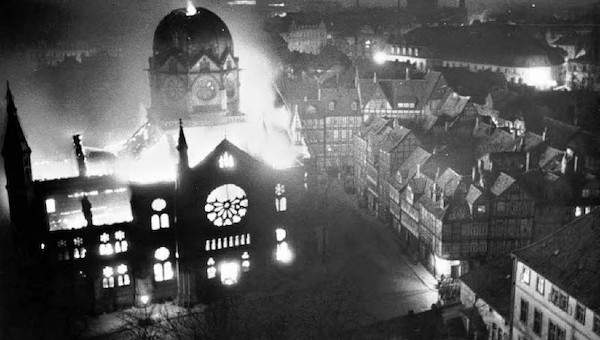 Kristallnacht, the Night of Broken Glass, was a nationwide anti-Jewish pogrom in Nazi Germany. It began on the evening of November 9, 1938, and continued through the next day.

The Holocaust is unique in its volume and horrors. It is a singular event in world history. Yes, there have been genocides of other people and other horrors. There were even other atrocities committed against the Jewish people.   But generally, genocide is waged to suppress a group and take their territory for political or economic reasons like taking their wealth or enslaving a people.

The Holocaust was different– the Jews who were targeted by Hitler and the Nazis did not have much land and held relatively little power. The purpose of the holocaust was to wipe them off the face of the Earth. Not only in Germany but in lands they took over. For example, the Vichy government in France deported approximately 75,000 French Jews into the clutches of Hitler.

Kristallnacht was a coordinated attack on the Jewish people and their property, 99 Jews were murdered, and 25,000 to 30,000 were arrested and placed in concentration camps. Two hundred and sixty-seven synagogues were destroyed, and thousands of homes and businesses were ransacked.

The attacks were carried out by Hitler Youth, the Gestapo, and the SS. Kristallnacht also served as a pretext and a means for the wholesale confiscation of firearms from German Jews and was part of the broader Nazi policy of Antisemitism. Kristallnacht was followed by more horrific anti-Semitic economic and political abuses and horrible genocide.

Recovered documents revealed plans for this Germany-wide pogrom were laid by Himmler well before November 9 and were communicated to Nazi offices in the country. They only needed to wait for a suitable occasion to open their gates of hell. That opportunity came with the murder of a low-level German diplomat in Paris by a 17-year-old Polish Jew. The Germans used that as an excuse to carry out the Kristallnacht attacks.

On November 7, 1938, Ernst vom Rath was shot outside the German embassy by Herschel Grynszpan. The latter wanted revenge for his parents’ sudden deportation from Germany to Poland, along with tens of thousands of other Polish Jews. Following vom Rath’s death, Nazi propaganda minister Joseph Goebbels ordered German stormtroopers to carry out the plan. The riots were disguised as “spontaneous demonstrations” against Jewish citizens. Local police and fire departments were told not to interfere.

Some believe the timing was selected because the date had symbolic importance. Nazi Blood Witness Day of November 9, and Martin Luther’s birthday was on November 10. Blood Witness Day commemorates the Nazi “martyrs” who died for their cause. Martin Luther advocated the destruction of Jewish homes and synagogues and the impoverishment, forced labor, exile, and death of Jews. 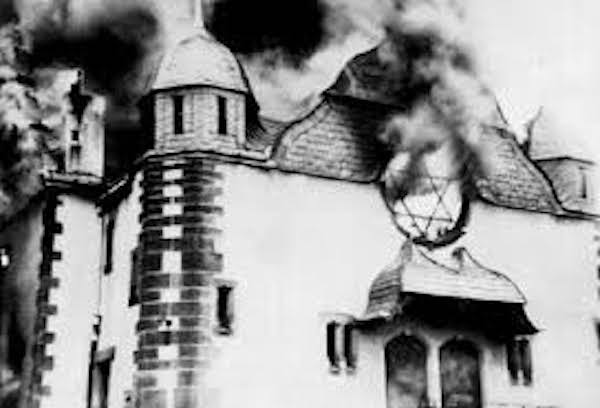 The Nazi government immediately pronounced that “the Jews” themselves were to blame for the pogrom and imposed a fine of one billion Reichsmark (some 400 million US dollars at 1938 rates) on the German Jewish community. The Reich government confiscated all insurance payouts to Jews whose businesses and homes were looted or destroyed, leaving the Jewish owners personally responsible for the cost of all repairs.

In the weeks that followed Kristallnacht, the German government promulgated dozens of laws and decrees designed to deprive Jews of their property and their means of livelihood. Many of these laws enforced the “Aryanization” policy, the transfer of Jewish-owned enterprises and property to “Aryan” ownership, usually for a fraction of their actual value. Ensuing legislation barred Jews, already ineligible for employment in the public sector, from practicing most professions in the private sector. The legislation made further strides in removing Jews from public life. German education officials expelled Jewish children still attending German schools. German Jews lost their right to hold a driver’s license or own an automobile it also restricted access to public transport. Jews could no longer gain admittance to “German” theaters, movie cinemas, or concert halls.

In a statement to representatives of the foreign press, Goebbels responded to the outrage at Germany’s assault on its half-million Jewish citizens by challenging the Western democracies: “If there is any country that believes it has not enough Jews, I shall gladly turn over to it all our Jews.” But not one country said they would take the Jews of Germany.

Nothing like the Holocaust that began on November 9, 1938, could ever happen again. Or can it?

We owe it to the people who were killed on Kristallnacht or during the Holocaust to speak out— because they can no longer speak for themselves.

But Jews in America should be heartened by the reaction to the anti-Jewish hate speech spewed by Kanye West and the NY Nets suspension of Kyrie Irving.

May the memory of Kristallnacht and the Shoah be a reminder of what happens when the world is silent.