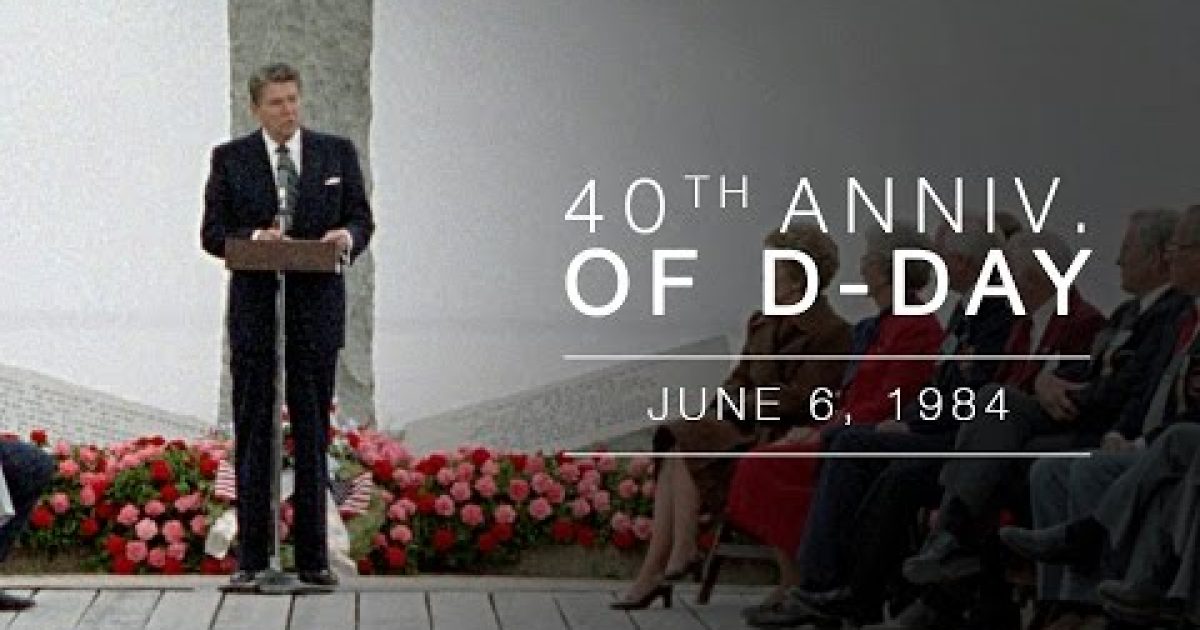 On June 6, 1944, more than 160,000 Allied troops landed along a 50-mile stretch of heavily-fortified French coastline, to fight Nazi Germany on the beaches of Normandy, France. Gen. Dwight D. Eisenhower called the operation a crusade in which, “we will accept nothing less than full victory.” More than 5,000 Ships and 13,000 aircraft supported the D-Day invasion, and by day’s end, the Allies gained a foot-hold in Continental Europe. The cost in lives on D-Day was high. More than 9,000 Allied Soldiers were killed or wounded, but their sacrifice allowed more than 100,000 Soldiers to begin the slow, hard slog across Europe, to defeat Adolph Hitler’s crack troops.

The President of the United States, FDR spoke to the people via a radio broadcast that evening:

Last night, when I spoke with you about the fall of Rome, I knew at that moment that troops of the United States and our Allies were crossing the Channel in another and greater operation. It has come to pass with success thus far.

And so, in this poignant hour, I ask you to join with me in prayer:

Almighty God: Our sons, pride of our nation, this day have set upon a mighty endeavor, a struggle to preserve our Republic, our religion, and our civilization, and to set free a suffering humanity.

Lead them straight and true; give strength to their arms, stoutness to their hearts, steadfastness in their faith.

They will need Thy blessings. Their road will be long and hard. For the enemy is strong. He may hurl back our forces. Success may not come with rushing speed, but we shall return again and again; and we know that by Thy grace, and by the righteousness of our cause, our sons will triumph.

They will be sore tried, by night and by day, without rest — until the victory is won. The darkness will be rent by noise and flame. Men’s souls will be shaken with the violences of war.

Some will never return. Embrace these, Father, and receive them, Thy heroic servants, into Thy kingdom.

And for us at home — fathers, mothers, children, wives, sisters, and brothers of brave men overseas, whose thoughts and prayers are ever with them — help us, Almighty God, to rededicate ourselves in renewed faith in Thee in this hour of great sacrifice.

Many people have urged that I call the nation into a single day of special prayer. But because the road is long and the desire is great, I ask that our people devote themselves in a continuance of prayer. As we rise to each new day, and again when each day is spent, let words of prayer be on our lips, invoking Thy help to our efforts.

Give us strength, too — strength in our daily tasks, to redouble the contributions we make in the physical and the material support of our armed forces.

And let our hearts be stout, to wait out the long travail, to bear sorrows that may come, to impart our courage unto our sons wheresoever they may be.

With Thy blessing, we shall prevail over the unholy forces of our enemy. Help us to conquer the apostles of greed and racial arrogances. Lead us to the saving of our country, and with our sister nations into a world unity that will spell a sure peace — a peace invulnerable to the schemings of unworthy men. And a peace that will let all of men live in freedom, reaping the just rewards of their honest toil.

Thy will be done, Almighty God.

70 Years ago General Eisenhower gave this message to the troops as they were about to cross the English Channel:

I have full confidence in your courage, devotion to duty and skill in battle. We will accept nothing less than full victory!
Good Luck! And let us all beseech the blessings of Almighty God upon this great and noble undertaking.

D-Day was the beginning of the end for Germany, V-E day was eleven months later, V-J Day was three months after that.

America needs a leader like Reagan or Eisenhower today!

Remember to say a Prayer today asking for God’s face to shine upon those who risked and/or lost their lives to save the world 70 years ago. We owe our freedom to them.