In August, federal judge Judge Matthew Kacsmarykin sided with the states of Texas and Missouri by ordering the Biden administration to revive a Trump-era border policy that required migrants to stay in Mexico until their U.S. immigration court date. The supreme court refused to grant a stay as the case moved up the judicial ladder, but it didn’t rule on the case’s merits.

Now, two months after the order,  the Biden administration is finally ready to follow the order and restart the program providing it gets agreement from Mexico. Even if Mexico agrees with the program’s revival, Team Biden will appeal Judge Kacsmarykin’s ruling. They are hoping to eventually cancel the program again.

The remain in Mexico program forced illegals to stay in Mexico until their immigration court hearings,

Shortly after Joe Biden took office, he canceled many of the programs implemented under Trump to stem the tide of illegal immigrants sneaking across America’s border. Since the new administration opened the borders by bringing back catch and release, stopping construction of the border wall, ending the remain in Mexico program, and others, illegal immigration took off: 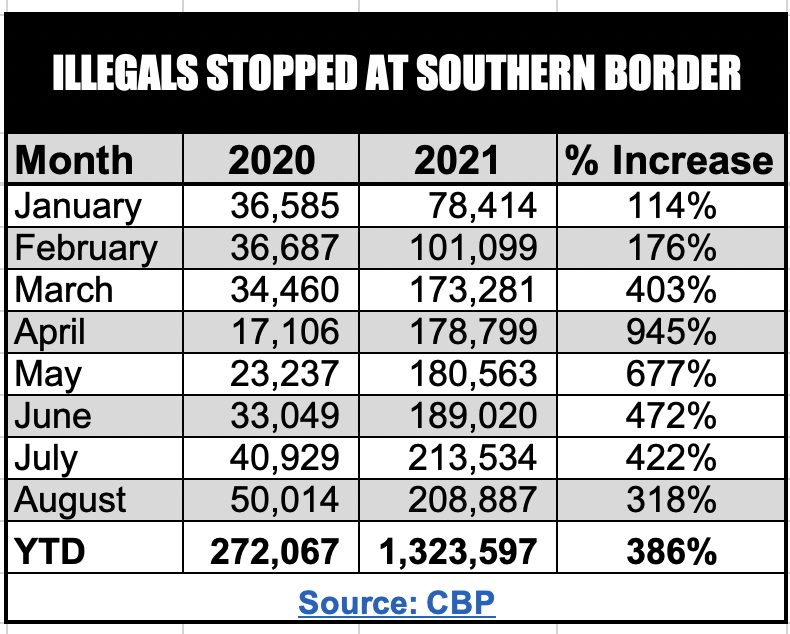 And these are just the people we know about—not every illegal alien is “stopped” at the border.

If the program is really reimplemented, it will help a bit:

The Biden administration told the courts late Thursday that it plans to re-implement the Trump-era Remain in Mexico policy in mid-November if it can get buy-in from the neighboring government.

The move comes after an initial victory by Texas and Missouri in a suit that argued the Biden administration too hastily withdrew the policy, under which the U.S. transported 70,000 asylum seekers to Mexico to await a determination in their case.

The Department of Homeland Security (DHS) has appealed the case and is working on a memo to rescind the program anew, but it is still required to reimplement what was formally termed the Migrant Protection Protocols (MPP) “in good faith.”

Understand that remain in Mexico slowed the tide of Illegals by ensuring they stay out of the U.S. until their court date comes up. It also stops many illegals from even trying to trek up north to the border because they don’t want to stay in a Mexico holding facility. Those holding facilities do not have the best living conditions, and they have seen some violent crimes.  Of course, there is a program much safer for illegal aliens. It’s called the remain in your own country and don’t illegally trespass into ours.

After saying they will reimplement the program, DHS issued a statement “that the department remains committed to building a safe, orderly, and humane immigration system that upholds our laws and values.”

An immigration system that upholds our laws??? OMG!  DHS secretary Mayorkas is such a funny guy.

Over at Hot Air Ed Morrissey has an excellent but different take on the DHS announcement I recommend you click here and give it a read.