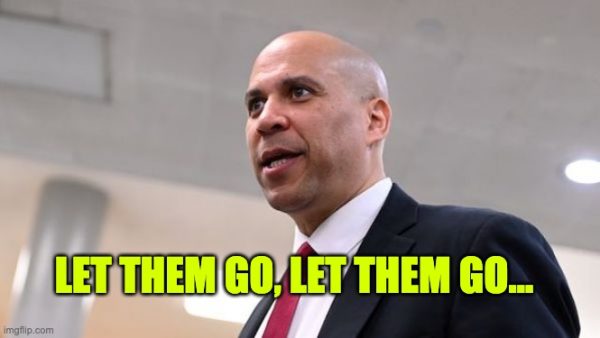 Democrats are introducing legislation that would force the release of illegal aliens in detention and stop enforcement measures against them also. Sen. Cory (Sparticus) Booker: “Detention centers are like a ticking time bomb — they are severely at risk for a COVID-19 outbreak, considering the close quarters in which detainees are housed and a population with much higher rates of underlying health issues.” He continued: “We have an obligation to do everything we can to prevent the spread of this deadly disease, and that means moving people out of detention centers when they do not pose a public safety risk.” release immigrant detainees

Democrats are introducing legislation that, if signed into law, would mandate the release of illegal aliens in detention and stop enforcement measures against a large number of aliens living unlawfully in the United States.

New Jersey Sen. Cory Booker and Washington Rep. Pramila Jayapal introduced the Federal Immigrant Release for Safety and Security Together (FIRST) Act on Monday. While many Democratic members of Congress have urged the Department of Homeland Security (DHS) for a rollback of enforcement measures amid the coronavirus pandemic, this bill marks one of the first instances where they are turning such concerns into legislative action.

The FIRST Act would release most immigrants out of detention facilities and stop Immigration and Customs Enforcement (ICE) from targeting at-large illegal aliens who are “not deemed a significant public safety risk” during the coronavirus health emergency.

Notably, ICE has already announced that it would scale back its enforcement and removal operations against those who do not pose serious risks to the community. However, the bill would have sweeping effects on the immigrant detainee population in the United States. More

Why not just enforce our laws and deport them?

They never quit do they. Middle of a National Emergency. We have a pandemic, businesses are shut down, unemployment through the roof. The left is more concerned with people here illegally.

Democrats prove time and time again that they are unconstitutional and should be repealed as a political party in the United States. They seek continuously, feverishly to break the laws. Chicago, Detroit, Philly, St Louis, LA with gang violence & homelessness is their legacy.

I’ll believe the dems actually care about illegals when they open their homes to them. All of their multiple homes. Tear down their security walls and lock the gates open.

Anything for the illegals but nothing for American citizens!!!

Dems are using the coronavirus crisis to pass their radical open borders agenda. They want to mandate the release of illegal alien detainees & stop ICE from enforcing our laws.

I will help @realDonaldTrump secure our borders & restore law and order! #MN07 https://t.co/yka0SuoFIG

It will never pass the Senate, thank God!