Reince Priebus: Hillary ‘Somehow Can’t Manage To Connect The Dots In The World Of Presidential Politics’ 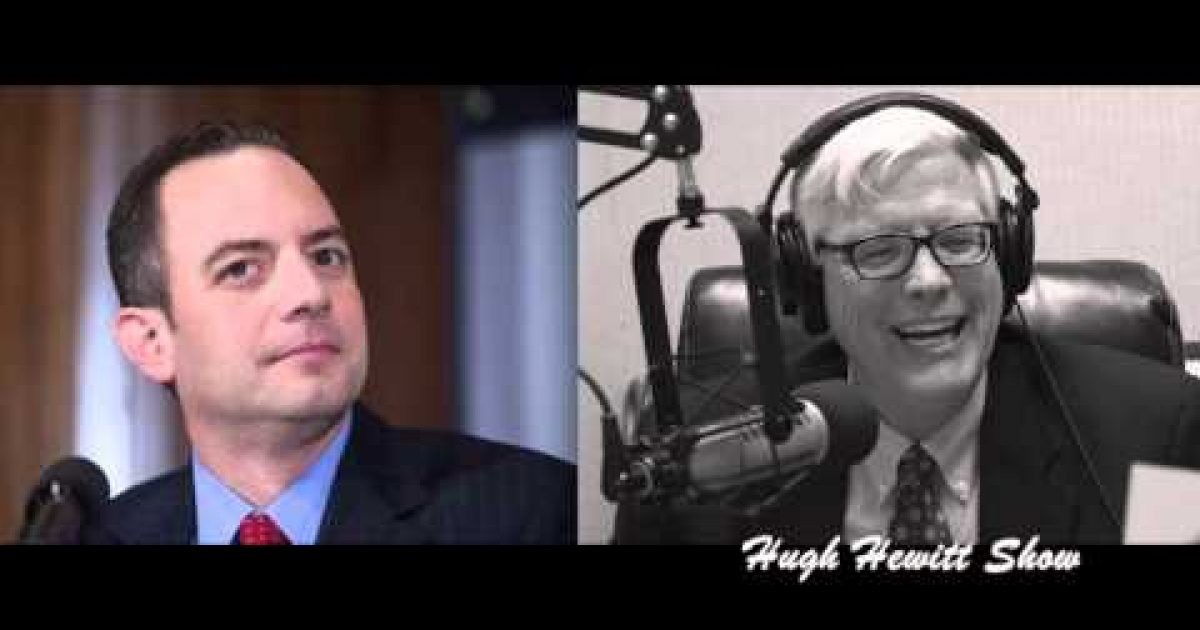 RNC Chairman Reince Priebus was a guest on Tuesday evening’s Hugh Hewitt Radio Show and by the sound of it, isn’t very worried about a Hillary Clinton run for the presidency.  Hewitt and Priebus agreed that Clinton is being held back from announcing a run because her staff is afraid of a Roger Mudd/Ted Kennedy moment.

For those who do not remember what that refers to, during the 1980 campaign it seemed as if Ted Kennedy would be able defeat incumbent Jimmy Carter for the Democratic Party nomination until Kennedy sat down for an interview with Roger Mudd. When Mudd asked the Massachusetts Democrat the simplest question, “Why do you want to be president?” Kennedy had no answer and his candidacy was doomed before interview was over.

According to Priebus, Clinton not only doesn’t have an answer for the question above, but she isn’t the best campaigner in the world, “You know, I think that when she’s come out into the political world, her
approval ratings have gone down. She’s been mistake prone. And the more
she’s out there, the worse off she is. And I think she actually knows
this. At least her team knows it, and that’s why they’re keeping her out
of the public eye.”

A transcript and video of the interview follows:

Hewitt: I wanted to talk to you today about Hillary’s hiding, because she tweets, she comes out like Groundhog Day when her shadow isn’t there. She comes and out and she tweets something. She tweets approval of the President’s state of the Union, approval of his immigration reform. But we can’t find her on the Iran deal, and we’re not going to find her on climate change being a greater threat than terrorism, Reince Priebus.

Priebus: Yeah, I think her last tweet was about the measles, which was great, but she hasn’t really made a public appearance all year in the United States. I think she did something in Canada. She, to give people an idea what we’re talking, when we’re talking about Hillary hiding, it’s been over 202 days since her last press conference. She hasn’t done an interview like this, any interview like this. She doesn’t have to call Hugh Hewitt, but any radio station, any publication, for over 180 days.

Priebus: I mean, this is a person preparing to run for president.

Hewitt: I know. Yesterday, I talked to John Bolton and Marco Rubio, and last week, I talked to Mike Huckabee and Rick Perry. They all show up and they take questions. They have no idea what I’m going to ask them. I asked Scott Walker, your pal, I admire him a great deal, what’s it like to run without a college degree. I ask all the obvious questions. She doesn’t get asked anything by anyone.

Priebus: Well, that’s right. And every time I come on your show, we make news somehow or another, and but you know what? You don’t even need to go on, even what I’m suggesting is she hasn’t done an interview with the New York Times. I mean, she can go to her friendly format. But you know, she wants, here’s the thing, she wants to get out of the way. She wants to be the inevitable candidate. She wants to be the one that is guaranteed to get the Democrat nomination. And quite frankly, I don’t think it’s all that bad for us. I actually think Hillary isn’t that great at politics, and the truth is she’s not as well liked, I mean, I have to put it in context. If you go back to 2008 or 2012, she isn’t as well liked as the president was at that time. And so look, we’re going to have a lot of the youth, a lot of the energy, a lot of the new faces of America on the Republican side of the aisle, and I think that as long as we can contain the process with some reasonable effort, I think that we are going to be in great shape to retake the White House in 2016.

Hewitt: Now Reince Priebus, two-part question. Does Hillary Clinton have a glass jaw? And Does she know that she has a glass jaw, and that’s why she’s hiding?

Priebus: Well, she’s certainly proven in the past that she somehow can’t manage to connect the dots in the world of presidential politics. And it is really difficult. It is not easy. You know, I think that when she’s come out into the political world, her approval ratings have gone down. She’s been mistake prone. And the more she’s out there, the worse off she is. And I think she actually knows this. At least her team knows it, and that’s why they’re keeping her out of the public eye.

Hewitt: Well, that’s, I go back to the famous or infamous interview that Roger Mudd had with Teddy Kennedy. Is she afraid of a Mudd moment?

Priebus: Well, I think it’s, I think that she’s afraid, or at least her team is afraid of putting out, putting her out there too soon. As long as she’s ahead by 40 points over any potential Democrat challenger, their view is why get out there? Why even take a risk? We’ve got nothing to gain, only to lose, and so let’s just keep what we’re doing up, and we’ll just stay out of everything until we need to be. That’s not a bad idea if you want to make sure that you wrap up the Democrat nomination. The problem is for her is in the general election, the general public has the opinion that the more they see of Hillary, the less they like her. And there’s no way she can avoid that.

Hewitt: But if you’re the chairman of her party, aren’t you afraid of the glass jaw, of the Mudd moment? I mean, she’s not getting in her reps. She’s not doing anything to get ready for this.

Priebus: Yeah, exactly, but the problem is on their side of the aisle, the party doesn’t have any horsepower. So you’ve got Barack Obama, whose totally disengaged, you have the Vice President who isn’t apparently respected by his own base. And so the entire party is wrapped up in the Hillary Clinton and Ready For Hillary. And so all of the power on the Democrat side of the aisle is there. They’ve got, they don’t a majority in the House, they don’t have a majority in the Senate, so you tell me. They’ve got, what, 20 governors. I mean, who is the power on the Democrat side of the aisle? They don’t have anyone at the table. So it’s all Hillary. So if it’s all Hillary, and they’re deciding what they’re going to do with Hillary, then that’s what you’re getting.