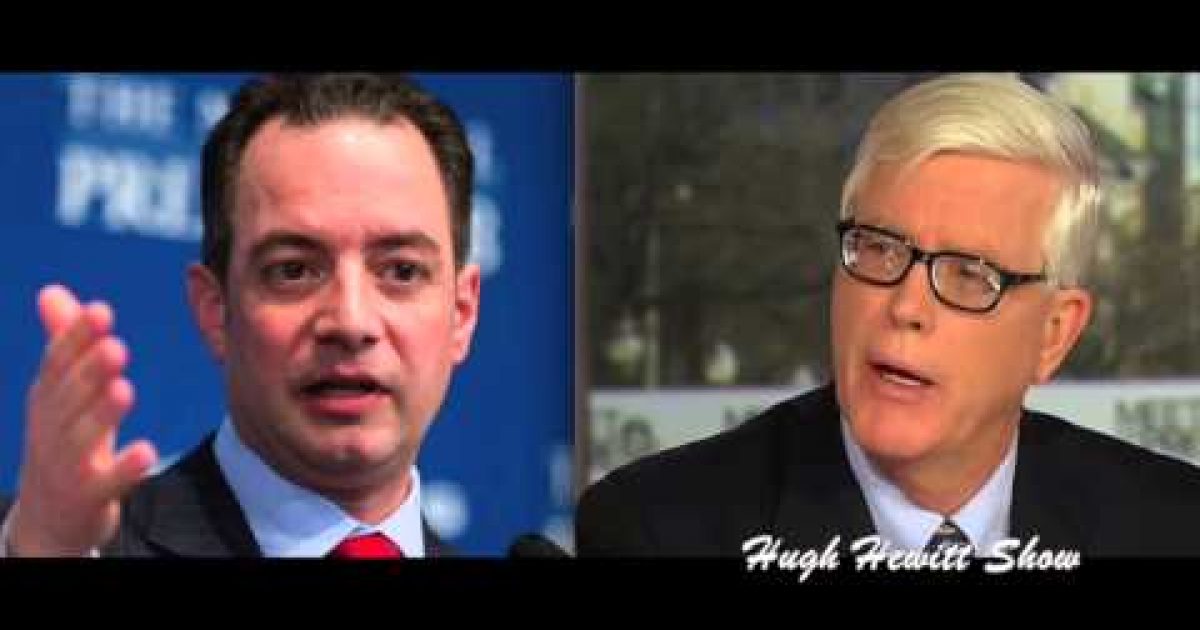 The GOP announced today that it will team up with CNN as the exclusive radio outlet to broadcast three GOP presidential primary debates, sanctioned by the Republican National Committee. Salem will air the debates live with special pre- and post-debate coverage on the Salem Radio Network, the company’s NewsTalk stations, and conservative news and opinion websites.

The first of the three debates will take place September 16th at the Ronald Reagan Presidential Library in Simi Valley, California. Salem’s nationally syndicated radio talk show host Hugh Hewitt will join in the Q&A of this debate. Hewitt is a 25-year veteran of radio and broadcast journalism was chosen on the basis of having  a great producer, Duane Patterson.

The Chairman of the RNC  Reince Priebus was on Tuesday’s Hugh Hewitt program to discuss the deal which he called one of his most significant accomplishments.

Hewitt: But I open this hour with Reince Priebus, chairman of the Republican National Committee. You ought to be following Reince, @Reince on Twitter, and I want to thank him, because it was because of his efforts that the Salem Media Group is able to co-sponsor with CNN three debates, in which I will be a participant. I don’t know who the moderator is going to be, yet, but Reince Priebus, great to have you, thank you for setting this stuff up. You’ve worked a revolution.

Priebus: Well, hey, congratulations to you and congratulations to Salem Media. This is exactly what I wanted to do a couple of years ago when we talked about taking control of the presidential primary debate process. And I was never interested in turning the debate process into some kind of patty-cake session, but that we would have serious journalists, serious people that wanted to get involved in asking questions and creating a debate environment that would bring honor to the Republican Party, not a debate environment spurred on by nefarious actors like Chris Matthews and others. And so, you know, we’re going to have a reasonable number of debates, and we’re going to have conservatives help in the moderating and the management of these debates, and today was a big announcement. I’m excited about it. I’m happy for you.

Hewitt: I am, too. I’ve got to tell you, the Twitter reaction, the new media reaction was like Pharaoh getting met by Moses. Conservatives are so desperate to have some of their questions asked and answered, it’s not really about dominating the debate, and I’m sure the moderator from CNN will be very competent, whether it’s Jake or Anderson Cooper or Wolf Blitzer or any of their people. But just having some panelists who are conservatives will change the debate fundamentally.

Priebus: Well, that’s right, and also, there’s a little check and balance, too. And you know, when someone wants to ask a half an hour’s worth of questions about birth control when there’s far many other things to talk about in an hour and a half, you know, someone’s going to be able to say hey, what are we doing here? And so look, I think it’s a good step for our party. The candidates, I think, are also on board with it. I know that they’re on board with making sure that we have a reasonable process with a reasonable number of debates. And I’ve got to tell you, I think that having, all this debate about all the candidates, I think having interest and intrigue, and a little bit of drama, is just fine as long as you can contain the process. If you can contain the process, I think we’re far better off than the boring situation on the other side of the aisle, which is just Hillary Clinton and her debating and screaming about equal pay when in fact, she herself is the person that only pays women 72 cents on the dollar. So…

Hewitt: You’re referencing an article by Brent Scher over at the Washington Free Beacon yesterday. It’s a great piece, and I want to read it for people. Hillary Clinton portrays herself as a champion of women in the workforce, Scher writes, but women working for her in the U.S. Senate were paid 72 cents for each dollar paid to men according to a Washington Free Beacon analysis of her Senate years salary data. During those years, the median annual salary for a woman working in Clinton’s office was $15,708.38 less than the median salary for a man according to the analysis of data compiled from Senate expenditure reports. You know, Reince Priebus, she’s in California today. I think she’s talking about pay equity.

Priebus: Right, exactly, the typical, typical, hypocritical, I think, double standard that takes place in the media. And you know, when Anita Dunn writes a book about what it’s like to be a woman and work in the White House, you hardly get any coverage about it. When President Obama in his state of the Union address once again starts talking about equal pay, which by the way, I agree with, but he himself doesn’t pay women the same amount that he pays men in the White House, you know, instead of asking our people about who’s a patriot, who’s a Christian, they ought to start talking about whether or not these people are lying about rather important issues that they themselves can’t live up to their own standards.

Hewitt: Yeah, now I’ve got to ask you about one other thing. Scott Walker blasted the mainstream media today for gotcha questions. And this is all after the big Rudy Giuliani/Scott Walker story, and everybody in the world is talking about Rudy Giuliani. And I asked Rick Perry about it last week when he was on the program with me. At the same time, numerous, I mean, the Joe Biden story about the Somali cab drivers that don’t exist in Delaware, all this stuff doesn’t go reported. It’s not that they’re not interesting stories, Reince Priebus, it’s that there’s no coverage of those that are damaging to the President or Hillary.

Priebus: There’s another one, too. I mean, the last few days, if you read some of the allegations out there about Debbie Wasserman Schultz and her flip-flopping on marijuana laws, and willing to change her vote and talking obviously about the fact that she was preparing to allege that the President and others were anti-woman and anti-Semitic if they wanted to get rid of her as chairwoman of the DNC. You know, where are the Democrats on TV being asked do you agree with this? I mean, do you support what Debbie Wasserman Schultz is doing? Or the opposite, maybe Debbie Wasserman Schultz is right. Do you support the President and his quest to get rid of a female chairwoman of the DNC? You never hear the questions like that played on the other side. And even people like Mark Halperin and today, Chris Cillizza came out with an article saying the RNC has a point. And if anything, this little circus last weekend, where this Beltway media is actually tweeting to each other, and if you follow this, and I hope you don’t, but if you follow a lot of these Beltway journalists, they talk to each other all day and all night long about these types of debates. And it’s always the same thing. And so look, this idea that a third party is going to be able to tell what another party has in their heart is not just a ridiculous sort of exercise, but is a total waste of time. And it is completely irrelevant to the truth.

Hewitt: I just tweeted out for people who are interested a Christian Science Monitor, no organ of the conservative media there, story on this imbalance, and I would encourage everyone to take a look at that.

Hewitt: Let me conclude by going back to the debates. Obviously, Salem Media is partnering with CNN for three of them. There are nine of them. And the very first one is going to be in Ohio, because you are a wise person and you understand the centrality of Ohio.

Priebus: You’re getting everything you want.

Priebus: You’re going to be moderating a debate and the convention’s going to be in Cleveland.

Hewitt: And I just assumed that anyone who’s been a participant in one of these debates, and I keep saying participating. I’m not moderating. CNN’s moderating, and I want to make sure everyone, and I don’t know who the moderator is, but I think we get all access passes to the convention as well, and tickets to the Browns Super Bowl game. But those other debates, the first one’s Fox in the summertime. You’ve got at least seven others. Have you already figured out who the other conservative media partners are, Reince Priebus? Or is that still a work in progress?

Priebus: It’s still a work in progress. The Salem piece, I’ve been all over for a year and a half, so that was like the first thing I wanted to make sure happened. And so all the other announcements will be coming, and we’re working with other conservative outlets as well to make more announcements. So we will live up to our promise to our supporters and people out there that agree with us, that we are going to have a reasonable debate process that will include people who actually give a darn about our party in the process. And so today is the first step in the right direction.

Hewitt: So I got asked today, last question, I think it was Dylan Byers, it might have been Dave Weigel, about the Reince reforms. I said there’s the moving up the convention, there’s the ordering of the primary calendar, there’s the changing of the debate format to both be compressed and add conservative voices. Of those big three Reince reforms, which one do you think is most significant?

Priebus: I think controlling the debates. I think having control over the debates so that we don’t turn this into a 23 debate circus in front of people who don’t care at all about the party but only care about making news for themselves, that’s number one. Then number two is the compression on the calendar so that we don’t have a six month slice and dice festival in our party.

Hewitt: And so when do you expect the last state to make up its mind about the scheduling of their primary? That’s got to be done fairly soon, doesn’t it?

Priebus: Well, they have until October under the rules, so a lot of states are moving around. My suspicion, though, is that there’s going to be a big date on March 1st. There will be a big winner-take-all on March 15th. I think the next Tuesday after that will also be significant. But my guess is that two-thirds of all the delegates will be allocated before the end of March. Hewitt: That’s big news. Reince Priebus, always a pleasure to talk to you, Mr. Chairman. Look forward to being a participant in the second debate, the one at the Reagan Presidential Library moderated by CNN. Thank you so much, Mr. Chairman