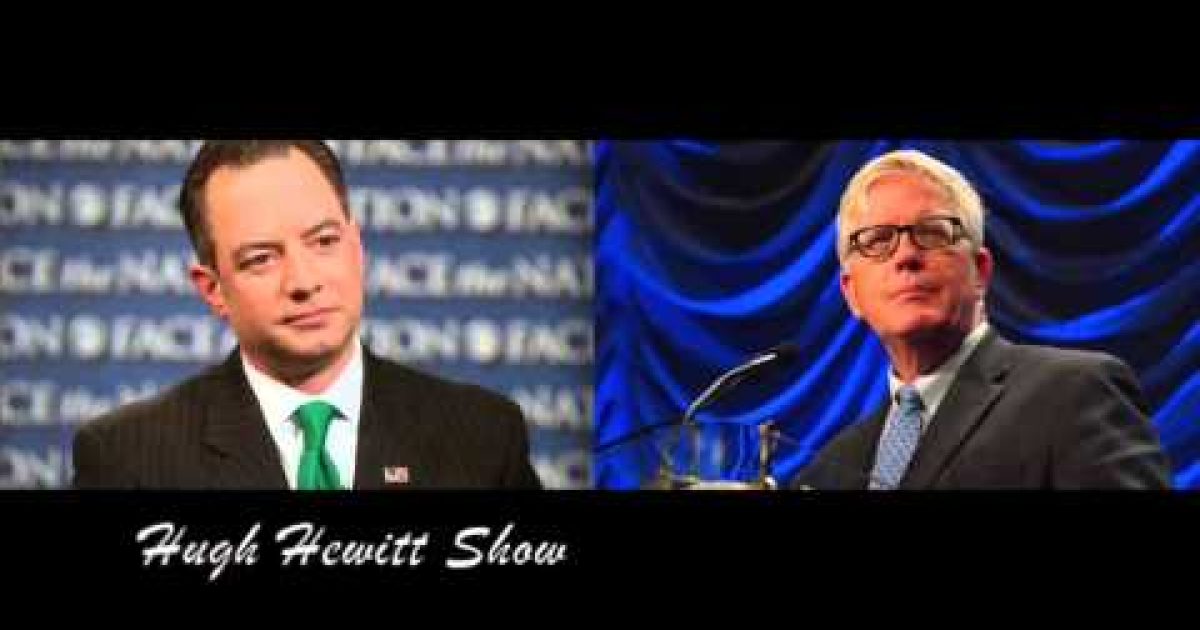 RNC Chairman Reince Priebus was a guest on Monday night’s Hugh Hewitt Show to discuss the debate schedule announced on Friday and Tuesday evening’s State of the Union.  On the debate front he revealed two things that were not part of Friday’s announcement. He is trying to arrange that people from conservative media are part of the panel of more than just the one conservative debate. Also there will be a rolling threshold, a percentage below candidates will not be able to participate. But rather than it being a decision of just the network covering the debate, the RNC will be involved and it may be a different number with each debate.

Hewitt: Well, I want to come back and talk about the State of the Union in a second, but first, the debate schedule. You released the nine and the three pending. The first one’s in Cleveland, right? This is very important. You finally figured out Cleveland is where everything good begins.

Priebus: It all started with you, by the way.

Hewitt: I take credit for that. But there are no…you should put…

Priebus: You should take some credit for it, because you beating on it did have an effect.

Hewitt: Well, there’s always repetition. If it can’t be talented, at least keep running the ball. But you’ve only got it going there once. I want to know about the media partners, and how you’re going to, if you’ve done any planning on double digit numbers of candidates at these debates.

Priebus: Yeah, okay, so those are two different issues. The first issue is on the conservative media front, you know, we were close to announcing everything last week, but I needed to button down a few things to make it very clear what we were doing. And so very soon, what we will do is announce in some cases conservative media partners with the current, with the nine that you’re seeing there on a piece of paper. So you’ll see media partners join in with the base that you already see and think are set in stone. And in many cases, those nine debates will expand to include conservative media partners. Those announcements should come soon. I don’t want to put, you’re looking at weeks rather than months, as far as those announcements, so that’ll happen soon. And then…

Hewitt: How do you do 20 people on a platform?

Priebus: Well, you can’t. I mean, you can’t do 20 people. So what you have to do, and not necessarily the RNC or the media partners, last time, the media partners did it exclusively. But I think in combination with the RNC and the media partners, and this is not in stone, but I just want to give you a flavor for what I’m talking about. You have to have certain thresholds in place. So you have to be at 1% of the vote in Iowa, and that threshold can move like a slide rule based on the proximity to the Iowa Caucus and the New Hampshire primaries, etc., just like it did before. You might recall that in some cases of the, people forget there was probably 30 or 40 people actually running as a Republican in 2012. You just, most people have only heard about 10 or 12 of them, but there was actually 30-40 people that ran as a Republican for president. We can’t put 40 people on the stage. So, but how, but what we did, though, was we put a threshold in place so that there was minimal standards of meeting before a person could actually qualify to be in the debate.

Hewitt: It could be, though, that you have a double digit, low teens of people who are qualified by position and polling And would you use stadium seating at that point?

Priebus: (laughing) Well, yeah, I don’t think so, Hugh. I mean, I think what, I think things have a way of working themselves out. And so if you needed to get two, three, four, five percent of the vote in some of these places in order to qualify for the debate, I think, I don’t think you’re going to see that. But you could have nine. I think that, you know, if some of the, if you look at the percentages of what one or two percent in Iowa would get you, you could have eight or nine people on the stage. I’m just not sure. And I don’t want to miss anything…