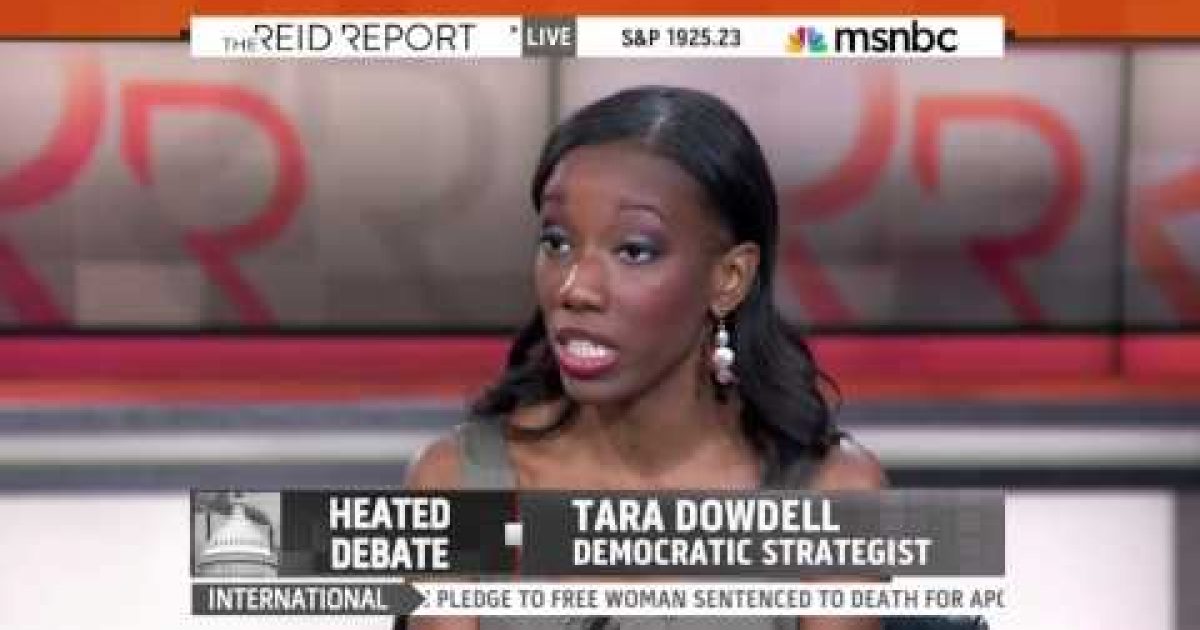 On Monday’s The Reid Report, host Joy Reid and guest Tara Dowdell discussed the President’s latest action to bring down carbon emissions. Dowdell, a Democratic strategist, explained, “Climate change also affects our weather patterns. These storms like Hurricane Sandy. Look how much money Hurricane Sandy cost this country and homeowners, cost businesses. Those are all costs.” Ms. Dowdell’s statement ignored the fact that even the UN’s IPCC, acknowledged by global warming believers as the best climate change authority, does not believe there is proof that global warming causes extreme storms.

Reid: So why is tghe administration going big on the climate fight right now? Tara Dowdell is a Democratic strategist. OK Tara, you had already ALG  [Kentucky Democratic candidate for Senate, Alison Lundergan Grimes] distance herself from the White House. You now also had Mary Landrieu, also from an energy producing state; she just released a statement saying, “While it is important to reduce carbon in the atmosphere this should not be achieved by EPA regulations. Congress should set terms, goals and timeframe.” Is this dangerous to Democrats in the red states or an opportunity to put some political distance to their benefit between them and the White House?

Dowdell: Well, obviously it is politics, so in politics you have to play politics. So I think for them, they do have to distance from President Obama on this issue because they come from states where a lot of people are employed in the industries, for better or for worse. In many instances, for worse, because as the President mentioned, these coal power plants have a lot of negative consequences. One of the things I think the Democrats need to drill down a little more on is not just the health concern. Those are very, very important, but there is an economic case to be made as well. Because if people do have asthma, asthma is one of the biggest causes of people being admitted into the emergency room. Climate change also affects our weather patterns. These storms like Hurricane Sandy. Look how much money Hurricane Sandy cost this country and homeowners, cost businesses. Those are all costs.

Putting aside the fact Ms. Dowdell’s comments about the heath risks of coal plants address air pollution, which is not the same thing as climate change, the Democratic strategist’s comments about global warming and extreme weather events like Hurricane Sandy is totally repudiated by the facts.

One of Germany’s leading meteorologists, Dominik Jung, slammed this kind of reaction when it was made about Typhoon Haiyan:

For many ‘climate experts’ this recent event is a feeding frenzy that allows them to pound the drums of ‘evil climate change’. And here not a single one of these ladies and gentlemen are able to show that such storms never existed over the past hundreds of years, let alone that this storm is connected to a man-made climate change.

A study published in the July 2012 Journal of the American Meteorological Society concluded unequivocally there is no trend of stronger or more frequent storm. asserting:

We have identified considerable inter-annual variability in the frequency of global hurricane landfalls, but within the resolution of the available data, our evidence does not support the presence of significant long-period global or individual basin linear trends for minor, major, or total hurricanes within the period(s) covered by the available quality data.

Even the UN’s IPCC , acknowledged by global warming believers as the best climate change authority, does not believe there is proof that global warming causes extreme storms.

…In its [IPCC] newly released Fifth Assessment Report, the panel backed away from connections between current droughts and climate change. As it noted: “Based on updated studies, AR4 conclusions regarding global increasing trends in drought since the 1970s were probably overstated,” and “there is not enough evidence at present to suggest more than low confidence in a global-scale observed trend in drought or dryness (lack of rainfall) since the middle of the 20th century.” The report states that “it is likely that the frequency and intensity of drought has … decreased in central North America and north-west Australia since 1950.

The new report delivers a similar verdict for other sorts of extreme weather: “There is low confidence in any long term increases in tropical cyclone activity … and low confidence in attributing global changes to any particular cause.” Any increased hurricane damages “have not been conclusively attributed to anthropogenic climate change; most such claims are not based on scientific attribution methods.” There is “low confidence” for trends on tornadoes, and “the evidence for climate driven changes in river floods is not compelling.

Perhaps if the host of The Reid Report spent some time researching all sides of an issue instead of blindly following President Obama’s talking points, she would be able to avoid guests telling falsehoods about global warming on her program.

VIDEO: Sen. Ted Cruz Completely Unloads On AG Merrick Garland, Takes Him To The Woodshed On Why He Dodged Critical Question
Ken Blackwell

ALERT: Thanks To Biden ISIS Terrorists Will Be Ready To ATTACK America In 6 Months Or Less According To THIS Accurate Source
AFF