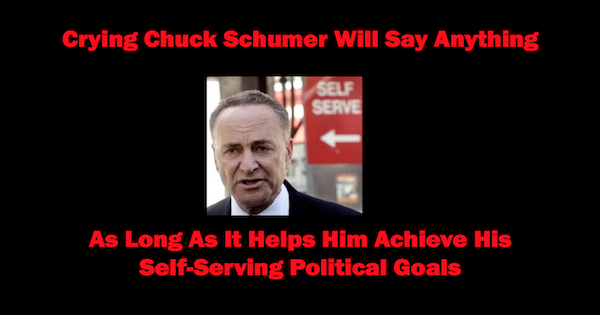 Even before President Trump named Neil Gorsuch as his pick to replace Justice Scalia on the Supreme Court Democratic Party leaders led by the Senate Minority Leader, New York’s Chuckie Schumer,  were telling lies/spinning the truth about the history of recent Senate confirmation votes with statements such as justices are always approved with 60+ votes, or this is a stolen court seat.

The below substitutes facts for the nonsense people like little Chuckie Schumer (D-NY) has been spewing:

Schumer/Democratic Party Claim Number One: Republicans should not even think about using the nuclear option, Supreme Court Justices are always confirmed with a bi-partisan vote above the 60+filibuster threshold.

Here the NY Senator’s claim is half-true. Nominees of Democratic Party Presidents usually zip through with little or no opposition.  However when evaluating candidates from GOP presidents the Democrats are not always as non-partisan as Republicans. Robert Bork, a brilliant jurist was slandered and rejected, Justice Clarence Thomas was slandered but passed with only 52 votes, and Justice Samuel Alito was approved with only 52 votes.

In 2006, when Alito’s nomination came up for a vote, John Kerry (D-MA) led a filibuster and did his best to smear Alito (perhaps because he didn’t have Israel to lie about yet)

“Judge Alito will take America backward, especially when it comes to civil rights and discrimination laws. It’s our right and our responsibility to oppose him vigorously and to fight against this radical upending of the Supreme Court.”

Some of the senators who joined Kerry in the failed filibuster attempts were: Dick Durban (D-Il), Hillary Clinton (D-NY), Joe Biden of (D-DE), Harry Reid (D-NV), and the junior senator from Illinois, Barack Obama, and of course Chuckie Schumer.

On January 29, 2006, Mr. Obama told George Stephanopulos on “This Week” that he would “be supporting the filibuster because I think Judge Alito, in fact, is somebody who is contrary to core American values, not just liberal values, you know. When you look at his decisions in particular during times of war, we need a court that is independent and is going to provide some check on the executive branch, and he has not shown himself willing to do that repeatedly.”

Actually, to be fair Schumer wasn’t picking on Alito.  He promised to try to filibuster every candidate that Bush #41 nominated. In July 2007 he said:

“We should not confirm any Bush nominee to the Supreme Court except in extraordinary circumstances,” Schumer said. “They must prove by actions not words that they are in the mainstream rather than we have to prove that they are not.”

And as far as filibusters go, there is no record of the GOP even trying to filibuster Bubba Clinton’s two picks Ginsburg and Breyer, or Barack Obama’s picks Sotomayor and Kagan.

Verdict: Schumer and the Dems are only telling half the story. Votes of <60 only happen when the candidate is named by a Republican.  It earns three Crying Chuckies in the four Crying Chuckie Lying Scale (named after Senator Schumer himself). Two because he was telling a half-truth and the third because he was ignoring his own statements.

Schumer/Democratic Party Claim Number Two: The Republican Party refused to consider Merrick Garland when Obama nominated him for the court. Therefore this is a Stolen Court Seat

While it is factually true that the GOP-controlled Senate never gave real consideration to Garland, since Hebert Hoover’s failed reelection campaign in 1932 the Senate hasn’t  approved a Supreme Court nomination during a presidential election campaign. The thinking being that it would be impossible to keep the campaign out of the debate about the Court candidate.

OH YEAH? What About Justice Kennedy? When the GOP announced they wouldn’t consider Garland because it was an election year, Senator Chuckie appeared on ABC’s “This Week” and claimed Democrats blocked a pick during an election:

“We Democrats didn’t do this,” Schumer said. “We voted 97-0 for Justice Kennedy in the last year of Reagan’s term

While Anthony Kennedy was approved during Reagan’s last year the reason was that they first slandered and voted down the nomination of a brilliant jurist Robert Bork to the court.

The  Democrats in the Senate led by then Chairman of the Judiciary Committee Senator Joe Biden, and Ted Kennedy didn’t just object to the Bork nomination, they did their best to slander the man, vilifying him as evil. This infamous Ted Kennedy presented the worst of the slanders:

“Robert Bork’s America is a land in which women would be forced into back-alley abortions, blacks would sit at segregated lunch counters, rogue police could break down citizens’ doors in midnight raids, schoolchildren could not be taught about evolution, writers and artists would be censored at the whim of government, and the doors of the federal courts would be shut on the fingers of millions of citizens for whom the judiciary is often the only protector of the individual rights that are the heart of our democracy,”

That was the same Kennedy who was not only responsible for the death of Mary Jo Kopechne but according to one biographer enjoyed jokes about the tragedy, and who during Reagan’s first term told Russia that in the interest of world peace, he will help them fight against President Ronald Reagan’s “militarism.”

Verdict: This is not a stolen seat. Garland was nominated during an Presidental campaign. And the only reason Justice Kennedy was considered is that the Democrats already followed Ted Kennedy’s slander and rejected Robert Bork. This one gets four crying Chuckies. Two for not mentioning the election year, and two for not mentioning Bork.

What Senator Schumer and his Democratic Party buddies are feeding us is pure horse poop. Maybe Senator Chuckie is crying because he has a guilty conscience.