Do Biden And The Dems Think They Can Get Israel To Commit Suicide With Bibi Gone? 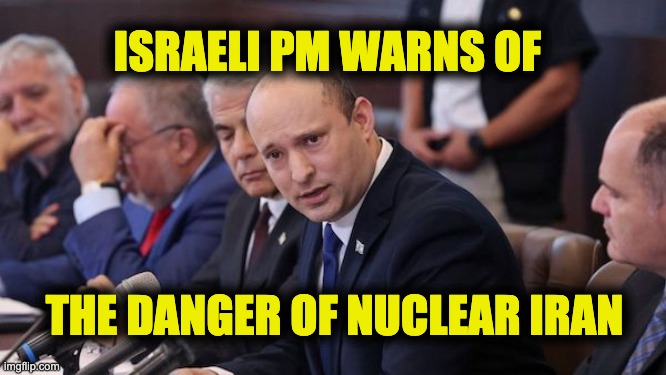 One of the issues where Joe Biden and Binyamin Netanyahu disagreed about the most was Biden’s intent to get back into the Iranian Nuclear deal. But if Biden thought that Israel would drop the topic after they dropped Netanyahu he was wrong. At Sunday’s cabinet meeting in Israel, new PM Naftali Bennett trashed Biden’s intention of getting back into the JCPOA as fervently as Bibi ever did. He warned the US and other nations trying to regenerate the JCPOA with Iran to “wake up” following the election of a hard-line murderer as Iran’s new president. reenter the JCPOA, reenter the JCPOA

Iran ‘elected’ hardliner Ebrahim Raisi as its new president on Friday (well, their version of an election). The president-elect – who will be inaugurated in August – is under US sanctions. His nickname is the “Butcher of 1988,” and he’s been linked to the execution and torture of political prisoners, including children and pregnant women,

Bennett warned that Raisi’s election was “the last chance for the world powers to wake up before returning to the nuclear agreement and to understand who they’re doing business with. These guys are murderers, mass murderers.”

Raisi’s history is what Bennett focused on (for now):

During his first televised cabinet meeting, Bennett said Raisi would bring about a “regime of brutal hangmen,” Reuters reported. Raisi is under U.S. sanctions for human rights abuses, and Bennett claimed Raisi’s electoral victory was the result of influence from Iran’s supreme leader, Ayatollah Ali Khamenei, instead of a popular vote.

Reuters noted that fewer than half of eligible voters in Iran voted in the election.

“Of all the people that Khamenei could have chosen, he chose the ‘Hangman of Tehran,’ the man infamous among Iranians and across the world for leading the Death Committees, which executed thousands of innocent Iranian citizens throughout the years,” said Bennett.

“Raisi’s election is, I would say, the last chance for the world powers to wake up before returning to the nuclear agreement, and to understand who they are doing business with. These guys are murderers, mass murderers. A regime of brutal hangmen must never be allowed to have weapons of mass destruction that will enable it to not kill thousands, but millions,” Bennett added.

“Israel’s position will not change on this,” the Prime Minister concluded.

U.S. sanctions against Raisi were issued shortly after he was appointed to be judiciary chief in 2019 for allegedly playing a role in the execution of thousands of political prisoners in 1988 as well as the suppression of unrest in 2009, CNBC noted. Neither Iran nor Raisi has ever publicly acknowledged the executions.

Neither has publicly acknowledged the executions?  I believe the foreign policy term for that is DUH!  Do they really expect that Iran or Raisi are going to admit they murdered over 30,000 prisoners in one fell swoop?

Biden and the Democratic Party want the U.S. back into the deal because the ‘evil bad orange man’ (President Trump) pulled out of the deal. Trump correctly believed that the JCPOA put the United States in grave danger of an Iranian nuclear attack along with the Sunni Gulf States and Israel. Most of America doesn’t even know what’s really in the original JCPOA because a considerable amount of what Barack Obama and—er, John Kerry told America about the JCPOA was not true.  Because of their reverence toward Obama, the MSM covered up the lies back then. Because of their Trump derangement syndrome and the happiness that Biden is POTUS, the media still not reporting the truth about the deal.

Iran insists its nuclear program is peaceful, the same way some men insist their funny-looking comb-over makes them look like they have a full head of hair.

During the negotiations for the JCPOA, President Obama referred to the Iran Supreme Leader’s Fatwa about producing a nuclear bomb:

“Iran’s Supreme Leader Ayatollah Khamenei has issued a fatwa against the development of nuclear weapons, and President Rouhani has said that Iran would never develop a nuclear weapon.”

That was a nice thought and not the first time Obama referenced the Fatwa, but it was a lie. The Anti-Nuke Fatwa is like the tooth fairy. It’s a nice fable but doesn’t really exist The Supreme Leader never issued that Fatwa, neither did Diana Ross, who was not the supreme leader but the leader of The Supremes. A Fatwa is usually not worth the paper it is printed on, and this one that liberals claim exists hasn’t been printed anywhere. 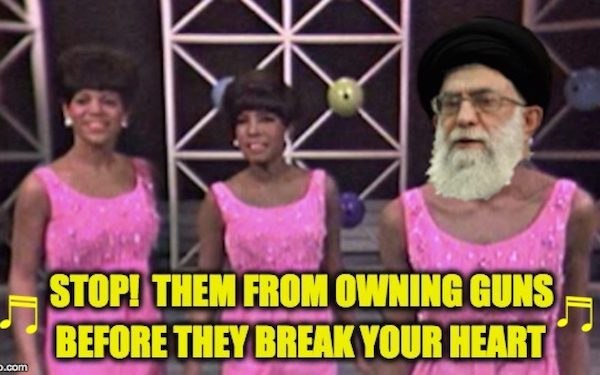 Biden, the Dems, and the JCPOA proponents forget is they’ve been provided with the documentation that Iran’s nuclear intentions were nefarious. In  April 2018, then-PM Netanyahu revealed a Mossad mission into Iran that grabbed a cache of files proving Tehran ran a secret program to build nuclear weapons. Iranian leaders have long said their nuclear program is only for peaceful purposes. But Netanyahu shared tens of thousands of pages of documents (a half ton’s worth) which he said were copied from a “highly secret location” in Iran.

Netanyahu said the information obtained within sometime in February 2018  shows Iran was “brazenly lying” about its nuclear weapons program. The documents Mossad obtained were confirmed as real by the U.S. intelligence agencies.

The JCPOA gives Iran the capacity to enrich for bombs but NOT for power plants. The deal says that Iran can enrich fuel for peaceful purposes. Under the agreement, Iran may keep 5,060 centrifuges. Which per the former deputy director of the CIA, Mike Morell, is enough enrichment to produce bombs but not enough for a nuclear power program.

Biden immediately called to congratulate Bennett last Sunday when the coalition received the necessary votes in the Knesset.  But what he didn’t understand that Naftali Bennett is to the right of Bibi Netanyahu (and he thought that Bibi was too right) he disliked.

Honestly, though, that really doesn’t matter. Although the new coalition includes political parties across a broad spectrum—on one issue, they’re almost totally united.  As Bennett said during today’s cabinet meeting, “A regime of brutal hangmen must never be allowed to have weapons of mass destruction,” he added. “Israel’s position will not change on this.”

Bennett will be as much of a thorn in the side against any new deal as Bibi was against the old. Naftali Bennett will not stop warning America and the rest of the world of their ignorance of Iran’s true intentions. Sadly here in the U.S., Democrats are putting party politics before the safety of their own American constituents, the people in the Sunni Gulf States, and Israelis.

Outside of the Sunni Gulf states who see Shia Iran as an existential danger, much of the world doesn’t really care. After all, what’s the big deal if America is nuked along with a few million Jews in Israel and Sunni Muslims in the gulf states. 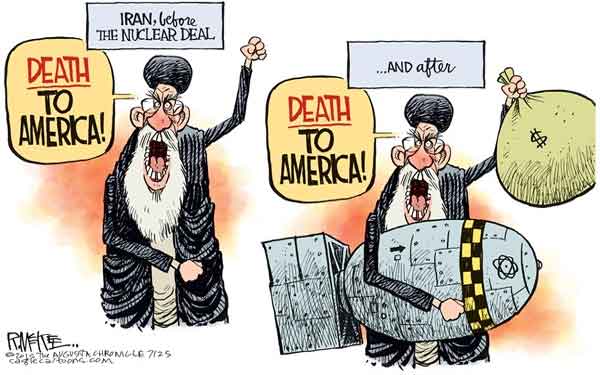