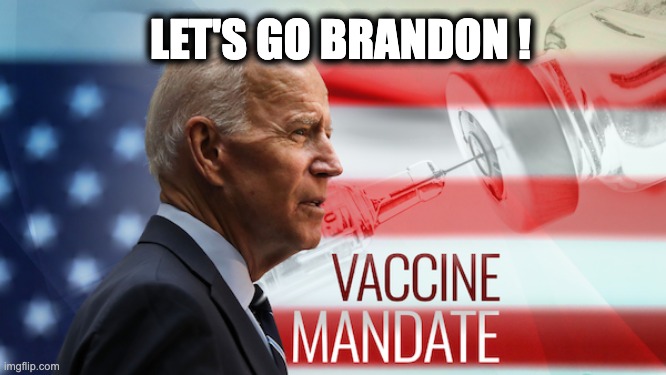 “This is not consistent with a government of limited and enumerated powers, There is no general police power, there is no power to mandate on the American people from the federal government, ” said Florida Governor Ron DeSantis. red states fight back

Five red states have filed a lawsuit against the Biden administration’s plan to force companies to require employees to take coronavirus vaccines. President I mean Biden pressed the Occupational Safety and Health Administration (OSHA) to release new rules on Thursday forcing all nearly all U.S. companies with 100 or more employees to make sure those employees are vaxxed or subject to weekly testing and mask-wearing.

Along with vax demands, Biden also thinks he has the power to issue a federal rule requiring people to wear masks at work. Businesses that do not comply by January 4 may be fined up to $13,653 per violation (meaning per employee who doesn’t comply).

OSHA released the rules on Thursday, triggering a response by red states. The first one to take the leap was Florida. The suit was announced by Governor Ron DeSantis in a press conference Thursday

In response, Arizona, Florida, Indiana, Iowa, and Missouri have each announced plans to sue the Biden administration to halt the mandate. These states are challenging the new OSHA regulations on grounds that the federal government is overreaching and does not have the power to mandate COVID-19 vaccinations for private-sector workers.

“When faceless government bureaucrats dictate what you must inject into your body, that’s the furthest thing in the world from a safe workplace,” Arizona Attorney General Mark Brnovich said in a news release. “The government doesn’t get to be your nanny, and it’s certainly not your doctor.” “This is not consistent with a government of limited and enumerated powers,” Florida Gov. Ron DeSantis said at a press conference announcing his state’s lawsuit. “There is no general police power, there is no power to mandate on the American people from the federal government.”

“Individuals should make informed choices about their own health care,” he added. “They shouldn’t be coerced into getting the jab.”

“This is an overreach of the government’s role in serving and protecting Hoosiers,” Indiana Gov. Eric Holcomb said in a statement. “While I agree that the vaccine is the tool that will best protect against COVID-19, this federal government approach is unprecedented and will bring about harmful, unintended consequences in the supply chain and the workforce.”

“Biden’s plan pits Americans against Americans, while forcing them to choose between making a living or standing up for their personal beliefs. Biden’s actions will only worsen the existing workforce shortages and supply chain issues that hinder our economic recovery,” Iowa Gov. Kim Reynolds said in a statement announcing Iowa’s lawsuit.

It seems likely that many other states will join in on the fun. Let’s Go Bradon.