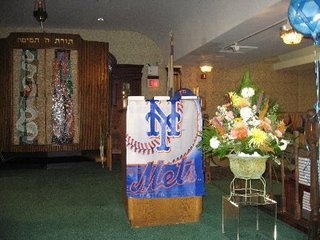 After reading Yahoo news I can definitively tell you why the NY Mets lost last night. Apparently God was so busy talking to Donald Rumsfeld, Iran’s President Ahmadinejad, and Pat Robertson that he didn’t have time to listen to the daily prayers of many a minyan.

“He leads in a way that the good Lord tells him is best for our country,” said Marine General Peter Pace, chairman of the Joint Chiefs of Staff. Rumsfeld is “a man whose patriotism focus, energy, drive, is exceeded by no one else I know … quite simply, he works harder than anybody else in our building,” Pace said at a ceremony at the Southern Command (Southcom) in Miami. Rumsfeld has faced a storm of criticism and calls for his resignation, largely over his handling of the Iraq war. But he got a strong show of support from the military establishment at Thursday’s ceremony, where Navy Admiral James Stavridis took over Southcom’s command from General Bantz Craddock. “He comes to work everyday with a single-minded focus to make this country safe,” said Stavridis who was a senior aide to Rumsfeld before taking on the Southcom job. “We’re lucky as a nation that he continues to serve with such passion and such integrity and such determination and such brilliance,” said Stavridis, 51. As head of Southcom, Stavridis will be responsible for military cooperation with Latin American countries, and will be in charge of the Guantanamo US military base in Cuba where more than 400 “war on terror” detainees are being held. Craddock, who was named supreme commander of allied forces in Europe, hailed the role Southcom has played. “Today I believe that we can say we were successful in our efforts and contributed to ensuring our nation’s security through support on the global war on terror, and encouraged regional cooperation to enhance the security and stability in the region,” he said

Is the Transition to Harris Underway? Why No SOTU Address? Do We Not Have a President?
March 7th, 2021 Conservative Firing Line