30 Years Ago Reagan Uttered His Most Powerfull Words, ‘Mr. Gorbachev, Tear Down This Wall!’ 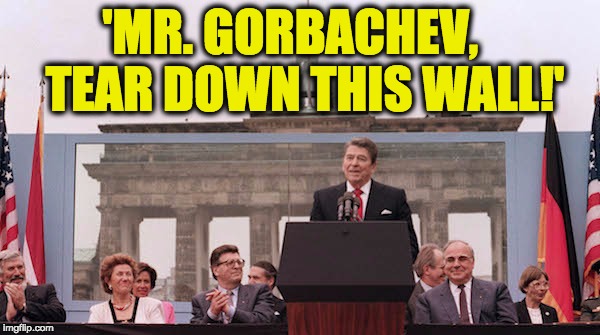 The Berlin Wall was the physical representation of the “Cold War.” The structure across the city of Berlin was not built to protect Communist Germany from the forces of freedom, it was constructed to keep the East Germans from fleeing communism. During the 750th anniversary of the founding of the city of Berlin, on June 12th 1987 President Reagan explained the reasons the wall had to come down in a way no other POTUS has ever had the guts to confront an enemy:

We welcome change and openness; for we believe that freedom and security go together, that the advance of human liberty can only strengthen the cause of world peace. There is one sign the Soviets can make that would be unmistakable, that would advance dramatically the cause of freedom and peace. General Secretary Gorbachev, if you seek peace, if you seek prosperity for the Soviet Union and eastern Europe, if you seek liberalization, come here to this gate. Mr. Gorbachev, open this gate. Mr. Gorbachev, tear down this wall!

In one of the United States greatest victories, just two years after President Reagan made that speech,  the wall was down, communism in eastern Europe was dead and the cold war was over.