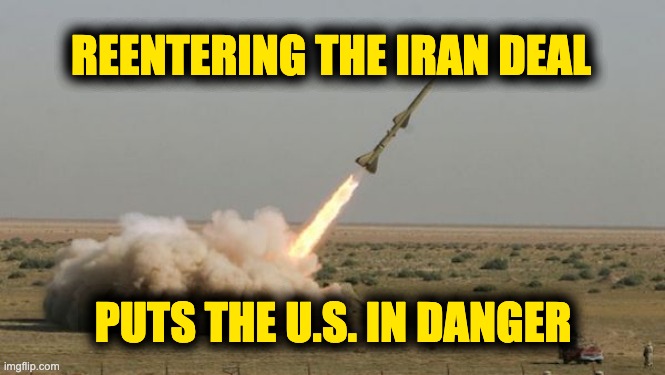 If dementia Joe Biden ends up in the Oval Office, he has promised to re-enter the Joint Comprehensive Plan of Action (JCPOA), also known as the Iran nuclear deal. Last week, Biden aide Amos Hochstein said that rejoining the JCPOA was “high on his agenda,” and he would move to do so shortly after taking office (if he takes office). This Biden priority  proves that former Obama defense secretary Bob Gates was correct when he said Biden has “been wrong on nearly every major foreign policy and national security issue over the past four decades.”  Re-entering the JCPOA will put America (or as Iran calls us) the Great Satan, in great danger. Additionally, it will destroy America’s relationship with the Sunni Gulf States. It will put Israel and the Sunni states in danger and ruin the growing peace process President Trump negotiated between Israel and the UAE, Bahrain, and Sudan. Trump’s peace process is expected to expand to the other Sunni Gulf States.

Re-entering the JCPOA allows Iran to legally enrich nuclear fuel by 2025 and have nuclear weapons by 2025. That doesn’t mean the Mullahs will wait that long. Already they’ve been caught enriching Uranium beyond what is allowed in the deal. They can easily keep the rest of their weapons program secret.

The rogue Iranian regime has been loading up on uranium despite that other countries remain in the deal. Per the latest (11/20)  IAEA report (International Atomic Energy Agency), Iran has created a stockpile of 5,385.7 pounds of low-enriched uranium as of Nov. 2, up from 4,641.6 pounds reported on Aug. 25. The report said Iran has also continued to enrich uranium to a higher purity than allowed in the 2015 deal.

Historically, Saudi Arabia, a monarchy and home to Islam’s birthplace, saw itself as the Muslim world leader. This has been challenged since the 1979 Islamic revolution in Iran, turning the country into an extremist theocracy – that had an explicit goal of exporting this model beyond its own borders. Shia Muslim Iran has stated its goal of replacing and controlling the government of Saudi Arabia and Saudi’s Sunni allies such as UAE, Bahrain, Egypt, Sudan, and Jordan. By pulling out of the JCPOA  and pressuring Iran with increased sanctions, Trump proved to the Sunni countries that, unlike Obama, he had their back against Iran, their real enemy, which motivated the Sunni to accept a relationship with Israel.

The peace process and the sanctions on Iran create greater stability in the Middle East. Along with helping the nations above, stability helps the U.S. A stable region makes it much less likely that American military heroes will be asked to fight in the area, as we have in Afghanistan, Kuwait, Syria, Iraq, and elsewhere.

Re-entering the JCPOA will reverse that trust in America. It will send our relations with Sunni states back to the low point experienced during the Obama administration. Their low trust resulted from negotiating the flawed JCPOA, the Syrian “red line” Obama created and ignored, and abandoning Iraq by pulling out before their army was ready, which allowed ISIS to become powerful and wage war in the region.

We were told that the agreement’s goal is to ensure that Iran will be prevented from building nuclear weapons for the deal’s life. According to an op-ed written by John Kerry and Ernest Moniz published in 2015, the life of the deal is “forever.’  That was a lie. Some of the provisions expire after year 10, and the rest expire after year 15.

Part of the JCPOA requires Iran to reduce the number of centrifuges it operates down to 5,060 centrifuges.  Former deputy director of the CIA Mike Morell told Charlie Rose that number is a large enough program to produce bombs but not enough for a power program. The centrifuge provision expires after ten years. The remaining 14,000 centrifuges do not get destroyed. Most of them will get stored at their Natanz plant for ten years. Afterward, they are available for use. The deal states that one-third of the 1044 centrifuges in the underground nuclear development site at Fordo may be used for isotope production instead of uranium enrichment (they pinky swear?). The process of producing isotopes is very similar to enriching uranium. The remaining two-thirds of the unused centrifuges remain idle for 15 years; afterward, they are too available for use. Additionally, Iran is allowed to build and test gas centrifuges used to enrich plutonium, but they are supposedly allowed to play with only a few of each type for the first ten years. While restrictions are in place, Iran can’t use the gas centrifuges to enrich are allowed to perfect advanced plutonium-producing gas centrifuges. But as you will find out below, Iran does not allow inspections of Fordo or other military sites used for nuclear development, so we don’t know their compliance level.

One of the secret side deals discovered by the AP and America wasn’t told about by the Obama/Biden administration,  allows Iran to upgrade and modernize its centrifuges, thus increasing its enriching capacity, all before the deal officially expires.

There is absolutely nothing in the deal to prevent Iran from building nuclear weapons after 15 years—nothing.

Much of what America was told about the JCPOA was a Lie.

They admitted it in a New York Times Magazine piece Ben Rhodes explained how he led the administration’s efforts to misrepresent the truth in order “to sell” the JCPOA to the press. This post fills in the blanks.

There are no anytime anywhere inspections: Because of a secret side deal revealed by the Associated Press long before the deal was agreed to, Iran gets to self-inspect the Parchin military base with no IAEA inspectors present. Parchin is the site where Iran was working on nuclear triggers for its bomb program. All other military base inspections are allowed under the JCPOA.   The  agreement specifically “requests the Director-General of the IAEA to undertake the necessary verification and monitoring of Iran’s nuclear-related commitments for the full duration of those commitments under the JCPOA.”  But the Iranian authorities claim military sites are off-limits to the IAEA. Sadly the IAEA and the countries that stayed in the deal refuse to push the point because they don’t want Iran to seem non-compliant. One of the problems with this refusal involves “Section T” of the deal. In Aug. 2017, the IAEA’s announced that it has been unable to verify a vital part of the JCPOA, “Section T.”   That part of the deal outlines “Activities which could contribute to the design and development of a nuclear explosive device.” That inability doesn’t mean Iran violated “Section T.” It means is your guess is as good as mine because nobody knows — but the deal says the IAEA is supposed to inspect.

The JCPOA Reduced Iran’s Reporting requirements: The Iran nuclear deal significantly reduces the reporting requirements about Iran’s nuclear program that existed before. According to the former IAEA Director General Yukiya Amano,  Iran threatened him with harm if he reveals anything about the side deals.

The promised sanction “snap-backs” don’t really exist.  President Obama gave Europe, China, and Russia a written promise that the US will guarantee their companies who make deals with Iran would not have to stop working with Iran should sanction need to be re-imposed should Iran get caught violating the JCPOA. Even without the letter, any snap-back would have to be approved by the UN Security Council, Iranian allies Russia and China would veto any snap-back proposal.

The nuclear deal lifted the ban on Iranian ballistic missile development: The JCPOA lifted the Iranian ballistic missile program’s ban. Before the deal UN Security Council Resolution (UNSC) 1929, the council used mandatory language about ballistic missiles. It said, “It decides that Iran shall not undertake any activity related to ballistic missiles capable of delivering nuclear weapons.” The P5+1 resolution passed by the UNSC changes the language.   Page 119 of the UNSC approved deal does not prohibit Iran from carrying out ballistic missile work. Instead, it asks them not to carry out ballistic missile development.  The resolution merely says, quote, “Iran is called upon not to undertake such activity.”    The changed language issue was raised at a July 2015  Senate Foreign Relations Committee hearing where Sec. Kerry was trying to sell the agreement. Kerry was questioned by Sen. Menendez about the change in wording. The ensuing conversation (below) suggests Kerry was lying, totally clueless, or both. Menendez kept reading aloud from the old and new resolutions, switching from “shall not” to “called upon not to,” while Kerry kept insisting that the different words were precisely the same.

Iran never reported to the IAEA Their nuclear History: Iran had been non-compliant with its obligation to reveal its nuclear history. According to the JCPOA, the rogue nation was supposed to disclose its pre-deal nuclear program. This was a condition for implementing the agreement.  The historical knowledge is necessary so the IAEA will know how, when, and where to inspect Iran’s future actions. When it came time to “fess up,” Iran told the IAEA that it never had a nuclear program. The IAEA reported what it was told instead of pushing back against a blatant lie.  This is another example of a breach of the accord that was published as compliance.  In other words, the entire agreement was based on a lie and should never have been implemented.

Using information secretly gathered by a Mossad operation in Iran and verified by the United States in April 2018, Israeli Prime Minister Binyamin Netanyahu exposed a significant lie in the information the Iranians supplied to the IAEA for its 2015 report. Iran not only had a nuclear weapons program (called Amad), but after it was supposedly canceled in 2013, the program continued.

Iran has been violating the deal: Per The Institute For Science And International Security that goes by the unfortunate acronym of ISIS (but it’s the good ISIS), in its November 2019 report, the IAEA found many Iranian violations of the JCPOA.

As president, Joe Biden would be a continuation of the Democrats’ march toward socialism. Not often discussed, however,  that much of his foreign policy, such as their desire to re-enter the JCPOA, will put the United States in grave danger.