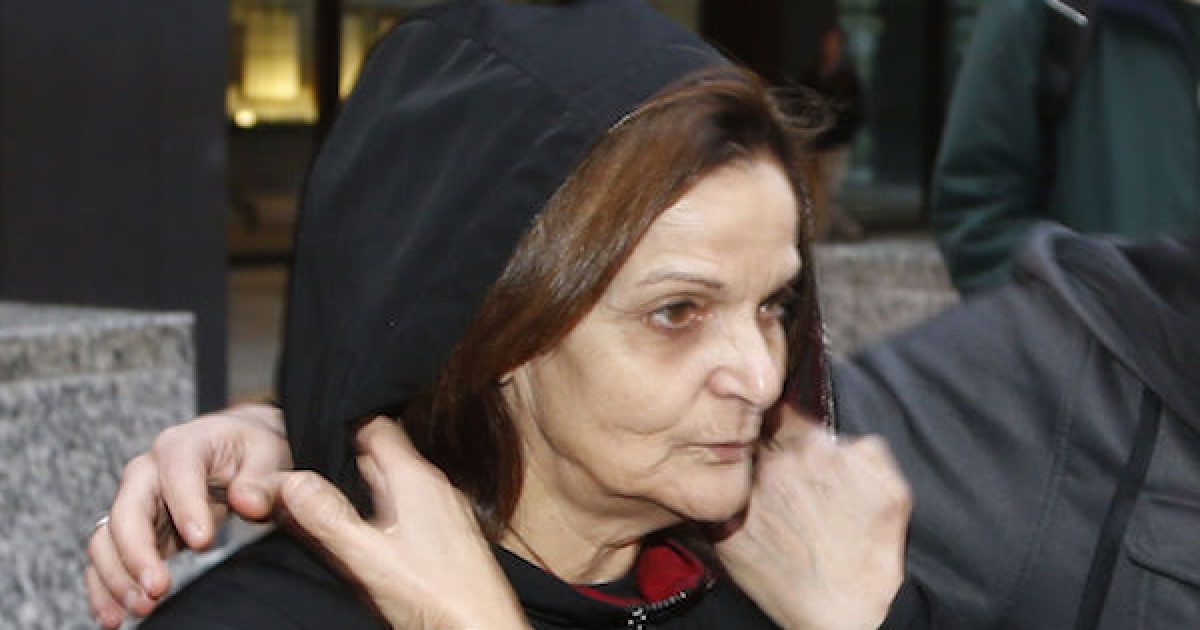 After years of legal wrangling and a change in U.S. Presidents, 70-year-old Chicago Palestinian murderer Rasmea Odeh officially lost her citizenship and was deported from the United States last week for concealing her murder/conviction of two Israeli college students.

Of course, if you follow the media reports you wouldn’t know that Odea murdered two kids, For example, the Chicago Sun-Times buried the lede in their story.

The 70-year-old Palestinian immigrant, whose U.S. citizenship was revoked by Immigration and Customs Enforcement for not disclosing having served time as a prisoner in Israel, didn’t cry until the end, only after ICE refused her huge crowd of supporters entry into the airport.

The Chicago Tribune’s lede (from the Associated Press) was just as whitewashed:

70-year-old Chicago Palestinian activist who was deported from the United States for concealing a decades-old bombing conviction arrived in Jordan on Wednesday.

The truth is that Rasmea Yousef Odeh spent a decade in an Israeli jail for her involvement in two terrorist bombings made while she was a member of the Popular Front for the Liberation of Palestine (PFLP). One of those attacks, a 1969 bombing of a Jerusalem Supersol Supermarket killed two Hebrew University Students Edward Joffe and Leon Kanner while they were shopping for groceries.

The Palestinian born Odeh was sentenced to life in prison for being the ringleader behind the Supersol bombing as one at the British Consulate in Jerusalem (the bomb was found and disarmed before exploding). After spending ten years in an Israel jail Odeh was released with 77 other terrorists in an exchange with the PFLP for an Israeli soldier captured in Lebanon.

For her immigration crime, Rasmea Yousef Odeh was, sentenced to 18 months in prison, stripped of her citizenship, and considered for deportation. However, Odeh maintains she lied because she had post-traumatic stress disorder from the Israeli police sexually torturing and raping her to get a confession.

According to her defense committee, Odeh falsely confessed after being viciously tortured and raped by Israeli military authorities for weeks. There is plenty of evidence that claim is a lie

However website Legal Insurrection presented a report from JTA on March 3, 1969, only three days after Odeh’s arrest,  the three key perpetrators of the SuperSol bombing — which would have included her — had confessed (emphasis added):

Odeh’s U.S. attorneys appealed based on the fact that “Federal Judge Gershwin Drain allowed the Israeli military court conviction to be entered into evidence, but barred testimony about her torture at the hands of her Israeli captors. That ruling eliminated the testimony of expert witness Dr. Mary Fabri, a clinical psychologist who has decades of experience working with torture survivors. Fabri was prepared to testify that the allegedly false answers on the immigration forms were the result of Rasmea’s chronic Post-Traumatic Stress Disorder (PTSD).”

One of Rasmea Yousef Odeh’s fellow terrorists on the mission, Aisha Odeh confessed to the attack on Palestinian TV and gave her cousin Rasmea the credit for being the ringleader.

Rasmea Yousef Odeh didn’t hang around doing nothing while awaiting the new trial. On February 6th, she joined other radicals to write a manifesto for the March 8th Day without women protest. Her cohorts included Angela Davis, a self-professed communist professor (now retired), a member of the original Black Panthers and a 1960s-radical icon. Davis was prosecuted and acquitted in 1972 for an armed takeover of a California courtroom that resulted in the murder of a judge. Other co-authors included Maoism supporter Tithi Bhattacharya (Maoists are considered a terrorist group), as well as Linda Martín Alcoff, Cinzia Arruzza, Nancy Fraser, Barbara Ransby, and Keeanga-Yamahtta Taylor in writing a manifesto calling for the protest.

Soon after that early March protest, on March 23, 2017, Rasmea Odeh accepted a plea agreement where she will serve no prison time but will be stripped of her U.S. citizenship and deported. She was finally sent back to Jordan on Sept. 20th. America is a better country with her exit.

America is a better country with one less murderer after her exit.

Note the media complained she was sent to Jordan where she knew no one…like much of what the media wrote about this terrorist…that wasn’t true.

UPDATE: Family & friends of #RasmeaOdeh are waiting for her to finish customs in Amman, Jordan