Rashida Tlaib on Abortion: ‘Maybe You Shouldn’t Want to Have Sex With Me’

Rashida, That's Not A Maybe, Just The Thought Gives Me The Creeps 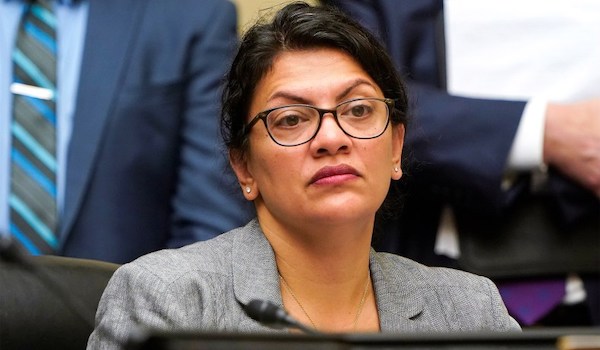 Speaking at an anti-life rally outside the Supreme Court on Wednesday, Rashida Tlaib said those who don’t approve of abortion “shouldn’t even want to have sex with me.” Well, that’s just one more reason to be pro-life. This was the same rally at which Senator Chuck Schumer famously threatened Supreme Court justices if they rule against the pro-abortion mob.

Tlaib, the poster child of unhinged rants, continued Schumer’s example by delivering, well … an unhinged rant. The Minnesota Democrat wants you to know she’s caught on. She knows her opposition is obsessed with women’s bodies at least in her humble opinion

“This past year, I realized — my, my, my are they obsessed with our bodies, how we talk, how we look, what we stand for — I mean this type of policing of our bodies is so interconnected to all the social justice movements all around the country,” Tlaib said.

Talk about delusions.  Until she brought this up I never realized Tlaib had a body and a woman with such an ugly heart could never be considered attractive. Or as Shakespeare wrote in A Midsummer Night’s Dream, “I am sick when I do look on thee “

“You know I, in the legislature, in the Michigan legislature for six years, I used to say to people, ‘Yo yo, you know what? You’re so freakin obsessed with what I decide to do with my body, maybe you shouldn’t even want to have sex with me,’ or with you, or with any woman,” she said gesturing wildly.

Sorry, Rep. Tlaib. It’s not a maybe—it’s a definite no. Rashida what makes you think that people wanted to have sex with you? After all, as Dorothy Parker reminds us, “Beauty is only skin deep, but ugly goes clean to the bone.” And your hate-filled personality makes you ugly.

Tlaib is a perpetual embarrassment to a political body already ranking quite low in terms of public respect.

At the same rally, another speaker celebrated her abortion at the age of 19 as “one of the best decisions of my life.”

Might be going out on a limb here, but we can guarantee it was the worst decision of the brief life of that baby.

.@RashidaTlaib at today’s abortion rally: “Yo yo, you know what, you’re so freakin' obsessed with what I decide to do with my body, maybe you shouldn’t even want to have sex with me!”

Adds that pro-life pols are “commercializing” women’s bodies to make them “less than." pic.twitter.com/yTt10nNvdY

Not a Sane Person

Tlaib’s rant is another in a long line of disgraceful, unprofessional behavior by the Democrat lawmaker.

This is the same person who trashed President Trump and said she was going to “impeach the mother******” on her first day as an elected congresswoman.

The same person who was forcibly dragged out of a campaign event in 2016 by Secret Service agents after she became unruly.

“This is not a sane person, folks,” President Trump said upon seeing the video of Tlaib acting like a child. “And this is what we’re up against.”

You would think that being elected to the House of Representatives would have given Tlaib a moment to pause and perhaps start acting like a civilized individual.

Instead, she’s talking about having sex with her,  yo, yo, ewwww.