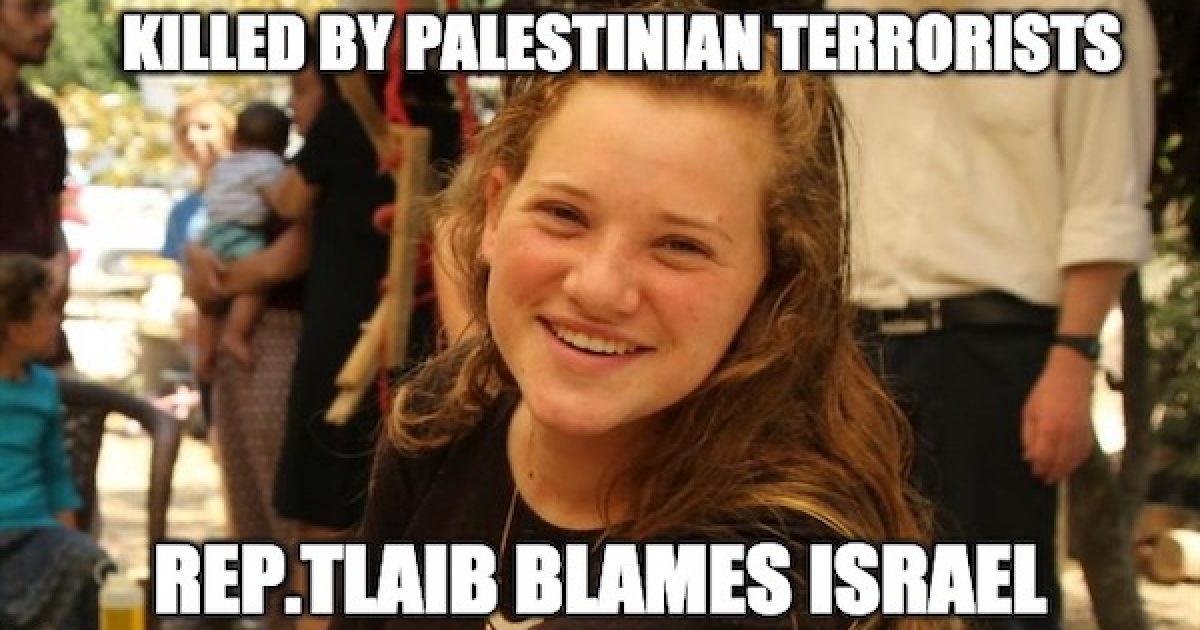 Major news media are trumpeting what they say was Tlaib’s condemnation of the bombing attack last Friday, in which 17-year-old Israeli Jewish girl Rina Shnerb was murdered, and her father and brother were severely wounded. The murder took place on the ninetieth anniversary of the Hebron massacre, where a Palestinian Arab mob attacked a Palestinian Jewish city killing sixty-seven people many of them children.

Rep. Tlaib’s response to the attack was significant. As the first and only Palestinian-American in Congress, she now has considerable influence among Palestinian Arabs. She has the power to send a meaningful message to the Palestinian public. She can tell them that murdering Jews is immoral and that there can be no excuses for it.

Instead, she did precisely the opposite.

Rep. Tlaib’s response came in the form of a tweet. It began, “This is absolutely tragic & horrible,” which sounded like the start of a heartfelt condemnation. But the condemnation never arrived. In fact, she couldn’t even bring herself to use the word “condemn.” Tlaib wrote: “More than ever we need to support nonviolent approaches to ending the Israeli occupation and guaranteeing equal rights for all.”

This is absolutely tragic & horrible. My heart goes out to Rina's family. More than ever we need to support nonviolent approaches to ending the Israeli occupation and guaranteeing equal rights for all. Extremism that puts innocent lives at risk moves us no closer to peace. https://t.co/lQ4qrYf6ig

She did not criticize the bombers. She did not say that the bombing was morally wrong. She didn’t even say that violence, in general, was bad or wrong. All she said was that it was “tragic” that the girl died, in the vague sense that all deaths are sad events. And she supports “nonviolent approaches.” Could she be implying that she supports nonviolent methods in addition to the violent ones?

Putting Tlaib’s hypocrisy aside, the most essential aspect of Tlaib’s tweet is how she rushed to bring in “the Israeli occupation” and “equal rights.” She was saying, loud and clear, that Israeli policies are to blame for the violence.

This is remarkable because nobody is being “occupied” or “denied rights” at the site where the murder took place. It’s a natural spring in the wilderness. There are no Palestinians there who are being “occupied.” There is no Israeli “settlement” there. Nobody is being denied any rights. Arabs and Jews both visit the site freely.

There was one final sentence in Tlaib’s non-condemnation: “Extremism that puts innocent lives at risk moves us no closer to peace.” Notice the words missing from that sentence: “Palestinian” and “terrorism.”

The words “Palestinian” and “terrorism” do not appear anywhere in the tweet. Congresswoman Tlaib could not bring herself to explicitly acknowledge or condemn Palestinians for murdering Jews, nor would she call those murders “terrorism.” Instead, she equivocated, rationalized, and ducked.

A vague phrase such as “Extremism that puts innocent lives at risk” is a little moral-equivalence word game that Tlaib is playing. It’s a way for Tlaib to pretend that she was talking about Palestinian extremism when what she really intended was “Israeli extremism.” If a reporter pressed her to explain whose “extremism” she was citing, she would no doubt resort to the moral-equivalence strategy of saying that she was referring to both Israelis and Arabs—as if bombers and their victims should ever be considered equal.

Rashida Tlaib has managed to issue a “condemnation of Palestinian terrorism” that does not have in it the words “condemn,” “Palestinian,” or “terrorism.” She has managed to blame the Jews for the murderous attack upon them. And she has accomplished, once again, to make an utter mockery of the truth.