Rashida Tlaib Is All Smiles With PYM, A Group That Glorifies Terrorism 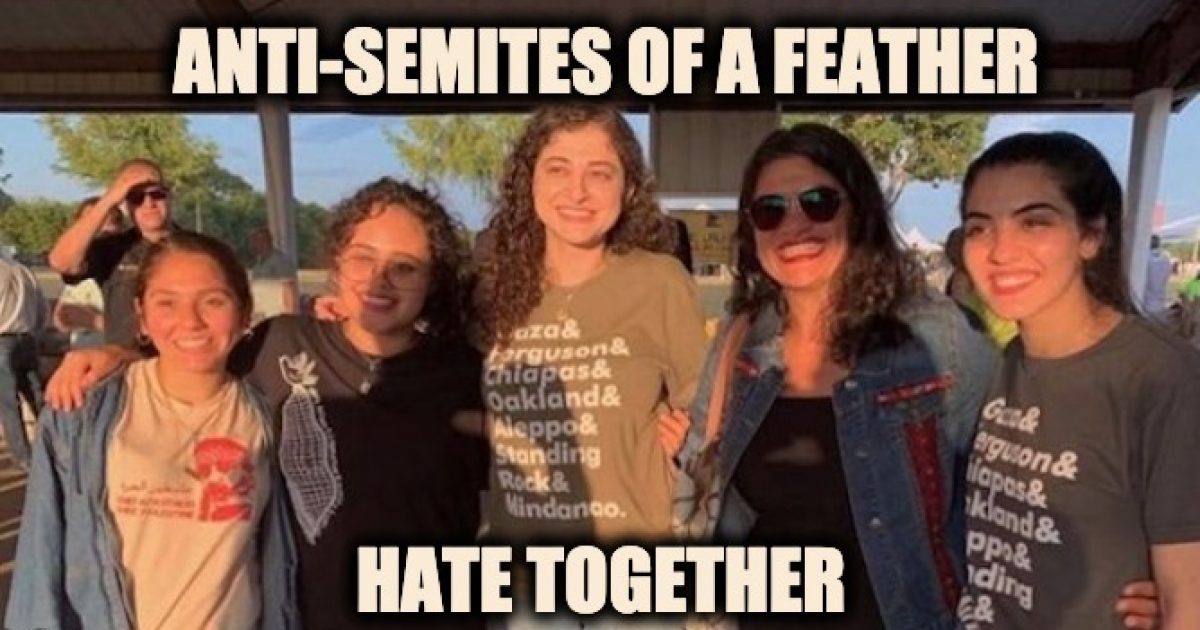 “A man is known by the company he keeps.” Those sage words, penned by fabulist Aesop, apply to Rep. firebrand Rep. Rashida Tlaib, who met and posed for pictures with an anti-Israel group that encourages violent resistance to Israel either “by pen or gun.”

The Palestine Youth Movement (PYM), a group of staunch supporters of the Boycott, Divestment, Sanctions (BDS) movement, met with Tlaib (D-Mich.) at the Arab Texas Festival in Dallas. BDS has even been denounced by House Speaker Nancy Pelosi as being anti-Semitic, anti-American, bigoted, and dangerous.

What else do we know about the PYM? The group was set to host an event at a Toronto church earlier this year, but the event was canceled after it was revealed that the group underwrites terrorism. “We will not tolerate the open glorification of terrorists and murderers, particularly in a place of worship,” a letter from a Jewish advocacy organization said. “Churches should be places of peace, not places where violence and/or terror are glorified.”

PYM-USA, in 2017, wrote a letter of support for the leadership of a terrorist group designated by the State Department and Treasury, and pushed for violent “resistance … whether by pen or gun” against Israel.

The PYM has also been accused of affiliations with the Palestinian-Marxist organization, on the U.S. government’s list of Foreign Terrorist Organizations since 1997.

Even against that backdrop, Tlaib was all smiling in her photo-op:

Congresswoman Rashida Tlaib with members of the Palestine Youth Movement at the Arab Texas Festival of Dallas. [Photo by @PYM_USA] pic.twitter.com/tdsy35kXSa

No surprise here, as Tlaib and her fellow anti-Semitic freshman in Congress, Ilhan Omar, defended terror attacks on Israel earlier this year.

In May Palestinian militants launched over 600 rockets into Israel killing four civilians, something the Jerusalem Post described as an “Islamic Jihad.”

Israel responded to the attacks with precision airstrikes.

But Tlaib took exception to a media headline that described the terrorists as “Gaza militants,” saying such reporting “dehumaniz[es] our Palestinian people.” I take exception to the headline for a different reason, It should have read Gaza Terrorists.

When will the world stop dehumanizing our Palestinian people who just want to be free? Headlines like this & framing it in this way just feeds into the continued lack of responsibility on Israel who unjustly oppress & target Palestinian children and families. #FreePalestine https://t.co/p3X3j8WtwM

Omar, another well-documented anti-Semite, accused Israel of killing small children by acting in self-defense. “How many more protesters must be shot, rockets must be fired, and little kids must be killed until the endless cycle of violence ends?” she asked, seemingly unaware that no one would be killed if Palestinian militants stopped launching rockets into Israel.

This past July, another member of the “Squad,” Alexandria Ocasio-Cortez, also lifted the veil on the group’s hatred of Israel. In an interview on a hip-hop program, she accused the governments of Israel and the United States of being “corrupt” and on par with Russia and Saudi Arabia, suggested Israel is “criminal” in its treatment of Palestinians and encouraged the Palestinian people to “riot” against Israel.

Ladies and gentleman, I give you your new Democrat party.

Cross posted with the Mental Recession