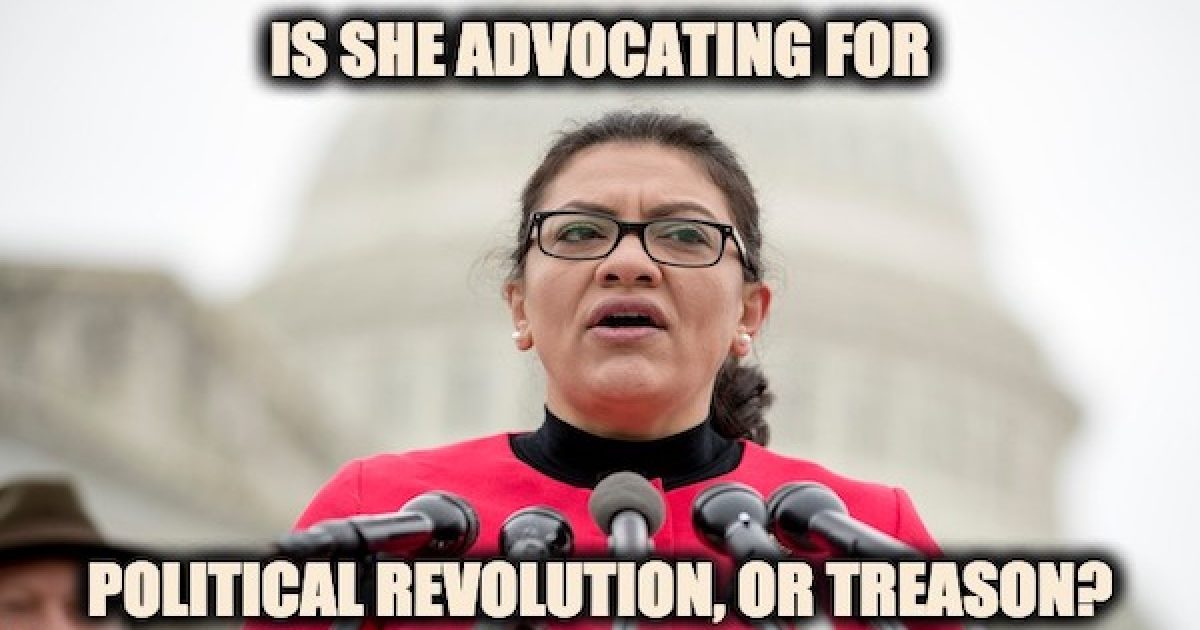 Somehow, I’ve heard this before. Rashida Tlaib talks about an unconstitutional change in the American political system out of one side of her mouth and  American unity out of the other.

Yesterday, the New York Post ran a 9/11 remembrance piece that quoted the heart-felt reaction of two of the “Squad” members — Ilhan Omar and Rashida Tlaib — who were old enough to remember the attacks by 19 adherents to their faith. Alexandria Ocasio-Cortez, “who was 11 when the hijacked planes struck the Twin Towers, retweeted a video posted by House Speaker Nancy Pelosi showing lawmakers observing a moment of silence in Washington.” (No doubt she would have had something brilliant to say if she had been older at the time.)

Both Omar and Tlaib were uncharacteristically somber in their recollections, probably because the “Squad” had been slammed at the memorial ceremony by a man who lost his mother on 9/11, and the two felt it would be prudent to appear less anti-American than usual.

I will never forget 9/11. I was working at a non-profit Arab American organization, ACCESS, while in law school. My day started like any other, until I heard gasps from my co-workers in the lunch room. I rushed in and saw faces of shock facing the television.

Then we saw a plane hit the second tower and the room erupted in tears and heartbreak. Our country was being attacked.

After detouring from her message to claim her organization’s phones were swamped with threats of violence, which sounds far-fetched, she continued:

Still, our communities came together to mourn, to stand in solidarity with our fellow Americans across the country to reject the hate and terror that comes from it.

As we remember all of the lives lost from that horrific attack 18 years ago today, let us remember to not allow this type of violence to divide us, but to stand united. We are stronger together. [Emphasis added]

Contrast the highlighted words with the divisive message on Twitter Tlaib delivered last Saturday, calling for a political “revolution,” adding that she would like to change the entire political system in America.

“We have to make the tough, courageous changes that completely transform a political and economic system that is now built for corporations (and profits), not people,” she said.

“Choosing the status quo means doing nothing and giving up. We need a political revolution,” she added.

We have to make the tough, courageous changes that completely transform a political and economic system that is now built for corporations (and profits), not people.

Choosing the status quo means doing nothing and giving up.

We need a political revolution. https://t.co/gEBzbgQsdP

Tlaib wrote the tweet in reference to a June interview she gave to Next Left. The Michigan lawmaker talked about how she and her fellow “Squad” members are “pretty new” to the political arena as women of color and argued that they are “easy targets because people easily will fear us if they just tell people, ‘Be scared.’”

“‘She’s Palestinian, you should be scared. She’s also Muslim. Be scared,’ but it’s because you know the, the GOP, the individual one in the White House, is feeding into hate because that’s all they have right now,” she said, placing the blame squarely on President Trump.

“They don’t have a plan. They don’t know what they’re going to do about infrastructure. The health-care crisis, the immigration, humanitarian crisis that we’re facing right now in our country, it’s pretty unprecedented what we’ve seen in our country,” she continued, adding that there is a “real human impact” of “doing nothing.”

“You know, this is an institution that is very much broken right now and very much in need of an injection of, you know, looking at the real human impact of doing nothing,” she said.

As Breitbart notes, this isn’t the first time Tlaib has accused the president of attacking her and her fellow far-left “Squad” members.

Reaction on Twitter was pretty much what you’d expect:

Without profit, Americans would be reduced to slave labor. Workers must be compensated for their work.

Socialism is not answer, Capitalism is.

Political revolutions lead to civl war and death, which is something we don’t need.

The only changes we need is the removal of you and your buddies.

That Tlaib would promote radicalism only days before the 9-11 anniversary seems tone deaf, especially given her ties to actual terrorists groups. That she’d promote her particular brand of Marxist-styled revolution in this prosperous economic climate is outright ignorant of her.

You’re a Communist and the only way your ideology would ever be in place, here, is by force.

And my personal favorite:

We had a revolution. We elected @realDonaldTrump! And it’s working out great! #KAG2020 https://t.co/Mz3i8biUnH…

Actually, we already had a revolution, one that led to the nation’s founding and the Constitution. It sounds to us as though Tlaib wants to undo all that and turn America into something else. What could she possibly have in mind? Cheryl Chumley of the Washington Times knows:

This is not simply a difference of political differences; a Democrat view versus a Republican view. This is treasonous. It’s treason wrapped in a social justice ribbon.

And politicians who call for America to toss aside its Constitution, rip up its republic and instead go socialist — who call for complete economic and political overhaul and “revolution” — don’t deserve to serve in public office.