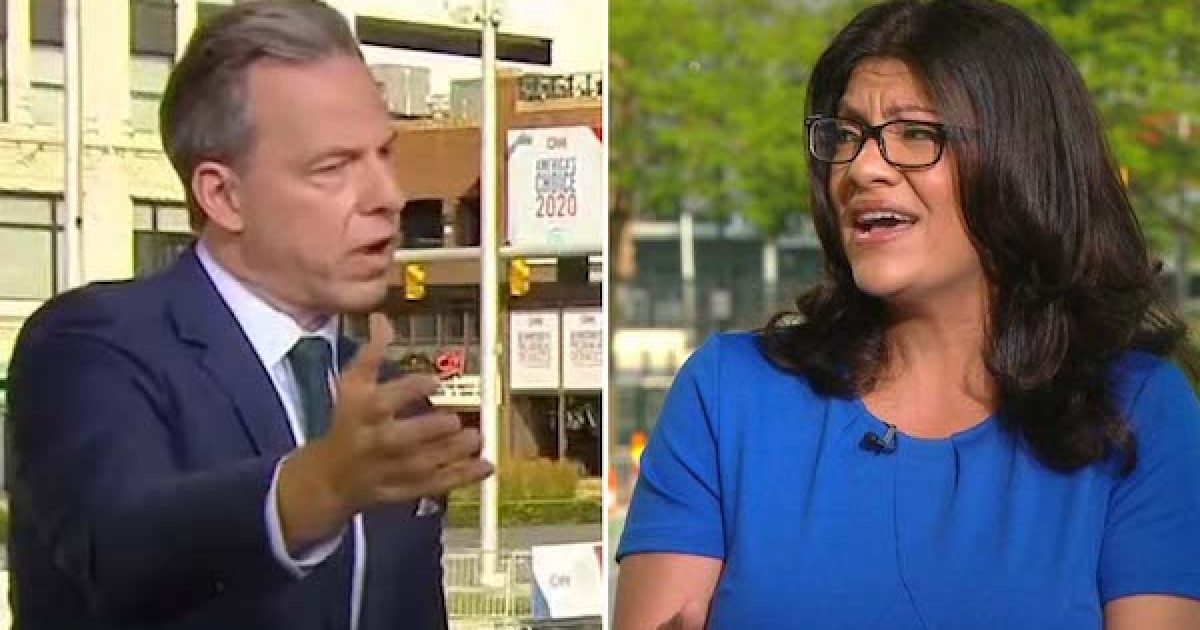 On Sunday, Rep. Rashida Tlaib (D-MI)  was interviewed by CNN’s Jake Tapper on his “State of the Union” program. Jake tried to pin Tlaib on BDS and her position on Israel as a Jewish state, but she “tap-danced” away.

First, she denied that BDS was an Anti-Israel or Anti-Semitic movement.

“No, it’s anti — it’s criticizing the racist policies of Israel. And it’s a boycott, right? I mean, I think folks don’t know, when you say BDS — especially in around the country when you say BDS, they don’t — they know not sure what it means”.

Racist? Muslims and “people of color” have leadership positions in Israel, there is not a Jew in the leadership of the Palestinian Authority. Who exactly is the racist?

Later on in the interview, Tlaib claimed:

“But people want to dismiss it because they’re trying to say it’s anti- Semitism. That’s the way they’re trying to discredit the fact that we all know, under Netanyahu’s regime, human rights violations have gotten worse. And we need to be able to…”

Well, she is correct there but not the way she intended. During Netanyahu’s term Prime Minister, there’s been Palestinian rockets sent to civilian areas of Israel from Gaza and Lebanon, stabbing attacks against Israelis, and other terrorist attacks.  Those Palestinian terrorists are human right’s violators.

Tapper’s final question on the subject of Israel was the big one.

“Do you think the Jewish people have the right to a state in the area where Israel exists now?” Tlaib answered, “Look, I truly believe the state of Israel exists, correct.”

Her answer was a non-answer. Of course, the State of Israel exists; it was in all the newspapers. Heck, even Barack Obama would say that Israel exists (although he tried to change that).  Rep. Tlaib refused to answer the part about Jews having the right to a state. Per the U.S. State Department, and Pope Francis not believing the Jews have the right to a state of their own is an example of Antisemitism.

Ms. Tlaib went on to compare the Palestinian movement to the Civil Rights movement,

“And I can tell you, I learned that from my African-American teachers in Detroit public schools, who showed me what the pain of oppression looks like. We’re not going to have peace if we don’t understand that we are dehumanizing Palestinians every single day when we choose Israel over their rights.”

Tapper tried again but made the mistake of omitting part of his original question Jewish part. “But, yes or no, does Israel have a right to exist?” he asked, letting the Congresswoman off the hook.   “Oh, of course,” she said.

It is a stated policy of the Palestinian Authority to use the “right of return” to flood Israel with Palestinian Muslim descendants of the original refugees. That way the can use the fact that Israel is a democracy to ensure that Israel is no longer a Jewish state.

But Tlaib does want one without the other.  As reported by the Forward, “A change was made to the map in Rashida Tlaib’s office the day she was sworn into Congress: a Post-it Note smacked next to Israel, pointing to Palestine.”

Someone has already made a slight alteration to the map that hangs in Rashida Tlaib’s new congressional office. pic.twitter.com/mwyshIog4r

Understand that it is not just Rep. Tlaib, after barely eight months in office, the Squad including Tlaib and Reps Pressley (D-MA), Omar (D-MN), and Ocasio-Cortez (D-NY) have reached a level of notoriety unheard-of for freshmen House members.  And three out of the four squad members, Tlaib, Omar and Ocasio-Cortez are strong supporters of the BDS movement. Rep. Pressley does not support BDS but has supported one-sided anti-Israel legislation accusing the IDF of “military detention, interrogation, or ill-treatment of Palestinian children.”

Also disturbing is that despite their anti-Israel and anti-Semitic positions, Long Island congressman Tom Suozzi (D-NY) whose district is one of the top five Jewish Congressional districts in America was on MSNBC’s Morning Joe program two weeks ago.  He requested to be an honorary member of the Squad. While his reason had nothing to do with BDS, there is no excuse for him to associate with this anti-Israel gang of four.

It’s all just additional proof of something indicated on this site many times before, it’s time to for American Jews to wake up and smell the hummus, the Democratic Party has become the Anti-Israel and Anti-Semitic party. Continuing to blindly support them is nothing short of Jew-icide.

Note: The Tapper and Tlaib quotes were taken from the CNN transcript of the Sunday 7/28 “State of The Union.”